Guillain-Barre Syndrome (GBS) and Chronic Inflammatory Demyelinating Polyneuropathy (CIDP) are both autoimmune neuropathies. This means they are diseases in which the immune system attacks its own nerves. 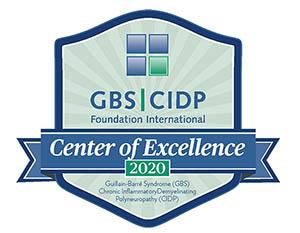 A disease is called demyelinating when the myelin sheath, the protective covering that surrounds nerve fibers, is damaged. CIDP by definition almost always involves some degree of demyelination, while GBS can be both demyelinating and axonal (where the nerves are directly damaged by the disease).

Guillain-Barré (Ghee-yan Bah-ray) Syndrome (GBS) is an inflammatory disorder of the peripheral nerves outside the brain and spinal cord. One of its most common subtypes is called Acute Inflammatory Demyelinating Polyneuropathy (AIDP) or Landry’s Ascending Paralysis.

GBS is characterized by the rapid onset of numbness, weakness, and often paralysis of the legs, arms, breathing muscles, and face. Paralysis is typically ascending, meaning that it travels up the limbs from fingers and toes towards the torso. Loss of reflexes, such as the knee jerk, help solidify the diagnosis.

The cause of GBS is not clearly defined, though 60-80 percent of cases are preceded by a viral or bacterial infection. GBS is neither hereditary nor contagious. Ninety-five percent of patients recover to varying degrees. Recovery may take 6 months to 2 years and pain, numbness and muscle aches may persist.

Chronic Inflammatory Demyelinating Polyneuropathy (CIDP) is a rare disorder of the peripheral nerves characterized by gradually increasing sensory loss and weakness associated with loss of reflexes. The covering of the nerves, called myelin, is damaged. CIDP can start at any age and is more frequent in men than women. It is neither hereditary nor contagious.

The number of new cases per year of CIDP is about 1-2 per 100,000 people, but as the disease can be present in a person for years prior to diagnosis, the prevalence reflecting the accumulation of cases over time may be slightly higher in some areas.

A physician referral is required for the Peripheral Neuropathy Center. To schedule an appointment, call us at 734-936-9010 or have your physician call M-Line at 800-962-3555 to refer you as a patient.