Dr. Dinesh Khanna, Director of the University of Michigan Scleroderma Program, has written extensively on the gastrointestinal involvement in scleroderma.  Click on this link to read the medical report written for patients.

The healthy intestine is a long muscular tube, beginning from the muscles used in swallowing to those used in bowel movements. In each section of the intestines, the muscles are controlled by the nervous system and ordinarily function in a well-coordinated series of contractions to move food through the digestive system.

In scleroderma, the muscles of the intestines become weakened and ultimately get replaced by scar tissue. Thus symptoms arise related to where the muscle damage is and how severe it becomes. The muscle injury is thought to begin with poor blood supply and damage to the tiny local nerves that control the muscle function. At present, there are no treatments that are known to be effective in stopping or reversing the muscle injury. However, there are excellent treatment strategies for most of the major symptoms.

At the base of the esophagus (swallowing tube) is a muscular valve or sphincter which opens to let food into the stomach, then closes to prevent stomach acid from washing back into the esophagus. In scleroderma, this sphincter becomes weakened and the valve doesn’t close well. Acid washes back into the esophagus causing the symptom of heartburn. If acid irritation is not suppressed, the esophagus lining becomes inflamed and may be a source of bleeding. Over time, the inflamed areas may scar, leading to difficulty in swallowing. Many patients describe a “sticking” feeling where liquids seem to go down well but solid food gets stuck in the midchest 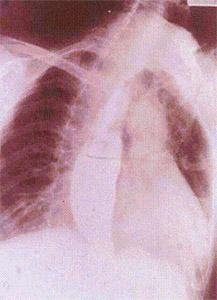 This is an X-ray study showing a
dilated weakened esophagus.

In many patients, the muscles of the lower esophagus also become weakened. Swallowing includes active muscular pushing of the food down the esophagus. This is why astronauts can swallow in weightless environments and that healthy people can swallow upside down. This weakening of the lower esophagus also leads to complaints of food sticking in the midchest area. Acid that gets into the esophagus tends to remain there longer, making acid irritation problems more severe.

Simple measures can help all patients: 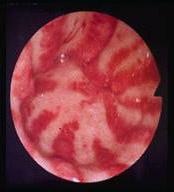 This is a photograph of watermelon
stomach taken during an endoscopy
procedure.The arrangement of new
blood vessel growth resembles
the stripes on a watermelon.

This is less common than esophagus complaints. The most common complaint is a feeling of getting filled up too easily. While ulcers are uncommon, the stomach may be a source of bleeding from overgrowth of fragile blood vessels called “watermelon” stomach.

The simplest solution for stomach involvement is to eat multiple small meals a day and to consider nutritional supplements, for example, Ensure®.

When the small bowel is involved, patients experience uncomfortable bloating after a meal and sometimes develop diarrhea.

Because of loss of normal muscle contraction, intestinal contents may puddle, permitting bacteria to grow in a portion of the intestine that is normally sterile. Many patients respond to broad spectrum antibiotics when their diarrhea is active. The mechanical circumstances cannot be treated, thus repeated courses of antibiotics are frequently necessary.

Small bowel involvement may lead to secondary effects of lactose intolerance (diarrhea and or bloating from dairy products). The normal function of the small bowel is to absorb nutrients into the body so weight loss is another important complication.

Weakening of the muscles of the large bowel usually produces the problem of constipation. This is best dealt with by following a high fiber diet or with supplements that cause a looser, bulkier stool.

How is Gastrointestinal Involvement Assessed?

Not all patients need testing and few patients need all of the available testing. Gastroenterology specialists can examine the esophagus and stomach with slender flexible telescopes called endoscopes. There are tests that measure the strength of muscle contraction (esophageal manometry, gastric emptying studies). X-ray studies can be done usually employing special contrast materials that are swallowed or given like an enema.

The techniques for assessing the diverse problems are very sophisticated although their utility is decided on a case-by-basis.