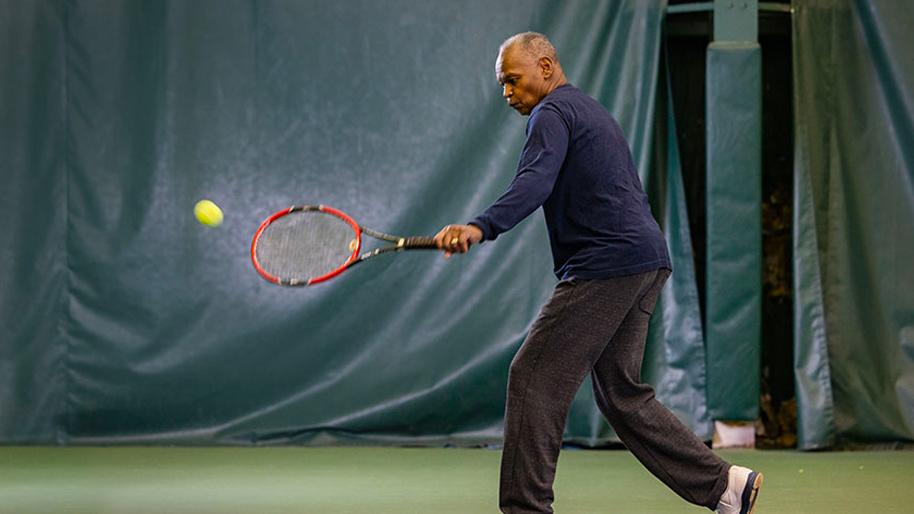 David Sloan, Jr. is back playing his beloved sport, tennis, after discovering he was dealing with undiagnosed myositis that led to the scarring of his lungs and a double lung transplant.  Read his story here.

Myositis is an autoimmune muscle disease, where the immune system attacks its own tissue, causing inflammation in the muscles. This weakens the muscles over time and can cause pain. This chronic condition typically impacts the neck, shoulders, hips and back. The cause and the cure are elusive, but Michigan Medicine is making advances on the research front.

Patients often first notice the weakening by tripping or falling. Others experience trouble climbing stairs, getting up from a seat or reaching for objects overhead. Some also have unusual rashes, breathing problems or difficulty swallowing (dysaphgia).

There are five forms of myositis. They are:

Our Michigan Medicine Myositis Program is the only such program in the Midwest dedicated to the inflammatory myopathies. While considered rare, with about 75,000 U.S. residents living with myositis, the growing number of referrals to our physicians suggests a need for this dedicated group.

A multidisciplinary team of rheumatologists, neurologists, pulmonologists, pathologists, radiologists, nurses, physical therapists, registered dieticians and social workers collaborate on each case to provide patients with the most comprehensive care available.

While a medical history and physical exam are paramount, our team may order the following tests to diagnosis myositis:

Our patients will receive the latest treatments and clinical trials to manage the disease and encourage it into remission. Currently, there are no FDA-approved therapies for any form of myositis.

Clinicians are working to unlock the mysteries behind the cause, the best treatment and the cure for myositis. Rheumatologist  Elena Schiopu, M.D., who founded the Myositis Program, is collecting data on pain to better understand its patterns. As a clinician, she found pain prevents patients from exercising, which is one of the most effective treatments.

She plans on developing an exercise program, formally establishing guidelines to help with the condition. Part of the program will address motivation, as patients need to understand the importance of activity.

She and her team also are trying to understand the biological basis for myositis. They are examining different antibodies and how their presence is indicative of certain types of myositis developing. By taking it to a cellular level, she hopes to understand the immune system’s response to treatment.

Since so many symptoms involve the skin, whether rashes, swelling or bumps, the team is assessing the role the environment – air, water, food – has on myositis.

The Myositis Association (TMA) keeps a list of clinical trials for myositis and non-drug myositis studies taking place across the country.