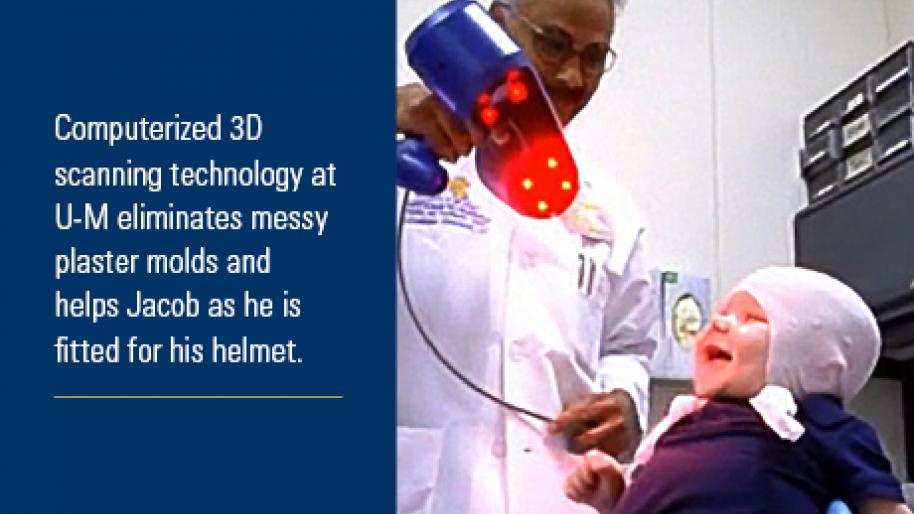 A misshapen or flattened head is referred to as plagiocephaly. If your baby has been diagnosed with plagiocephaly that requires medical intervention to resolve, the Orthotics & Prosthetics Center at the University of Michigan can help. We are among the few University based facilities in the country that offer comprehensive orthotic and prosthetic services for children and adults. Our center is accredited by the American Board for Certification in Orthotics, Prosthetics & Pedorthics, Inc.

Plagiocephaly can occur in the womb due to crowding, or as an infant from too much time spent in the same position, such as lying on their back. It is rarely caused by brain malformation or unilateral sutural synostosis. An increase in positional head deformities has been reported since supine sleeping (sleeping on one’s back) was recommended to reduce the likelihood of Sudden Infant Death Syndrome (SIDS).  When an infant’s rapidly growing head is maintained in a nearly fixed position against the uterine wall or the mattress, the skull is progressively flattened. Such deformational plagiocephaly generally will improve within a few months after birth, especially if a full range of neck movement can rapidly be achieved.  If the plagiocephaly doesn’t improve a cranial molding helmet will most likely be recommended.

The goal of helmet therapy is to provide a safe environment for your baby’s head to grow into a more normal shape. The helmet does not pressure the head, but instead facilitates proper growth.

There is only a small window of opportunity to correct the infant’s skull. As the rate of skull growth is faster in the early ages, helmet therapy is most effective between the ages of 3 to 7 months.  However, helmets are still effective until the infant is 12 months old.

Your Orthotist will spend a great deal of time taking a medical history and will ask you a series of questions about your child’s condition. We will then take cranial measurements to determine the asymmetry. An impression of the head shape is obtained by computerized 3D scanning technology to quickly and efficiently design the helmet from the scan of your baby’s head.

The average treatment will last 3-6 months depending on the age of infant and severity of the condition. Early diagnosis of deformational plagiocephaly will contribute to maximum correction. The helmet is worn 23 hours per day for successful remodeling of the head. Careful and frequent monitoring by your orthotist and physician is required.