CCF can develop either because of trauma or spontaneous causes. Traumatic CCF may occur after head injuries in which the intracavernous carotid artery is torn. Head injuries can range from minor falls to severe penetrating wounds. Traumatic CCF may also result from endovascular therapy. Spontaneous CCF usually results from a ruptured cavernous carotid aneurysm; however these fistulas may be congenital arteriovenous connections that open spontaneously in the setting of collagen vascular disease, atherosclerotic disease, hypertension, or childbirth.

Direct CCF often occurs days or weeks after a closed head injury. Patients present with the classic triad of chemosis (red eye syndrome), pulsatile exophthalmos (abnormal protrusion of the eyeball), and ocular bruit (blood flow sounds coming from the eye). Proptosis, diplopia, and visual loss may result with these fistulas.

Indirect CCF usually has a gradual onset, with generally milder presentation. They often do not demonstrate the classic triad of symptoms. Patients with these fistulas usually have chronically red eyes as a result of tortuous arterialization of the conjunctiva. An ocular bruit is often not heard.

CCF’s can be either treated by microvascular neurosurgical or endovascular techniques. The preferred technique is from an endovascular approach due to the lower morbidity and mortality. However, not all CCFs are amenable to both forms of treatment.

Direct CCFs have been traditionally treated by occluding the fistula with transarterially deployed detachable balloons, with preservation of the internal carotid artery. Since detachable balloons are currently unavailable other treatment options have included placement of a covered stent and coiling of the fistula from a transarterial route with stent assistance to preserve the internal carotid artery. If a transarterial route is impossible or ineffective, a transvenous approach using platinum coils may be warranted. This can be achieved either via the femoral route through the inferior petrosal sinus or surgically via the superior ophthalmic vein.

Indirect CCFs can sometimes resolve spontaneously. Manual carotid compression may be attempted in low risk CCFs, because this can cure almost 30% of the fistulas. In patients with retrograde filling of cortical venous system compression is not indicated due to the risk of intracranial hemorrhage. These patients should be treated from either a transarterial or transvenous approach.

CCF’s are treated surgically by a craniotomy and then occluding the internal carotid artery distal and proximal to the fistula with surgical clips. The cavernous sinus is then packed with acrylate glue, fascia, or Surgicel to occlude the venous outflow. A branch of the external carotid artery may also have to be attached to the middle cerebral artery with a vein or artery depending on the blood flow to the brain to prevent a stroke from occurring. 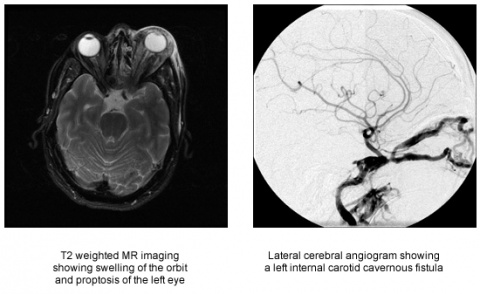 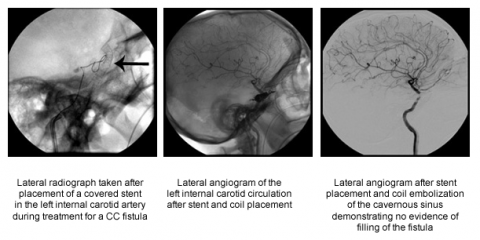