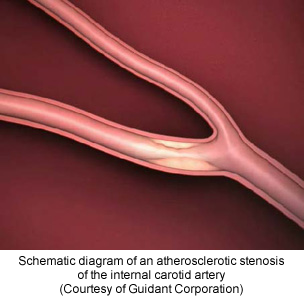 Carotid artery disease occurs when the major arteries in your neck become narrowed or blocked. These arteries, called the carotid arteries, supply your brain with blood. Your carotid arteries extend from your aorta in your chest to the brain inside your skull.

Your arteries are normally smooth and unobstructed on the inside, but as you age, a sticky substance called plaque made up of cholesterol, calcium, and fibrous tissue can build up in the walls of your arteries. As more plaque builds up, your arteries narrow and stiffen. This process is called atherosclerosis, or hardening of the arteries. Eventually, when enough plaque builds up to reduce or disturb blood flow through your carotid arteries, physicians call this problem carotid artery disease. Carotid artery disease is a serious health problem because it can cause a stroke in two ways:

If the artery becomes blocked and the brain does not receive enough blood this can cause a stroke. This is called an ischemic stroke because of the lack of blood flow. This can also cause temporary symptoms that are like a stroke known as a transient ischemic attack (TIA). 700,000 people a year experience a stroke in the United States and about 280,000 patients die from stroke related causes each year.

Certain characteristics can increase your risk of carotid artery disease. Some risk factors cannot be changed while others can be modified or treated.

Risk factors that cannot be changed:

Risk factors that can be modified or treated:

People with carotid artery disease may experience a TIA or stroke, however many people do not have any symptoms. A stroke or a “brain attack” is an injury to the brain caused by a lack of oxygen. Common signs and symptoms of a stroke or TIA may include sudden:

The patient may also experience sudden loss of consciousness and seizures.

If you or anyone you know experiences these symptoms, emergency medical care should be sought. It is imperative for the patient to reach the hospital as quickly as possible for certain types of treatments to be successful. 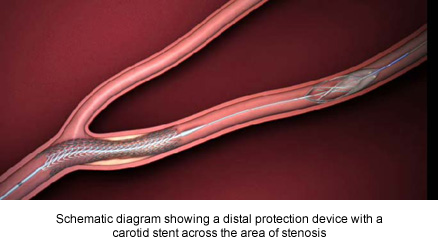 Carotid stenting is an endovascular procedure for carotid artery disease which is done through or inside the blood vessels. A small puncture is made in the femoral artery in your groin area under local anesthesia. A guiding catheter is advanced under x-ray guidance into the internal carotid artery. A small caliber wire is then negotiated under x-ray guidance past the area of narrowing. A stent is then positioned across the narrowed area in the artery within the brain. The stent is released and then dilated with an angioplasty balloon. The stent stays in place permanently holding the artery open and improving blood flow. The stent also holds the plaque against the artery wall. This reduces the risk of plaque breaking off, traveling to your brain, and causing a stroke. Most stents are made from nickel-titanium, a metal that is bendable but springs back into its original shape after being bent. A vascular closure device may be used to close the small incision in your groin or pressure applied to the puncture site until bleeding stops. 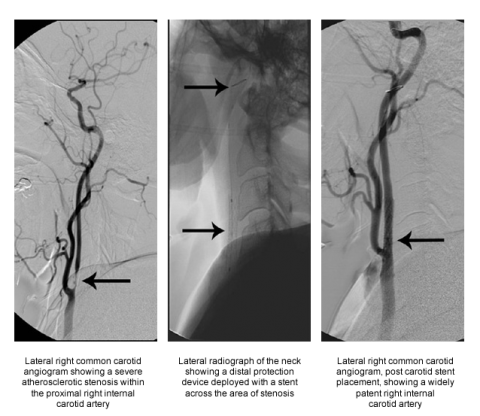 Your doctor may prescribe antiplatelet or anticoagulant medications. Common drugs used include aspirin, Plavix, warfarin, Aggrenox, or Ticlid. These drugs lower the risk of clot formation. Your doctor may also prescribe medications to lower your blood pressure or cholesterol. He or she may recommend ways to control your risk factors, such as quitting smoking, exercising, and losing weight.

Carotid endarterectomy (CEA) is a surgical procedure that removes the blockage in the carotid artery. An incision is made in the neck and into the carotid artery under general or local anesthesia, the plaque is removed from the artery, and then the artery is closed with stitches. CEA is one of the most common surgical procedures in the United States and has been performed for over 50 years.