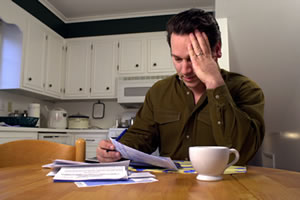 ANN ARBOR, Mich. - With the widespread adoption of PSA screening to detect prostate cancer, the disease is more often diagnosed in American men at an early stage, before it has spread beyond the prostate. But low-income men still are not benefiting from that trend.

A new study finds that men with low income were more likely to go undiagnosed until their cancers had reached more advanced stages. The study, which was led by a researcher at the University of Michigan Comprehensive Cancer Center, appears online ahead of publication in the February 2009 issue of The Journal of Urology.
Examining the records of 570 disadvantaged men from the California IMPACT (Improving Access, Counseling and Treatment for Californians with Prostate Cancer) program designed to provide high-quality care for prostate cancer patients, the authors from the University of Michigan, University of California, Los Angeles, and the Veterans Administration, Greater Los Angeles Healthcare System, found that 19 percent of these men had metastatic cancer at diagnosis, compared to approximately 4 percent of men from the general population tracked in other studies.
Further, the IMPACT patients did not see an increase in the rate of low-risk, less advanced cancers, despite a significant rise in these diagnoses over the same time period in the more affluent population.
The proportion of men in the low-income program diagnosed with metastatic cancer did not change over time, indicating that low-income men were not receiving prostate cancer screening services that have been shown to reduce the diagnosis of late-stage cancers in the general population.
Writing in the article, lead author David C. Miller, assistant professor of urology at the U-M Medical School states, "Our principal findings clarify some of the challenges (and opportunities) faced by public assistance programs designed to reduce cancer-related disparities. Without question, IMPACT enables eligible men to receive previously unattainable-and high quality-prostate cancer care."
But, the authors note, the continued higher rate of metastatic and higher risk localized cancers suggests that more comprehensive strategies are needed to eradicate socioeconomic disparities in prostate cancer.
"While much attention now focuses on potential overdiagnosis and overtreatment of men with screen-detected prostate cancer, our findings serve as a reminder that for disadvantaged men, underdetection and undertreatment of prostate cancer remain significant concerns," the authors write.
In an accompanying editorial, M. Norman Oliver of the University of Virginia School of Medicine comments that men from minority groups who live in poverty and are diagnosed with prostate cancer are more likely to die of their disease than those men with a higher socioeconomic status.
He writes, "We must address more than socioeconomic disparities in prostate cancer care. … African-Americans have a disproportionately high rate of poverty with some 25 percent living below the federal poverty level compared to 8 percent of the white population in that category. This racial disparity in combination with the socioeconomic disparity already discussed places African-American men diagnosed with prostate cancer at an even greater risk of presenting with incurable disease."
Reference: The article is "Prostate Cancer Severity Among Low Income, Uninsured Men" by David C. Miller, Mark S. Litwin, Jonathan Bergman, Sevan Stepanian, Sarah E. Connor, Lorna Kwan and William J. Aronson. The editorial is "Access to Prostate Cancer Care and Implications for Survival Among Minorities" by M. Norman Oliver. Both will appear in The Journal of Urology, Volume 181, Issue 2 (February 2009) published by Elsevier.
Prostate cancer statistics: 186,320 Americans will be diagnosed with prostate cancer this year and 28,660 will die from the disease, according to the American Cancer Society
Resources:
U-M Cancer AnswerLine, 800-865-1125
U-M Comprehensive Cancer Center