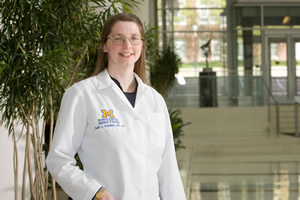 ANN ARBOR, Mich - Researchers are conducting studies on an experimental medication to block nerve damage and inflammation in the brain that can lead to progressive memory loss and behavioral changes in people with Alzheimer's disease.

Current Alzheimer's disease therapies focus on improving symptoms versus attacking the root of the disease progression; 400 volunteers with mild to moderate Alzheimer's disease are needed to further test this new approach. The University of Michigan Health System is one of the study sites.

The buildup of plaques can trigger inflammation in the brains of people with Alzheimer's disease. A protein called amyloid beta builds up in plaque deposits and may promote damage to nerve cells.  Researchers will test an experimental drug that seeks to stop amyloid beta from binding to a receptor in the brain called RAGE (receptor for advanced glycation endproducts). Douglas Galasko, M.D., professor of neurology at UCSD, is directing the study.
"The evidence from basic research studies is compelling and merits further evaluation in a rigorous human clinical trial," Galasko said. "While most current Alzheimer's disease therapies focus on the various symptoms of cognitive impairment, this trial is testing whether we can modify actual progression of the disease itself by targeting the interaction between amyloid beta and an important receptor in the brain."
The industry-sponsored study is being conducted by the Alzheimer's Disease Cooperative Study, a consortium of leading researchers supported by the National Institute on Aging, part of National Institutes of Health. The ADCS at the University of California, San Diego, will coordinate the 18-month, double-blind, placebo-controlled clinical trial. The drug, which has been tested in animals and in preliminary human studies, is being studied in this Phase II clinical trial to determine if it will slow the progressive decline associated with Alzheimer's disease.
The study will recruit the 400 volunteers aged 50 and up at 40 sites nationwide, including the University of Michigan Health System. The ADCS consortium is a public resource, supported by the NIA, to facilitate the study of potential new therapies for Alzheimer's disease. Its nationwide outreach is critical to the recruitment of participants into such studies.
"Progress in treating and preventing Alzheimer's would just not be possible without the dedication of the patients and families who volunteer for clinical trials," said Neil Buckholtz, Ph.D., chief of the NIA Dementias of Aging Branch.
Physicians and nurses will monitor the participants during regular visits and measure the severity and progression of disease using standard tests of functional and cognitive abilities. To ensure unbiased results, neither the researchers conducting the trial nor the participants will know who is receiving the study drug and who is getting the placebo.
"In addition to monitoring disease progression through cognitive tests, we will examine various biological markers of the disease," said  Judy Heidebrink, M.D., M.S., local principal investigator at the University of Michigan Health System. "These include the degree of atrophy (or shrinkage) of the brain as measured by magnetic resonance imaging, the extent of amyloid buildup in the brain assessed by Positron Emission Topography imaging, and levels of amyloid beta and other proteins in blood and spinal fluid."
Much of the preclinical, basic research connecting RAGE to amyloid beta that led to the current study was performed by scientists at Columbia University, the University of Perugia in Italy and the University of Magdeburg in Germany.
To learn how to participate in the study, contact NIA's Alzheimer's Disease Education and ReferralCenter at 800-438-4380 or adear@nia.nih.gov or Joanne Lord at the University of Michigan Health System, 734-647-7760 or jllord@umich.edu.
Written by the Alzheimer's Disease Cooperative Study