Beyond the Hill: How U-M medical care and education spread across Michigan

For 100 years after the dawn of medical care at the University of Michigan, patients who wanted to have their ailments treated by the university’s illustrious physicians had to come to downtown Ann Arbor. 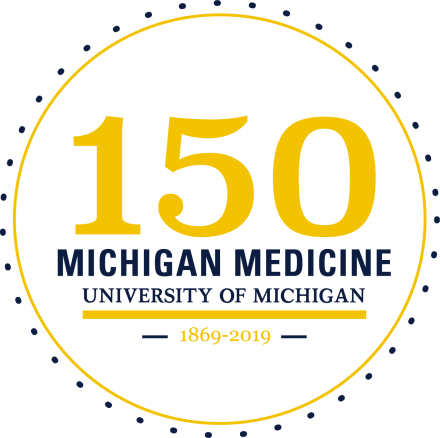 And come they did, first to the surgical amphitheaters of the Medical School starting in 1850, then to the first hospital on North University Ave. in beginning in 1869, then to the Catherine Street hospitals that opened in 1891, and the massive Old Main hospital beginning in 1925.

But by the mid-20th century, Michiganders seeking U-M-level care didn’t necessarily have to come to “the hill”, as the main medical campus came to be known.

Instead, the talented men and women of U-M’s health care community began coming to them, to serve an ever-rising demand for care and expertise.

The roots of our outreach

Learn more about
our history

The first effort to bring U-M medical expertise to the rest of the state came in the form of postgraduate education for physicians already in practice. In 1929, U-M physicians traveled to Detroit to teach their colleagues about some of the latest techniques and treatments in internal medicine and surgery.

The number of destinations grew each year, and today what we now call continuing medical education is delivered in person and online to help providers keep their knowledge and skills up to date. 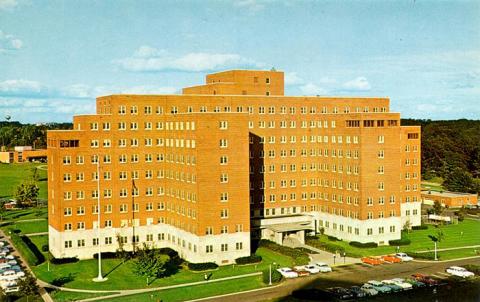 The VA Ann Arbor hospital soon after it opened in 1953, with U-M physicians providing care to veterans.

But it was not until 1953 that U-M care really started to come down from the hill.

That year, as the nation sought to serve the long-term medical needs of those who had fought in World War II and the Korean War, Ann Arbor’s first veteran’s hospital opened on Fuller Road.

Through a partnership that continues to this day, all of the physicians serving veterans at the flagship hospital of the VA Ann Arbor Healthcare System have U-M Medical School faculty appointments as well as being VA staff. And for decades, U-M medical students, nursing students and residents have traveling the short distance down the road for part of their clinical care training.

The era of the health center 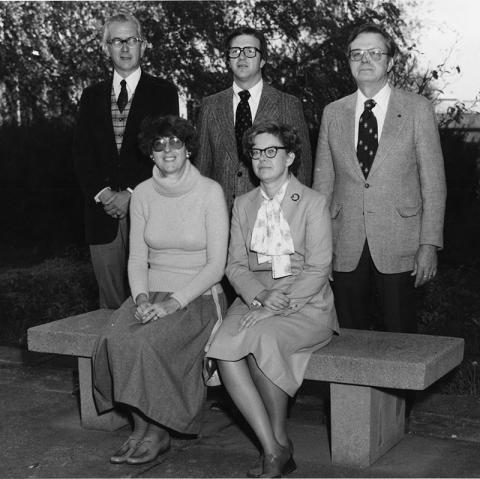 That same year, specialists in dermatology, obstetrics and plastic surgery held occasional clinics in Ypsilanti, and pediatric cardiologists and endocrinologists traveled around the state to hold periodic clinics.

And from then on, as demand for U-M care grew and new advances allowed more and more care to be delivered outside of hospitals, the growth of our ambulatory care network blossomed.

As the population of Livingston County burgeoned, U-M medical leaders sensed an opportunity, and in 1982 opened the first location of the Brighton Health Center on West Grand River Boulevard. It later moved to Challis Road, where it was joined by the massive new Brighton Center for Specialty Care nearby in 2018. The Howell Health Center opened in 1997 for pediatric care.

When the sprawling Domino’s Farms complex opened in northeast Ann Arbor in the mid-1980s, U-M cardiovascular and sports medicine specialists looked at it for the room they needed to provide outpatient and rehabilitation care. Their lease of space in 1986 was just the first, and now a wide range of clinical and research programs look out over the buffalo pastures of the complex.

The drive to serve more patients across U-M’s home county of Washtenaw drove the launch of several new locations, including the Dexter Health Center in 1989, and in 1995 the opening of the Saline Health Center and a new site for the Chelsea Health Center that allowed room for specialty services as well as primary care. The Ypsilanti Health Center also opened in 1996, providing an important location for serving a disadvantaged community and providing new training opportunities. A West Ann Arbor center opened in 1995 was replaced in 2017 by the much larger West Ann Arbor Parkland Plaza.

Even though outpatient facilities on the main medical campus had expanded with the opening of the Taubman Center in 1986, it soon became clear that even more space was needed in Ann Arbor to serve patients.

So in 1995, U-M bought five buildings on the periphery of the Briarwood Mall complex, and acquired more the next year. Today, a wide range of Michigan Medicine care is available at this convenient location just off I-94, from primary care to adult and pediatric rehabilitation. 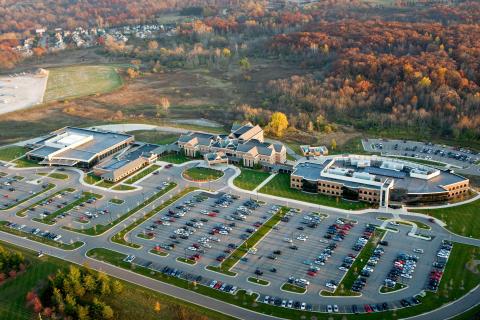 The East Medical Campus, with the the health center that opened in 1996 at center, and the newer ambulatory surgery and mental health buildings at left and right.

Meanwhile, the East Medical Campus began to take shape on Ann Arbor’s eastern border near US-23, with the opening in 1996 of the East Ann Arbor Health Center. It was joined in 2006 by the East Ann Arbor Ambulatory Surgery and Medical Procedures Center and Rachel Upjohn Building, and in 2007 by the Geriatrics Center.

As the 1990s went on, other organizations looked to U-M for partnerships. Hurley Hospital in Flint engaged with our Emergency Medicine team to staff its emergency department starting in 1995, providing a valuable training and clinical research site.

The Ann Arbor Public Schools and Ypsilanti Community Schools teamed with us in the late 1990s to build a school-based health center program that has now grown into today’s 17-site Regional Alliance for Healthy Schools . And multiple hospitals joined the Rogel Cancer Center’s Radiation Oncology Network to ensure that cancer patients statewide receive the most up-to-date radiation therapy.

Another kind of partnership – one that would harness U-M expertise to help hospitals and patients statewide – launched in 1997. It all started when the state’s largest insurer, Blue Cross Blue Shield of Michigan, tapped U-M cardiologists to lead an effort to improve the quality, consistency and value of interventional heart care across the state. Together with partners at hospitals across the state, they launched the Blue Cross Blue Shield Cardiovascular Consortium (BMC2), which has helped thousands patients receive better care no matter where they are.

BMC2 paved the way for the creation of 16 other statewide organizations just like it, each focusing on different types of care, from emergencies to cancer. Known as a Collaborative Quality Initiatives, they’re led by Michigan Medicine physicians and staff who work with physicians, nurses and staff across the state to pool clinical data and learn from it to improve care.

Another effort to improve the quality of care that patients receive statewide, with U-M leading the way, launched in 2013. That year, physician groups statewide started joining a new Accountable Care Organization that also involved all U-M physicians and other providers, known as POM-ACO. Together, they have helped the care of Medicare beneficiaries across Michigan, while saving the Medicare system tens of millions of dollars.

The 2010s: an era of hospital-level partnership 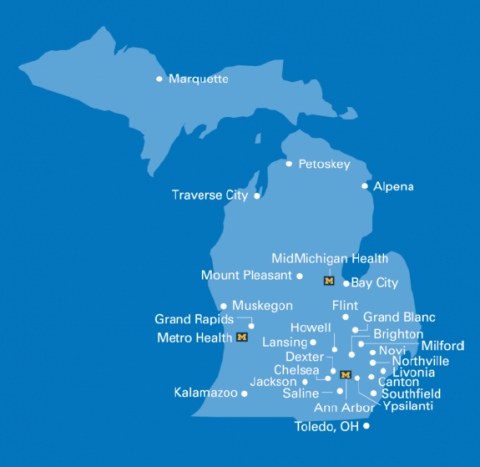 Today, Michigan Medicine's reach extends across both peninsulas, through the health centers and outreach clinics we operate, and the health systems we've affiliated with.

The past decade has brought large-scale affiliations and partnerships between Michigan Medicine and other health systems across the state.

It started with a 2012 master affiliation agreement with the Michigan hospitals of Trinity Health. This started the ball rolling for new initiatives that have allowed U-M teams to begin caring for select hospitalized patients at St. Joseph Mercy Chelsea Hospital and St. Joseph Mercy Ann Arbor – extending our inpatient capacity.

We also partner with Trinity and others on the Washtenaw Health Initiative, which seeks to understand and serve the needs of our community’s most vulnerable residents.

Our affiliation with MidMichigan Health, launched in 2013, was the first time another health system was allowed to use the “block M” as part of its branding. The 11-hospital system, which also operates health centers and other services across the central Lower Peninsula, now offers many services in partnership with U-M teams.

And in 2019, a partnership with Sparrow Health System in Lansing provided a way for patients in the central part of the state to get access to more of the specialty services of our physicians, starting with ones from C.S. Mott Children’s Hospital. Children and pregnant women in the Upper Peninsula also receive advanced care from U-M physicians through regular clinics at the UP Health System in Marquette.

It’s been nearly 100 years since the first efforts to bring U-M expertise and care down from the hill, and extend its reach to patients statewide. Who knows what the next 100 will bring?