U-M Depression Center to be named for Eisenberg family, in recognition of $30M in giving

ANN ARBOR, Mich. – The University of Michigan Board of Regents today approved the renaming of the U-M Depression Center for Frances and Kenneth Eisenberg and their family, in recognition of their transformational $30 million total giving to depression research and scholarship.

The center will be known as the Frances and Kenneth Eisenberg and Family Depression Center. 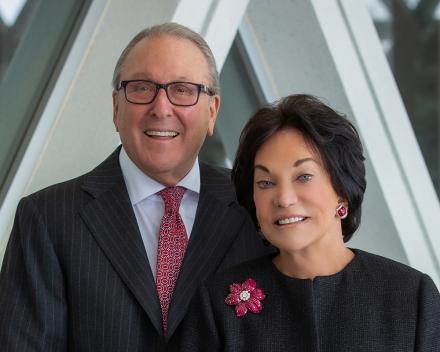 The Eisenbergs’ philanthropy toward the center includes earlier support for advanced science in the field of mood disorders and a professorship now held by the center’s new director, Srijan Sen, M.D., Ph.D.

“Thanks to the Eisenbergs’ extraordinary commitment to moving depression and bipolar illnesses out of the shadows and into the sunlight of advanced scientific research, discovery and evidence-based care, our university will be able to accelerate the pace of prevention, detection, treatment and support,” said U-M President Mark S. Schlissel, M.D., Ph.D. "It's hard for me to imagine a more important and timely investment in medical research than what is being made by the Eisenberg family."

“With the pandemic, we are finally talking about how central mental health is to our everyday lives,” said Kenneth Eisenberg. “There is a growing awareness about how pervasive conditions like depression are across the nation. There’s promise in that awareness. Depression, in all of its forms, has robbed millions of people of joy, purpose, relationships, and even lives.

“Frances and I wanted to provide a gift that would exponentially grow the potential to change millions of people’s lives for the better, as well as provide momentum to the incredible work that the Depression Center is doing in this area,” he added. “It’s a message of hope and promise of better lives for millions.”

The Eisenbergs’ total giving to U-M is $39 million, including gifts to the Taubman Medical Research Institute and other areas of Michigan Medicine, to the Eisenberg Institute for Historical Studies in the College of Literature, Science & the Arts (LSA), and contributions to the School of Education and TeachingWorks, School of Social Work, Department of Athletics and University Musical Society.

In addition to the Frances and Kenneth Eisenberg Professorship in Depression and Neurosciences, their past gift to the Depression Center supports several award programs: a research prize awarded to a world-renowned scientist for groundbreaking research, a research scholar fund to support emerging leaders in the field, and two research funds to support promising projects.

Sen, who is also U-M’s associate vice president for research in health sciences, noted, “The incredible generosity of the Eisenberg family and other donors will catalyze collaboration among scientists and clinicians from different fields, allowing us to harness the modern tools of data science, neuroscience and technology and make even more rapid strides in reducing the burden of these diseases.”

In a written statement, Regent Mark Bernstein said the Depression Center's establishment was "all thanks to the vision and remarkable efforts" of John Greden, the center's founding director and former chair of the Department of Psychiatry.

"Dr. Greden has been the driving force behind the center's broad mission to prevent, detect and treat depression, bipolar and related mood disorders earlier and more effectively, and educate and reduce stigma around depressive illnesses," Bernstein said.

"We are currently living through a period where mental health issues are at the forefront and gifts like that of the Eisenberg family make all the difference in being able to confront the mental health crisis, develop the cures and preventions we need, and ensure that those struggling can receive quality care and can do so without fear of judgment."

Board of Regents Chair Denise Ilitch recalled that when the center was founded, it was considered risky to name it the Depression Center. “I thought it was such great courage on behalf of Michigan, on behalf of Dr. Greden, to call it what it is and to impact the stigma…of depression,” she said during the Regents meeting. “It is such important work… it really makes a difference. Thank you to the Eisenbergs for this important donation that makes an impact at the University. Your money is saving lives.”

Sen noted that unlike most other leading causes of death and disability in the U.S., the negative impact of depression has increased substantially over the past two decades. The pandemic’s impact on the mental health of individuals in many parts of society has further increased the urgency of developing solutions.

“Depression and related disorders affect the health and well-being of so many people, and the outcomes of many other illnesses,” said Marschall Runge, M.D., Ph.D., the executive vice president for medical affairs, dean of the Medical School and CEO of Michigan Medicine, U-M’s academic medical center. “We are confident that the Eisenbergs’ leadership will inspire others who have seen the toll that depression can take to lend their support and move science and clinical care forward even faster.”

“Research funds from donors are critical for providing the spark for discovery science -- early-stage findings that can form the basis for winning federal funding and fueling large-scale efforts to advance knowledge and improve care,” he said. “Our center was the first of its kind, and by further growing gifts like this, we will continue to lead the nation and develop the cures and preventions we seek.”

For instance, Sen’s own work on the integrative effects of stress, sleep disruption, genetics and other factors on the mental health of health care professionals has been supported in part by his professorship funds. His work has direct relevance to those who have cared for COVID-19 patients.

The Eisenbergs’ giving will open doors to many further projects, programs and support for U-M research teams in a wide range of fields, said Sen. The Eisenberg Family Depression Center includes more than 350 faculty members from 17 U-M schools, colleges and institutes whose work relates to all aspects of depression and bipolar disorder. Together, they bring in more than $58 million in research funding each year.

The Eisenberg family joins significant donors such as the Upjohn family, the Prechter family, Judith Tam and others in helping to make the U-M center a national example. Other universities have patterned their own depression centers on U-M’s, and have formed a National Network of Depression Centers, based in Ann Arbor.

About the Eisenberg family

For 50 years, Kenneth Eisenberg was chairman and CEO of Kenwal Steel, the family business he took over in the 1960s. Under his leadership, the company has become a full-service steel processing company with locations in the U.S. and Canada. The Eisenbergs’ son Stephen joined the company in the 1990s, and was named chairman and CEO in November 2020.

Kenneth and Frances Eisenberg earned bachelor's degrees from the University of Michigan in 1964, Kenneth from LSA, and Frances from the School of Education. Frances also completed her teaching certification at U-M. As active volunteers throughout the university, both served on the steering committee of U-M’s most recent campaign.

Kenneth Eisenberg serves on the Michigan Medicine Advisory Group, the LSA Dean's Advisory Council and the Taubman Medical Research Institute Advisory Board; Frances serves on the School of Education's National Advisory Board. The Eisenbergs’ two sons, Stephen and Brian, and their families give generously of their time and resources to a range of U-M concerns. Stephen earned a bachelor's degree from LSA in 1989, and with his wife, Nicole, serves on U-M’s Greater Detroit Campaign Leadership Council and the C.S. Mott Children's Hospital and Von Voigtlander Women's Hospital Advisory Council.

About the Depression Center

U-M established the Depression Center in November 2001, at a time when people with depression and bipolar disorder faced a heavy stigma, and research on these conditions lagged behind progress in other areas of medicine such as cancer.

A recent Depression Center Impact Report gives an overview of the wide range of efforts based at the center, including those aimed at understanding and supporting the needs of adolescents, athletes, military veterans, physicians, psychologists, nurses, social workers, schools, workplaces, and faith leaders. The center’s Depression on College Campuses conference has convened national leaders on that topic since 2003.

The U-M Depression Center was the founding member of the National Network of Depression Centers, which works to connect depression centers across the country and foster scientific discovery and evidence-based care. The 26-member network is patterned after the nation’s network of comprehensive cancer centers.

Many of the center’s donors have been driven to give after seeing a loved one struggle with depression or bipolar disorder, or losing someone to suicide. For instance, the Prechter family established the Heinz C. Prechter Bipolar Research Program after Heinz’s death.

In recent years, the center has harnessed the power of massive amounts of clinical, genetic, long-term follow up and wearable device data to understand depression vulnerabilities and treatment responses. This includes a Mental Health Biobank, which asks Michigan Medicine Department of Psychiatry patients for permission to store and analyze their DNA and data anonymously, and data collected by the U-M Precision Health and the Michigan Institute for Data Science.

A note about the naming: Michigan Medicine recognizes the generosity of our donors in many ways, in keeping with the university’s guidelines. Two prominent examples are the Eisenberg Family Depression Center, which is a campus-wide center with no single physical location and members from many schools and colleges, and the Rachel Upjohn Building, which houses outpatient care, research and events for a broad range of mental health disciplines based in the Department of Psychiatry. From professorships to lectures, and research programs to hospital units, namings may honor those who have given to support our work, or whose legacy or work has inspired others to give. For all of these gifts, we express our heartfelt appreciation.