Stopping Contagion With Science at U-M: A Look Back

Even before scientists understood what caused them, or developed drugs or vaccines for them, U-M offered advanced care for infectious diseases

Right now in hospitals around the world, health care professionals taking care of patients with COVID-19 are going to great lengths to protect themselves and other patients from the coronavirus that causes the disease. 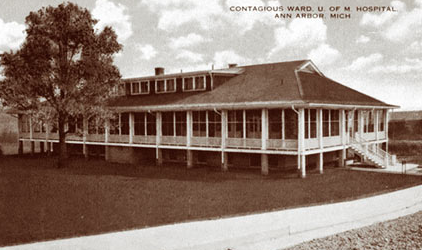 They might not realize it, but some of the techniques they’re using date back more than 100 years, when hospitals adopted the “aseptic technique” for inpatient care.

The idea that infections didn’t spread via some mysterious process in the air, but rather through contact with something that a sick person had touched, was still a novel one in the late 19th and early 20th centuries.

In fact, it was still called the “germ theory” of disease – because medical science hadn’t yet discovered the true causes of most infectious diseases and their complications, and medical professionals hadn’t yet understood their own role in transmitting disease.

Even though bacteria were being studied in research laboratories at the University of Michigan and elsewhere by the late 1800s, viruses were still years away from being seen and understood by anyone.

Not to mention the fact that antibiotics, antiviral medications and modern vaccines were decades away from being developed by university scientists and drug companies.

But the growing realization that touch could transfer disease helped drive new developments in hospitals for people with contagious illnesses in the early 20th century. It ushered in special processes that health care workers and trainees had to follow, and research showing that these steps could reduce disease.

Those changes are still considered “best practice” today: thorough hand-washing by clinicians as they moved between patients; covering the clothes of patient-care staff with a new gown every time they entered contagious patients’ rooms and taking it off when they left; and sterilizing or disposing of everything a contagious patient touches.

In August 1914, the University of Michigan opened its first facility designed specifically for this kind of care: a 24-bed Contagious Hospital, on the site where a main Medical School building now stands.

It had an ingenious design, created entirely for infection prevention. Each room held two patients, and had two doors: one that opened into a central hallway, for doctors, nurses, cleaning staff and medical trainees to pass through, and one that opened onto a porch that wrapped around the entire building.

The porch door allowed the patient’s bed to be wheeled through without passing other patients when they entered or left the hospital. It also allowed them to be taken out on the porch for some fresh air, which was considered to have healing properties. And large windows allowed medical students to stand on the porch as their professors discussed the care inside. 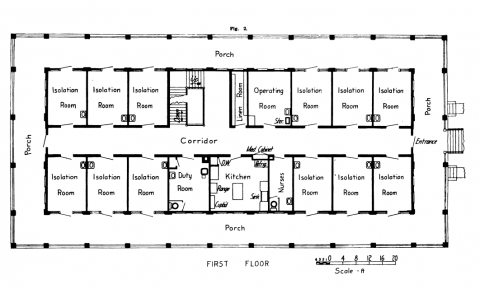 The floor plan of the patient care floor of the 1914 Contagious Hospital at U-M. Click the image to see it larger.

It started in a shack

U-M had actually opened its first contagious disease facility in 1897, in a shack that had served as the former hospital laundry. It stood a short distance away from the main Catherine Street hospitals.

But after smallpox ravaged the city of Ann Arbor in 1908, and patients overflowed into a hastily retrofitted house, the city offered money to build a new facility if the university would provide the land and staff.

It wasn’t big – 40 feet by 100 feet. But the Contagious Hospital’s three stories even had living quarters upstairs for nurses, complete with a dining room and living room. The lower level included a large area for sterilization equipment, as well as a morgue.

The design, and the techniques the nurses, doctors, maids, janitors and medical students were trained to use, were inspired by trips to other hospitals that U-M medical leaders David Cowie, M.D. and Reuben Peterson, M.D., and a lead nurse had taken.

They especially focused on care at the city hospital in Providence, Rhode Island, which had been patterned on similar hospitals in London and Paris. There, patients with different diseases were cared for in separate buildings. But U-M and Ann Arbor couldn’t afford that.

Peterson described the hospital in the Journal of the Michigan State Medical Society a few months before the building opened. He described how the aseptic technique itself could make it possible for patients with different diseases to be cared for in the same facility. 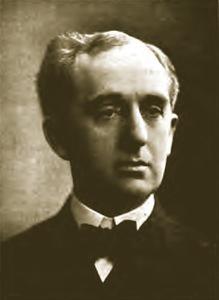 And as Cowie wrote in 1916 in the Transactions of the Clinical Society of the University of Michigan, the aseptic technique “supports the idea that the very great majority of contagious and infectious diseases are communicated from one individual to another, or from one place to another, by means of direct or indirect contact. In other words, the infected person has come either in direct contact with the patient or with something that has, directly or indirectly, touched him,” Cowie wrote. “If this idea can be proved to be correct or adequate, at once a great economic factor has been introduced into contagious hospital work.”

One nurse could take care of multiple patients, so long as she (and in those days, they were all women) washed thoroughly and changed gowns in between.

In essence, the new hospital, and others like it, used the same approach for inpatient care that surgical teams had recently started using in their operating rooms.

Previously, surgical infection prevention had focused on fumigating the air in the room with chemicals before an operation, which Peterson recalled doing as a medical student. But as evidence grew of the role of touch, hospitals switched to making sure that everything that came in contact with the patient’s open surgical site was sterile going in, and disposed of or sterilized afterward.

At U-M and other sites, that same new concept came to inpatient care. Besides handwashing and gowning, the dishes that patients used at the new hospital were sterilized before and after use, as were clothes and bedding. Staff walked on cocoa-fiber mats saturated with mercuric chloride as they left, to keep from bringing infection out on their shoes. Staff couldn’t eat on the clinical levels of the building. Cases of cross-infection among the patients were carefully traced.

Even while the new hospital was under construction, the team used the technique in the Palmer Ward for children, and showed that a case of chicken pox could be contained to the original patient without sickening other children.

Before, there had regularly been outbreaks of disease in both the adult and pediatric hospitals that required quarantining of entire areas after one patient’s infection spread to others. In 1911 alone, the Palmer Ward had been cordoned off for five months for a quarantine, and all but the most urgent surgical area had been stopped for a month.

In the first 11 months after the Contagious Hospital opened, its teams cared for 223 patients, most of them with chicken pox, mumps, scarlet fever, diphtheria and acute tonsillitis.

Only one trainee caught scarlet fever, but no others -- including the maids and janitor -- got sick.

And no quarantines were necessary in the main hospitals after the aseptic technique began being used there.

When the deadly influenza of 1918 hit Ann Arbor on September 23, after a soldier who had traveled from epidemic-stricken Massachusetts was admitted to the hospital, the aseptic tactics were well in use.

The U-M hospital admitted 130 other influenza patients in less than two months, even though half the doctors at the Medical School had been called up to military duty in World War I at the time. Only 13 of those hospitalized died. A report to the U-M Board of Regents in 1919 also noted that only five U-M students had died of the flu despite being in the highest-risk age group.

Even as the influenza pandemic raged, Dr. Cowie was fitting in research along with caring for patients. He studied what the infection was doing to patients’ adrenal glands, and tried injections of epinephrine and dead typhus bacteria on those with influenza-related pneumonia.

Though neither approach had a great effect, the research-based approach continued. 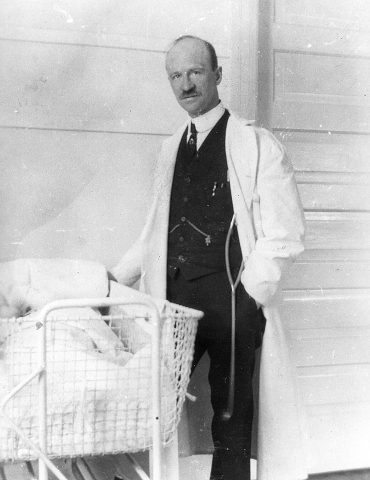 As Cowie wrote in a 1942 history of the Department of Pediatrics and Communicable Diseases, “Immunizations of all kinds are made in this division of the clinic, not only for the patients but for the entire personnel of the University Hospital. These immunizations consist of vaccinations against smallpox, typhoid fever, diphtheria, and whooping cough, the giving of antitoxins, of immune serums, and of immune blood transfusions, and the carrying out of desensitizations of various kinds for those who are allergic. The Contagious Hospital laboratories employ a fulltime chemist and a full-time bacteriologist.”

The Contagious Hospital continued to serve patients until 1956, around the time when the Division of Infectious Disease was formally created in the Department of Internal Medicine and intensive care units were proliferating in major hospitals.

Research on the prevention of cross-contamination of patients, and the protection of health care workers from occupational infectious hazards, has come a long way – including a large body of work by U-M and VA Ann Arbor researchers. But the legacy of that first evidence-based facility lives on in some of the precautions taken today.