Three in One: How Academic Medical Centers Came to Be

Today, we take them for granted. Huge university medical centers, filled with patients who travel miles to receive care that’s available nowhere else, from teams of highly specialized clinicians. 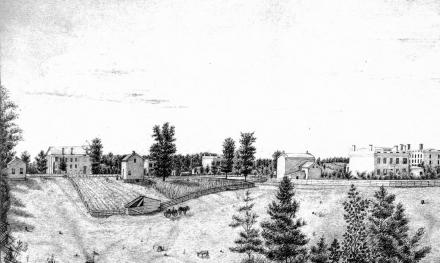 An 1855 sketch of the University of Michigan campus by Adeline B. Mead, showing the Medical School building at left and the professor's house that later became the first university-owned hospital in the U.S. at right.

Nearby, research laboratories yield new discoveries about the human body and everything that can go wrong with it -- or heal it.

Classrooms hum with the questions and answers of students training for a health or science profession.

These three-in-one institutions are citadels of curiosity and the cutting edge. But where did the idea for the academic medical center come from?

It all started in the mid-1800s. The University of Michigan had welcomed its first students in 1841, on a 40-acre piece of farmland in the heart of the tiny city of Ann Arbor.

The university’s charter, approved in 1817, envisioned it as a training ground for many disciplines -- including medicine. But it wasn’t until 1848 that the first medical professors came on board, in what was dubbed the Medical Department.

From the beginning, these physicians were full members of the faculty, unlike at other institutions in the East that had started medical schools in the 1700s and early 1800s.

By 1850, they opened a grand columned building on the field now known as the “Diag”, where they could teach future physicians. 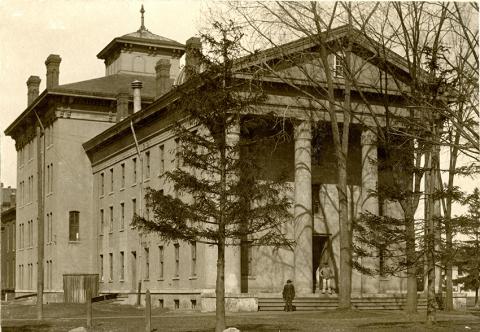 Through lectures, anatomy lessons on cadavers and watching their professors operate on living patients, the students learned medicine in just two years.

They learned scientific methods in the nation’s first dedicated chemistry laboratory building. But their only direct experience with patients came when they shadowed practicing physicians during the summer.

The medical professors knew the students needed to learn clinical skills in order to practice medicine properly. Some even lobbied the university’s leaders to move the medical program to Detroit so they’d have a larger pool of patients to draw from.

But the school stayed put, and the ranks of medical students swelled to more than 500 just after the Civil War. The medical faculty advocated loudly for the creation of a hospital to house the hundreds of patients needed each year for their educational demonstrations.

No university had ever created its own hospital before. But by the spring of 1869, with help from a special state funding package, the medical faculty received permission to convert one of the houses originally built for professors into a 20-bed hospital. 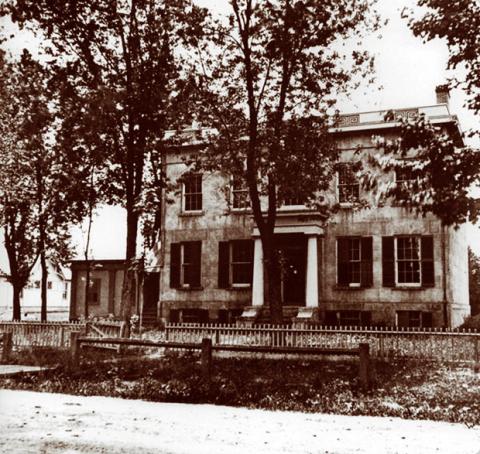 This house, originally built as living quarters for some of the first U-M professors, was converted in 1869 into a 20-bed hospital - the first university-owned hospital in the United States.

The tight tie between the university and patient care was made clear in the first report to the Board of Regents. “The general management of the hospital shall be under the control of the medical faculty, and the management of patients shall be under the control of the hospital staff,” it said. The first staff member, called a janitor of the hospital, was hired, and granted living quarters for his family in the basement and two rooms of the first floor. He was paid 75 cents a week for every patient admitted to the wards, and had to cook and clean for patients, and keep the fires lit.

By January 1870, the vision for a clinical care facility to serve the academic mission was coming true.

An update to the Regents noted that “the organization of a Hospital in connection with the University, although at first deemed an experiment of doubtful success, thus far promises well as a means of valuable clinical teaching, with little expenditure for current expenses beyond that provided for through fees from patients.”

Meanwhile, in Philadelphia, a similar experiment was getting under way. The University of Pennsylvania had opened its medical school in 1765, the first in what were then British colonies. But it took the school more than a century to create its first university-owned hospital. Unlike U-M’s, it was built for the purpose, and opened in 1873.

As more medical schools and hospitals sprouted throughout the nation, the experiment begun in Ann Arbor continued to bear fruit. So many patients began flocking to U-M’s campus for care that two new wings had to be added to the original hospital in the mid-1870s, this time with funding not just from the state but from the people of Ann Arbor as well. 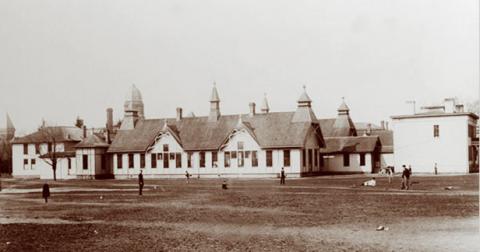 The first university-owned hospital in the nation started in the converted house at the right of this image, and was enlarged a few years later to include the wooden "pavilions" seent at left.

The pavilions, as they were called, were built of wood to make them easy to burn if they became too contaminated by infections. The Medical School actually led the way on research into the nature of infection, and the microscopic organisms that killed so many people in those days of poor sanitation, few vaccines and no antibiotics.

A Hygienic Laboratory, built in 1887, made it possible for the university’s research-minded faculty to apply their scientific knowledge to investigating, stopping and preventing outbreaks. More labs followed, to advance the discovery of new medicines and new knowledge about the body.

This kind of investment in research facilities, and the pursuit of new knowledge in the public interest, formed the third part of the academic medical center model.

The Catherine Street hospital complex, whose first buildings opened in 1891, served as the hub of clinical care for decades.

By the 1890s, the clinical portion of the university had moved a few blocks north, to Catherine Street, where brick hospitals and a cluster of other buildings served an ever-growing number of patients who traveled from all over the state for care. Health professions education grew to include dentists, pharmacists, public health professionals and nurses. Meanwhile, medical education and research continued to grow on the Diag.

The Roaring 1920s brought research, education and clinical care at Michigan closer together, with the opening of the state-of-the-art University Hospital on the corner of Observatory and Ann streets, and a dedicated clinical research building called the Simpson Memorial Institute next door. 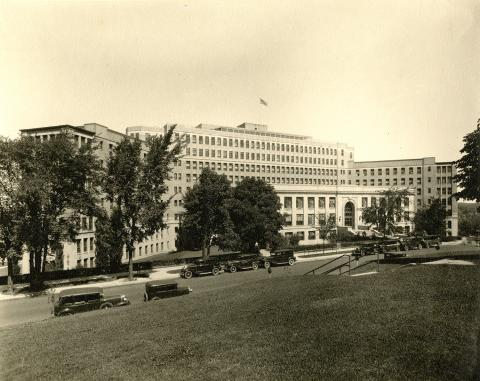 The University Hospital opened in 1925, and served as the main hospital for 61 years. It came to be known as "Old Main."

The modern era of science-based medicine had truly begun – and with it, the era of federal funding for medical research, which exploded starting just before World War II.

As academic medical centers like U-M’s harnessed the new federal funds to fuel discovery, new ideas and technologies began reaching their patients first. New training programs sprang up, to equip physicians to offer specialized care made possible by these innovations, and send them out to start their careers.

By the time the current University Hospital opened in 1986, the academic medical center model had spread nationwide, with all but a few states having a three-in-one institution of medical education, research and care. 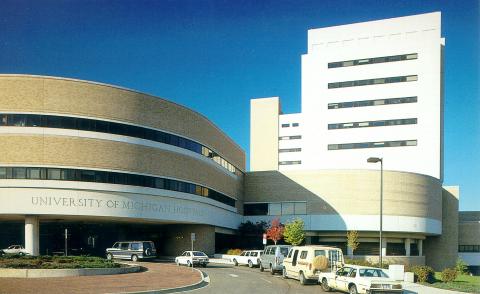 The "replacement hospital" opened in 1986, as it appeared on a postcard at the time. The University Hospital and Taubman Center complex still serves as the hub of adult inpatient and outpatient care at U-M, but many other buildings have opened on the main medical campus and in surrounding communities to handle the ever-rising demand for patient care.

Today, there are 154 accredited medical schools in the U.S, and nearly 400 major teaching hospitals and health systems, including 51 run by the Department of Veterans Affairs in partnership with academic institutions like U-M.

While some universities have spun their teaching hospitals off to be financially independent or managed by outside hospital chains, others like U-M have kept them as part of the academic institution.

Research has shown that patients treated at major teaching hospitals have up to 20% higher odds of survival, compared to those treated at nonteaching hospitals. And more than half of the National Institutes of Health funding won by American scientists goes to researchers at academic medical centers. The discoveries they’ve made have saved an estimated 2.4 million lives just since 1991.

Not bad for a concept of unifying medical education, discovery and care that started in little Ann Arbor more than 150 years ago.

Watch a lecture by Joel Howell, M.D., Ph.D. about the history of the U-M academic medical center

Watch a brief video overview of our history