ANN ARBOR, Mich. -- They’ve devoted their careers to studying topics as wide-ranging as violent injuries, new drugs to address muscle loss, and the way microbes interact with our immune system. 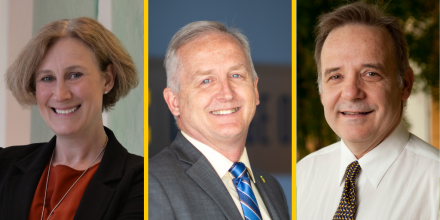 But today, they share a common achievement: election to the highest honorary society in the United States for researchers in medicine and health.

Rebecca M. Cunningham, M.D., is U-M’s interim vice president for research, director of the Injury Prevention Center and the William G. Barsan Collegiate Professor in the Medical School’s Department of Emergency Medicine. She also holds a joint appointment in the School of Public Health’s Department of  Health Behavior and Health Education.

Over the course of her career, Cunningham’s research has focused on injury prevention, opioid overdose, substance abuse prevention and public health. Recently, she has increased her focus on preventing firearm-related injury, and serves as a Principle Investigator of the national Firearm safety Among Children & Teens Consortium. FACTS, as it is known, is supported by the largest funding commitment in 20 years from the National Institutes of Health to reduce firearm injury.

The author or co-author of more than 170 scholarly publications and a book, Cunningham has led emergency-department-based research on substance use violence, particularly among children, and the development and application of behavioral interventions in the emergency setting. Her research and policy engagement are informed by her 20 years of clinical service in the emergency departments of Michigan Medicine, U-M’s academic medical center, and Hurley Hospital in Flint. Earlier this year, she won the Society for Academic Emergency Medicine’s Excellence in Research Award.

Cunningham also works to translate her research for greater societal impact. She served on the Michigan Prescription Drug and Opioid Abuse Commission, and often provides guidance and expert testimony across multiple levels of government. She also secured funding from the Fogarty International Center for the university’s Ghana Emergency Medicine Collaborative, which improves the provision of emergency medical care in Ghana through innovative and sustainable physician, nursing and medical student training programs.

Cunningham earned a Bachelor of Science degree from Fairfield University, and medical degree from Jefferson Medical College in Philadelphia.

Dalton, dean of the U-M College of Pharmacy since 2014, is widely recognized for his research on selective androgen receptor modulators, called SARMs for short. In 1997, Dalton’s group at the University of Tennessee was the first to report on SARMs, a discovery that launched a new class of potential drugs to treat age and disease-related muscle loss.

Prior to joining U-M, Dalton was an assistant and then associate professor at U-T from 1992 to 2000, and professor and chair in the Division of Pharmaceutics at the Ohio State University from 2000 to 2007.

Dalton took an entrepreneurial leave of absence from Ohio State in 2005 to join the Memphis-based drug development company GTx Inc. as vice president of preclinical research and development and chief scientific officer, to advance the clinical development of SARMs. He stayed at GTx, which licensed patents related to his earlier work and is now known as Oncternal Therapeutics, through 2014.

Dalton has received many awards and honors during his career, mentoring over 20 PhD students in his U-T and Ohio State labs, and twice winning the Excellence in Teaching Award.

Nuñez is the Paul de Kruif Endowed Professor in Academic Pathology in the Medical School’s Department of Pathology. He joined the U-M faculty in 1991 and was promoted to full professor in 2001, and is a member of the Rogel Cancer Center. He is recognized worldwide as one of the foremost experts in gastrointestinal and systemic inflammation, host-microbial interactions, and mucosal immunology.

In early work, his laboratory made seminal contributions to the field of apoptosis including the identification of multiple components of the cell death machinery and key regulatory steps in the apoptotic pathway. In the late 1990s, his laboratory identified NOD1 and NOD2, the founding members of the intracellular Nod-like receptor family.

The Nuñez laboratory showed that genetic variation in NOD2 is associated with the development of Crohn's disease — a groundbreaking discovery in the fields of complex genetic diseases and inflammatory disease. More recently, his laboratory has focused on mechanisms by which the intestinal microbiome regulates pathogen colonization and the activation of immune responses.

Collectively, these discoveries have provided critical insight into the mechanisms by which the immune system recognizes microbes and launches immune responses, which have profoundly impacted the understanding of host defense and the development of inflammatory diseases. In 2018, he was recognized for this body of work by the American Society of Investigative Pathology with its Rous-Whipple Award.

Nuñez has published more than 350 articles in peer-reviewed journals — many in top-tier publications like Nature, Science and Cell. His research has been cited more than 100,000 times. Nuñez has also mentored more than 100 young scientists, including over 60 postdoctoral fellows, many through the U-M Graduate Program in Immunology.