National Poll: Parents cite restaurants as most common source of food sickness in kids but just one-fourth check inspections before dining out.

ANN ARBOR, Mich. —   No parent wants to come home from a picnic or restaurant with a little one whose stomachache turns into much worse. 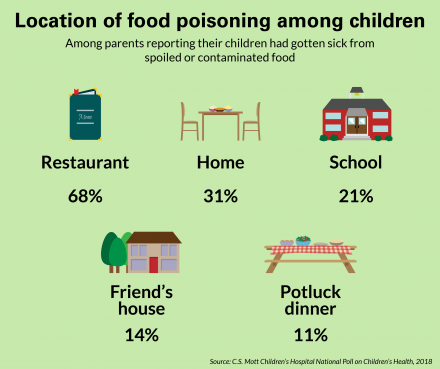 But few parents are using some simple strategies to protect kids from food poisoning outside the home, such as at a potluck or restaurant, according to a new report from C.S. Mott Children’s Hospital National Poll on Children’s Health at the University of Michigan.

One in 10 parents say their child has gotten sick from eating spoiled or contaminated food, with restaurants named as the most common source (68 percent.) But just a fourth say they check health inspection ratings before dining out.

“In most cases children recover quickly from food poisoning, but in certain cases it can be debilitating,” says Mott Poll co-director Gary L. Freed, M.D., M.P.H.

“It’s impossible to completely protect children from food-borne illness. However, there are strategies to try to reduce the risk of getting sick from eating spoiled or contaminated food. We found that while parents paid closer attention to food safety in their own home, they were not always as cautious about outside sources.”

Parents reported putting a lot of effort into food safety in the home.  Most parents said they wash their hands before preparing a meal (87 percent), wash fruits and vegetables before serving (80 percent), and check the expiration dates on refrigerated food (84 percent). If a refrigerated product was more than two days past its expiration date, 57 percent of parents said they would smell or taste it themselves to see if it was OK to eat, while 43 percent said they would automatically throw the food away. If parents heard that a food product in their home had been recalled, almost all would not feed it to their children with 58 percent reporting they would throw it away and 40 percent returning it for a refund or replacement.

Other sources of kids getting sick from spoiled or contaminated food included school (21 percent), a friend’s house (14 percent), or at a potluck (11 percent).

Foodborne illness affects more than 75 million people a year, most often caused by toxins, parasites, viruses, and bacteria – such as salmonella and E. coli. Food poisoning can occur when germs, either certain bacteria or viruses, contaminate food or drinks. This can happen at many different places in the process as food moves from harvesting to packaging to preparation to serving. Once contaminated food enters the body, some germs release toxins that can cause diarrhea, vomiting and sometimes fever or muscle aches. Hand washing, keeping cutting boards clean and washed and storing and cooking food at proper temperatures are also important when preparing and serving meals

Freed says an increasingly common germ passed on by unwashed hands is the virus, Hepatitis A. Hepatitis A vaccine is recommended for all children at one year of age and can prevent almost all cases in those immunized.

Symptoms of food poisoning start anywhere from an hour to three days after eating contaminated food. Freed says the most important initial treatment for food poisoning is making sure a child drinks plenty of fluids to prevent dehydration. Although food poisoning is a usually mild illness, there are multiple hospitalizations and even some deaths in the U.S each year.

“Contaminated food can make both kids and adults very sick very quickly. For very young children, whose immune systems are not fully developed, this kind of illness can present a greater risk of serious complications,” Freed says.