A long time coming: The saga of today’s University Hospital

Nearly 117 years after the first U-M hospital, the new facility opened in 1986, offering clinical care on a grand scale to inpatients and outpatients

When it opened in 1925, the University of Michigan’s flagship hospital was one of the largest, most modern facilities of its kind in the world.

old main and UH together 1980ssm.jpg 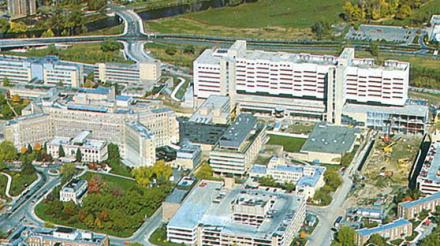 This aerial image of the U-M medical campus in the mid-1980s shows the Old Main Hospital, with its Y-shaped wings, and the new Univesity Hospital taking shape to its northeast. The construction site for the Taubman Center is also visible.

But by the 1970s, it was crowded, outdated, leaky and hard to keep clean.

It even had a fitting nickname: Old Main.

Its 18-bed open wards had little privacy -- and only two shared toilets each.

There was no central air conditioning.

In other words, just like U-M’s previous main hospitals that had opened in 1869 and 1891, the University Hospital at the corner of Ann and Observatory Streets needed replacing.

To make room for them, brand-new buildings had sprouted up since the 1950s, housing everything from children’s and women’s medical care to advanced biomedical research and health professions education.

Their sleek Mid-Century Modern design made the Art Deco-era Old Main look even more antiquated than it was.

The Old Main Hospital surrounded by the Medical School and original Mott Hospital and Outpatient buildings, in the 1970s.

After an independent report called Old Main’s condition “marginal” in 1971, the cries for a new hospital grew louder. The Medical School formed alliances with other hospitals to ensure that residents and fellows had enough opportunities to learn clinical skills, since Old Main couldn’t hold any more patients.

Finally, in December 1978, the University’s Board of Regents approved a plan to build not only a new general adult hospital, but an adjoining ambulatory care facility and other clinical buildings, on the bluff northeast of Old Main. To design it, they hired the same firm that had created Old Main, Albert Kahn Associates.

The state steps in

So great was the need, and so important was U-M’s advanced care to the people of Michigan, that the state government agreed to help foot the bill, to the tune of $173 million. That support, the equivalent of nearly half a billion in today's dollars, came despite an economic recession and high unemployment.

The state’s new Building Authority -- created by Governor William Milliken in a compromise with the state legislature -- agreed to act as landlord. It would sell bonds to raise the state’s portion and lease the building to the university until it was paid off.

The university committed to pay the rest of the bill, another $112 million, from donations and university funds. A. Alfred Taubman, a real estate mogul who had attended U-M, spearheaded the charge to raise funds.

And so began the journey to create what we now know as University Hospital and the Taubman Center. 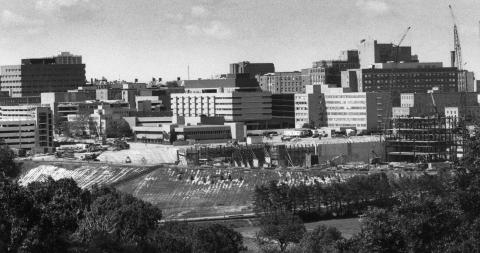 A view of the construction of the Replacement Hospital Project in the early 1980s, taken from Fuller Park.

Even though the need was proven, the road wasn’t smooth. A regional planning board disputed the need for U-M to provided non-specialty care, and the state’s largest insurer voiced its concerns about the cost. A statewide ironworkers’ strike delayed construction.

But the state Department of Public Health, which had the final say, approved not only the initial budget in 1979, but also a 1982 increase to ensure that the project included future improvements for children’s, women’s and psychiatric services. 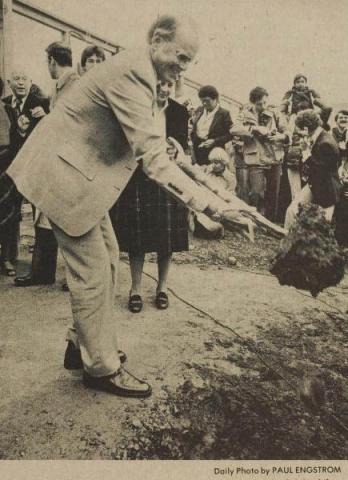 When it finally came time to break ground on October 15, 1981, U-M president Harold T. Shapiro called it “a joint project of the University of Michigan, the citizens of Michigan, and the city of Ann Arbor.” 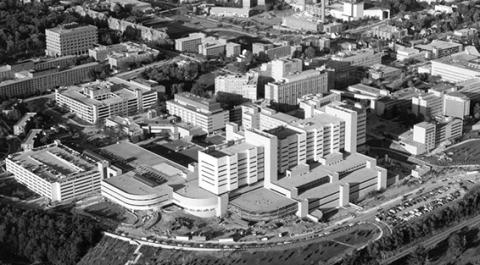 An aerial taken in the final stages of construction, with the Burn Center addition

Even as construction was under way, the project expanded even further in 1984, with the decision to build a Burn Center unit for adults and children above the emergency care entrance. The number of inpatient beds actually went down, reflecting the growing trend of caring for more and more illnesses on an outpatient basis.

By December 1985, some of the offices and pathology labs started opening, and the university began to tout the advanced features of the new 11-story, nearly 1.8 million square foot building.

Computer-based controls for everything from fire detection to security and medical records, “robot” carts to ferry supplies along tracks in the basement levels, and a modern patient food service were all part of the package. Advanced medical imaging equipment, operating rooms and clinical laboratories were readied for action.

Patients’ preferences had been taken into account, with single and double rooms replacing open wards, and windows built lower than in Old Main so that patients lying in bed could see outside. 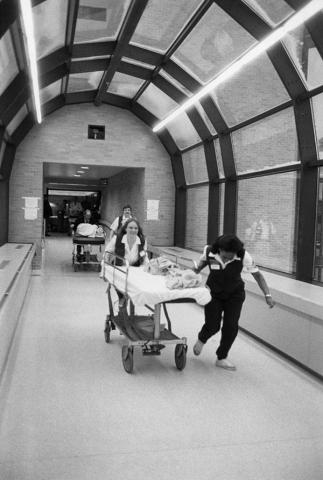 Moving patients and equipment to the new University Hospital

On Valentine’s Day 1986, a massive effort moved 400 patients from Old Main to the new hospital, wheeling them through the enclosed connectors built between the two generations of buildings. Meanwhile, outpatient staff prepared for the opening of 120 clinics in the Taubman Center the next week.

But even after the UH/Taubman complex opened, the Replacement Hospital Project wasn’t done.

In 1987, the Regents authorized an addition to the south end of the Taubman Center and the old Mott Hospital (now UH South) for a Maternal Child Health Center. Opened in 1990, it created new modern space for services for women and children, and paved the way for a new Birth Center in 1996 to replace the aging Women’s Hospital opened in 1950.

By 1989, Old Main and several 1930s-era buildings fell to the wrecking ball, after deliberations over repurposing them showed the cost would outweigh the benefit. 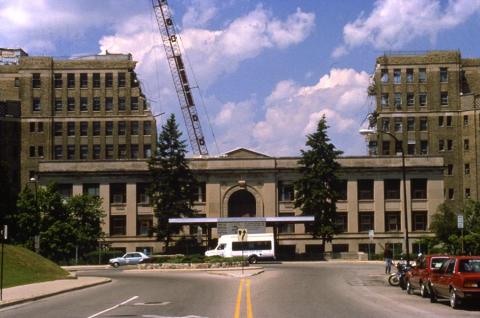 The demolition of Old Main hospital in 1989, seen from Observatory Street.

In fall 2003, the Frankel Cardiovascular Center began to rise on the site where Old Main once stood.

Today, University Hospital and the Taubman Center have been joined by the adjoining Rogel Cancer Center, and the massive Children’s and Women’s facility. The former Mott Children’s Hospital building has been renamed UH South and includes adult inpatient and short-stay care.

All told, the medical campus today includes 1,043 licensed inpatient beds – 550 of them in University Hospital. A project to expand inpatient capacity further is waiting for economic conditions to permit its continuation – similar to what happened in the 1920s during construction of Old Main.

A time traveler from 1869, or even 1969, might be overwhelmed by the massive scale of the modern Michigan Medicine main medical campus.

But the mission has remained the same since the first university-owned hospital in the United States opened in a former professor’s house on North University Avenue: to provide some of the best and most advanced care in the country, while advancing health through education and discovery to serve Michigan and the world.

Learn more about the history of our academic medical center, including our hospitals and Medical School, at http://uofmhealth.org/history .

150 Years at the Hospital: https://heritage.umich.edu/stories/150-years-at-the-hospital/