The Catherine Street Hospitals: The start of the modern U-M medical campus 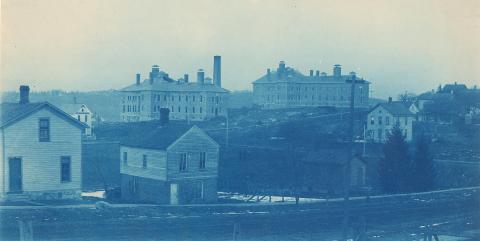 The new hospitals replaced the crowded, wood-frame one that we had opened in a former professor's house on North University Ave. in December 1869, and expanded in the 1870s. Moving medical care from the main U-M Diag to this site a few blocks north created a more fitting home for one of the nation's first academic medical centers.

The image above, taken from Ann St., shows the two hospital buildings in the last phases of construction, with wood-plank sidewalks in front. The hospital at right, called the Allopathic Hospital at first, sat uphill from the Homeopathic Hospital, which was operated by the short-lived and controversial Homeopathic Medical School.

By the early 1900s, when the image below was taken, the Homeopathic Hospital had moved elsewhere, and its building had become the main Medical Ward, while the Allopathic Hospital was converted for surgical patients. Both hospitals by this time had been outfitted with sun rooms at the south end of the building, where patients could "take the air" as they recovered.

In between, a new ward for children's care between the two hospitals, called the Palmer Ward, had been built just after the turn of the century. In the late 1800s, U-M partnered with the state to create a psychiatric care facility, the Psychopathic Hospital. Behind the structures lining Catherine Street, several more buildings rose northward on the bluff over the Huron River, including one for eye and ear care, a home for nurses, and infrastructure for power and laundry.

After the new hospital opened nearby in 1925, these buildings found new uses as convalescent homes, and even as the first home of U-M's Institute for Social Research. One by one, they fell to the wrecking ball in the mid- to late-1900s.

Today, the Taubman Health Sciences Library and the research buildings called Medical Science II and MSRB I, II and III stand where these hospitals once stood.

The map below, created for the U-M Millennium Project, shows the original Catherine Street buildings in red, the buildings that were added in the 1920s and beyond in yellow, and more recent buildings in orange. Some are still standing today. 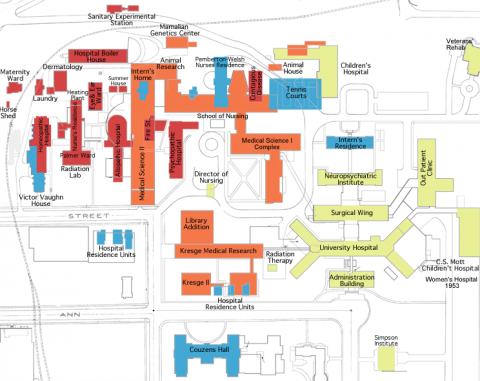 An interactive version of this map, with detailed descriptions of many buildings, is available here.

To learn more about the Catherine Street hospitals, read this story from Medicine at Michigan magazine.

To learn about the effort to replace these hospitals just a few decades later, and the impact of the post-World War I recession on that effort, read this story from Medicine at Michigan by U-M medical historian Joel Howell.