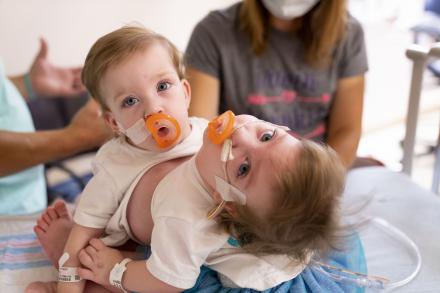 The nearly 11-hour surgery, which is the first of its kind at Mott and believed to be the first in the state of Michigan, involved a team of more than two dozen doctors, nurses and other specialists who spent months preparing for the complex procedure.

The twins, Sarabeth and Amelia Irwin, were connected from their chests to belly buttons. Each girl was born with two arms and two legs, individual hearts and digestive tracts, but their livers were connected.

“For everyone in the room, it was a very emotional and extraordinary moment when the last incision was made to separate these girls from one to two,” says George Mychaliska, M.D., pediatric and fetal surgeon at Mott.

“This was a monumental team effort that involved virtually every clinical department here and a group that was incredibly committed to collaborating in the most innovative way.”

Multiple teams across many specialties were involved with coordinating the separation surgery, each playing a unique role from pre-operative to post-operative care. Mychaliska led the surgical team, along with pediatric plastic surgeon Steven Kasten, M.D. and pediatric heart surgeon Richard Ohye, M.D.

Watch the video from the surgery on the Michigan Medicine YouTube channel.