Who Was That? The people behind the names of Michigan Medicine places and more

History is all around us on the main Michigan Medicine campus. Which isn’t surprising, given that our Medical School opened in 1850 and our first hospital admitted its first patients in late 1869 -- the first university-owned hospital in the country. 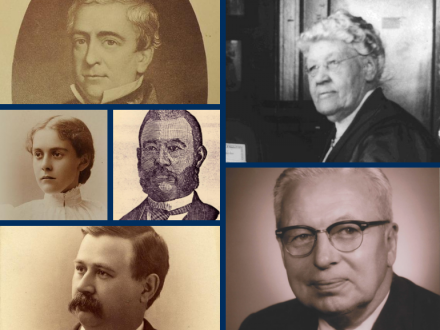 But who were the people whose names we see on buildings, lecture halls, organizations and more?

In many cases, they’re people directly involved in our past – founders, faculty or graduates of the Medical School, including physicians who treated patients at our hospitals and clinics.

As part of the ongoing observation of the 150th anniversary of our academic medical center, here are short descriptions and links to more information about some “famous names” enshrined physically or virtually at Michigan Medicine.

At the end, find a link to learn more about other names on major buildings – those of donors whose gifts honored their experience with our care or trust in our research, and foundations that gave us major grants. 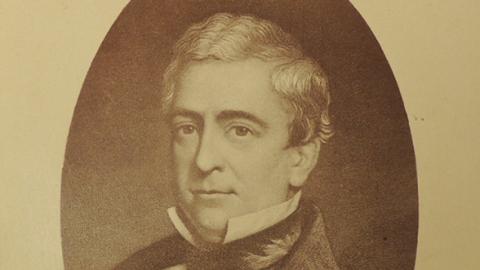 Zina Pitcher, M.D. – The 19th century physician with an unusual first name has a street named for him, between Huron and Catherine Streets. Pitcher was one of the first Regents of the University of Michigan, appointed in 1836 when he was a prominent physician in Detroit. He led the founding of the Medical School, arguing in 1847 that it should be "an example worthy of imitation” and that the physicians hired to teach there should be full-fledged members of the faculty, which was unusual at the time. An avid botanist, Pitcher also has a species of thistle named for him. Read more about him.

Victor Vaughan, M.D. - Dean of the Medical School for 30 years, and a noted expert in both toxicology and infectious disease, Vaughan’s name is on a red brick office building next to the Taubman Health Sciences Library that started out in 1938 as a dormitory for medical students.Read more about the building, about Vaughan’s time as dean and his role in the 1918 flu pandemic. An organization for medical students interested in history once bore his name, but it was removed in 2019 because of his support for eugenics. His son Henry Frieze Vaughan, Ph.D., was a noted epidemiologist and the first dean of the School of Public Health, and his name is on one of that school’s buildings.

Eliza Mosher, M.D. – As one of the first women to attend the Medical School, starting in 1871 and graduating in 1875, Mosher returned to campus in 1896 as the first female faculty member, a general physician to women students, and Dean of Women. In the intervening years, she had pioneered health programs for imprisoned women in New York. Her name, and that of her successor as dean, Myra B. Jordan, are now on the dormitory on Observatory Street. Read more about her.

Harry Towsley, M.D. – A 1931 graduate of the Medical School who went on to become chair of the Department of Postgraduate Education, Towsley was a champion of continuing medical education, and led the effort to help practicing physicians across Michigan update their knowledge and skills throughout their careers. He and his wife Margaret, an heir of the founder of the Dow Chemical family, gave funds for the creation of the Towsley Center at the heart of the medical campus. It opened in 1969 and includes the Dow Auditorium as well as a Simulation Center where thousands of medical professionals from U-M and beyond train each year. Read more about Harry Towsley here.

Moses Gunn, M.D. – One of the first five Medical School faculty, Gunn was an anatomy and surgery professor, and briefly served as dean. His name is now on the Department of Surgery’s annual research conference. Read more about him here.

In 2000, as the Medical School celebrated its 150th anniversary, seven lecture halls in its Medical Science I and II buildings and the first level of the Taubman Health Sciences Library building were renamed in honor of leading basic scientists from the institution’s past. Read about all of them here. A painted mural of all seven now hangs near the lower entrance of the Medical Science II building.

When new medical students arrive at Michigan, they’re “sorted” into one of the four houses, or longitudinal learning communities, of the M-Home program that was founded to provide personal and professional support throughout their medical education.

Each house is named for a pioneer from Michigan’s past:

If you’re in University Hospital, you might hear residents and faculty from the Department of Internal Medicine talk about the Sturgis, Francis, Hewlett, Dock and Newburgh services – shorthand for five inpatient units. They’re named for historical figures from the department’s past:

Most are profiled here; read more about Francis here.

These and other names of major donors and foundation benefactors are on several major buildings across our main and east medical campuses.

Learn more about some of them in this story from Medical Development, and these stories about the names on the Frankel Cardiovascular Center, the Rogel Cancer Center, and the Couzens residence hall that was built in the 1920s to house nursing students who were training at our new hospital (which stood where the CVC stands today).

And while the Kresge complex of buildings is no longer standing, the site where they stood at the corner of Zina Pitcher Place and Ann Street is now the future site of an inpatient facility. Read more about the buildings that stood there, funded in part by a gift from one of the founders of Kmart. Learn more about the history of the Kresge Hearing Research Institute that was founded there but is now housed in other research buildings.

Learn more about the history of Michigan Medicine