“Among the Finest Hospitals in the Country”: The University Hospital of 1925

A century ago, coming to the University of Michigan for medical care meant finding your way to one of eight medical buildings off Catherine Street, depending on your age and medical condition. 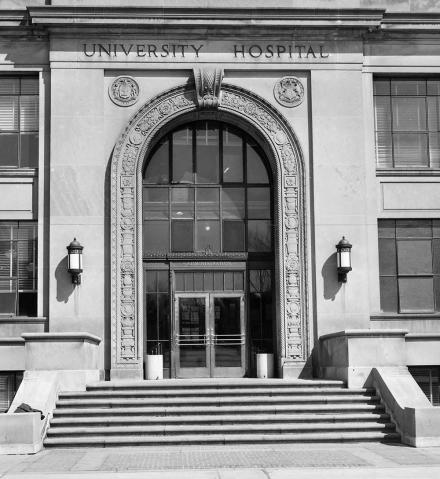 The cluster of cramped brick hospitals and converted houses didn’t look like much. But the care available inside still attracted thousands of people a year, who traveled from every county in the state.

Ninety-five years ago this week, the first patients arrived at the new University Hospital -- a massive, and thoroughly modern, medical marvel at the corner of Ann and Observatory Streets.

As they passed through the entrance’s carved limestone arch, they entered a bustling health care facility that gave patients of any age access to inpatient and outpatient care for nearly any condition.

Its architects drew on their experience creating innovative, efficient factories for Detroit’s car companies. They designed it from the ground up for 20th Century medicine, from advanced diagnostics to long-term rehabilitation, and from initial examinations to complex surgery.

The nine-story edifice served as the hub of U-M clinical care and education for more than 60 years, as a collection of new buildings sprouted around it. By the time the Replacement Hospital -- what we now call University Hospital -- opened in 1986, the 1925 hospital had gained the name “Old Main.”

When it closed, Old Main was just as outdated and over-filled as the hospitals built in the 1890s had been in the Roaring Twenties. But for much of the 20th Century, it offered the promise of modern care for all, a testing ground for new ideas and a training space for legions of health professionals. 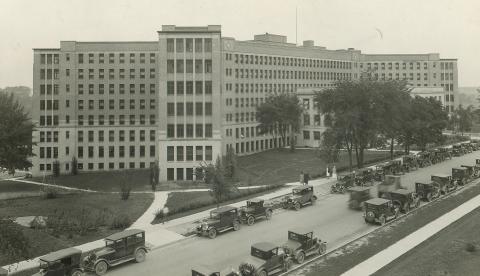 The University Hospital as it looked when it opened in 1925, at the corner of Ann and Observatory Streets in Ann Arbor.

Some facts about “Old Main”:

When it opened, the Detroit News compared the hospital with the Field Museum in Chicago and the General Motors building in Detroit. “In all, the state has provided its citizens with the best that money and skill can provide for its ailing citizens,” the editors wrote. “Those who have helped to bring this about, University authorities, state officials and private citizens have done a work of social statesmanship of the highest order.”

Meanwhile, the Detroit Free Press noted details down to the tan-and-blue bedspreads and wooden beds.  “When the new hospital is opened it will rank among the finest hospitals in the country. Everything in the hospital fittings were selected with the idea of breaking away from the old “institutional” idea.” 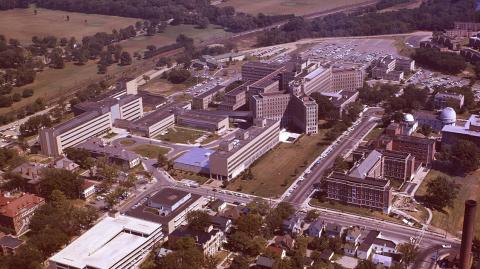 An aerial photo of the U-M medical campusin the 1950s or early 1960s, with the main University Hospital and its additions at the top right, and three of the remaining red brick 1890s hospital buildings visible at lower left. In between are the Medical School buildings built in the 1950s.

Learn more about Old Main and U-M’s other main hospitals, from the first one in 1869 to the current one, in this story from the U-M Heritage Project: https://heritage.umich.edu/stories/150-years-at-the-hospital/ and in the Encyclopedic Survey of U-M: https://quod.lib.umich.edu/u/umsurvey/AAS3302.0002.001/564:4.3

Read a detailed analysis of the hospital’s design, written by a Medical School alumnus, in this article in the Journal of the History of Medicine and Allied Sciences from 2012: https://muse-jhu-edu.proxy.lib.umich.edu/article/480066 (U-M Library login required) 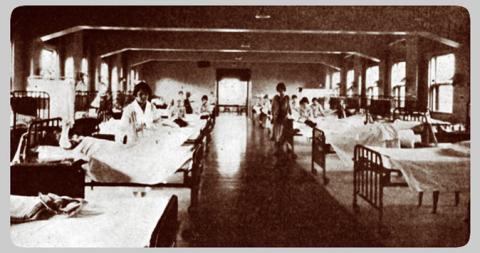 One of the large inpatient wards in the 1925 University Hospital 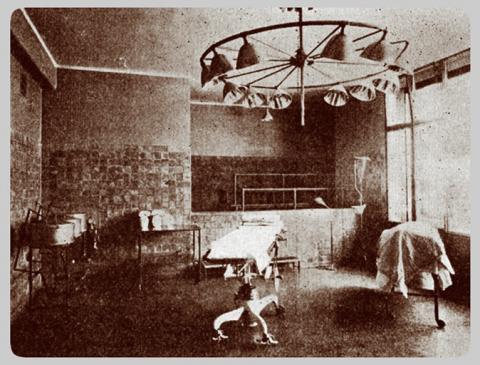 An operating room in the "Old Main" hospital opened in 1925. The walls were colored a light green, rather than white, in an effort to be less "institutional" in appearance. 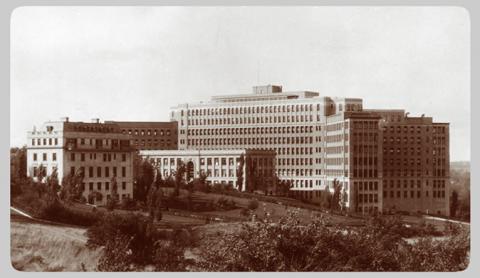 The new hospital was built to allow additional floors to be added - whch happened just six years after it opened, with two new levels for patients with tuberculosis and other infectious diseases, including our respirator center for people with polio.