Doctors in the house: History of medical interns and residents at U-M hospitals

Every July, a new crop of recent medical school graduates arrives at teaching hospitals nationwide – including hundreds at Michigan Medicine. 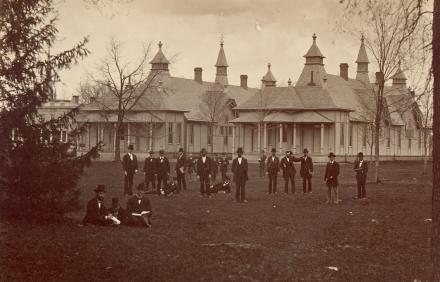 These "pavilions" were added to the original U-M hospital in 1876, just after the hiring of the first "house physician" to provide in-hospital care for patients who had come for treatment by the Medical School faculty.

They become part of what’s called the “house staff”, taking part in the care of patients while learning the particular field of medicine they’ve chosen to specialize in.

For their first year, they’re called “interns”, and after that “residents” or “house officers.” These terms roll off the tongues of everyone in an academic medical center without much thought.

But all those terms once had a very literal meaning at the University of Michigan’s hospitals, and many other medical centers that date back to the late 1800s and early 1900s.

That’s because the young physicians were actually required to live at the hospital – taking up residence in or near the building where they practiced. And at U-M, where the first hospital was in a converted house, the very first resident physicians were truly “house officers.” 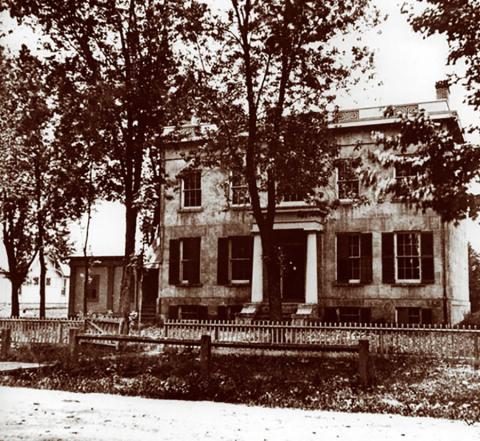 When U-M opened the nation’s first university-owned hospital in this converted professor's house in 1869, no physicians actually saw the patients who stayed there. Instead, the Medical School faculty would examine or operate on patients in front of the medical students in the school’s main building, across the field now known as the Diag.

A steward named John Carrington was hired to oversee the hospital building, and his wife served as matron. Together they checked patients in, made sure they were fed and had clean linens and well-tended fires in the winter, and charged them room and board. The medical care was free.

But by 1874, the faculty recognized the need for a physician to examine patients as they arrived, and provide care during their stay. The Regents set forth the duties of a new type of employee called a “hospital physician” as follows:

“Examine patients as they arrive, assign them quarters after they have paid the admission fee, and notify the physician to whose department they belong.

See that they receive proper food and that accurate record is kept of the treatment of each case. Dispense all the medicine himself and charge regular drug store prices, and charge for all dressings.

See that the hospital is kept in a comfortable and cleanly condition, shall prevent persons not belonging in the hospital from lounging in the building, and promptly report any irregularities occurring therein.”

They authorized the hiring of Robert J. Peare, M.D., an Irish immigrant who had graduated from the Medical School in 1869, as the first Hospital Physician. He oversaw the care of the 185 patients who stayed in the hospital – often for weeks at a time – when the hospital was open from October to July of his first year.

By 1876, a large addition to the hospital opened, called the Pavilion Hospital, and the first nurses were hired to work with this first resident physician and faculty.

As more and more patients sought care from U-M physicians, the Regents in 1877 authorized the hiring of one of the Medical School’s newest graduates, Alexander Maclean, M.D., as the first Hospital Surgeon.

Maclean even had a role in getting out the word that the hospital had expanded and had room for patients.

In advertisements starting in 1878 in the Michigan Medical News, a statewide journal, he wrote that “great improvements have been made in the equipment and accommodations of the Hospital so that every provision has been secured for the comfort and treatment of the sick and afflicted.”

He also explained in the ads that the resident physician would be available at the hospital to examine and treat patients arriving during the nine months of the year that the hospital was open. The exception: those arriving on Wednesday and Saturday mornings were encouraged to go directly to the Medical School building on East University Avenue, to be examined and treated by faculty during their clinic hours.

Maclean especially called for the supervisors of “county houses” – facilities set up for the care of the poor in each Michigan county – to send patients to this “well equipped public hospital” rather than allowing them to languish or die where they were. 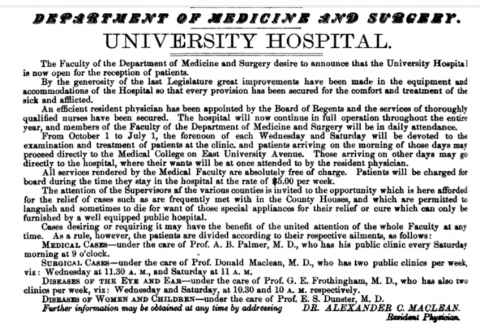 This advertisement was designed to attract more patients to the newly expanded U-M hospital.

Despite their usefulness in this advertising campaign, historical accounts say that house physicians in these early years were “essential to the proper conduct of a hospital, (but) for many years they occupied an inferior position and were more or less looked down upon by the hospital chiefs.”

By 1890, medical educators became convinced that post-graduation experience and training under the guidance of senior physicians was important for young doctors, before they could enter practice on their own.

At Johns Hopkins University, William Osler established America’s first formal residency program in 1889, as the institution’s first hospital opened and became a training ground for the students and recent graduates of the medical school founded a few years before.

In addition to the house staff, U-M’s first young physicians to be called “interns” were hired in 1899, and were paid $125 a year. They also received room and board in the hospital or nearby houses.

They were typically the top students in each graduating medical class, who competed fiercely to be chosen to stay on for additional training at the brand-new hospitals that had opened in 1891 on Catherine Street.

The Regents voted to keep the hospitals open every summer, starting in 1897, after a decade of being open during occasional summers but often closing for financial reasons. They spent extra funding from the state for summer operations to support staff salaries and operating costs. The start date for each summer was July 1 – still the traditional start date for interns to this day.

But Medical School professors soon recognized that some of their graduating students had asked for recommendations from faculty to try to secure internships at more than one hospital. Those faculty physicians even found themselves apologizing to their colleagues when a student took one hospital’s offer over another.

To remedy this, the faculty created a committee in 1911 to oversee all requests and recommendations for internships. They even briefly considered making the intern year a fifth year of medical school, devoted solely to clinical care, but this wasn’t put into practice.

In 1912, Reuben Peterson, M.D., a professor of obstetrics and gynecology, wrote a report to the Council on Medical Education of the American Medical Association, about the plight of interns.

He called for a more formalized approach to their training, to make the most of their time and ensure they were well-trained as well as serving patients. Hospitals and medical schools should partner on the selection and oversight of interns.

That approach, adopted at Michigan and eventually hospitals nationwide, persists today through the system of accreditation of academic residency programs at “teaching hospitals” nationwide.

Growth of the house staff 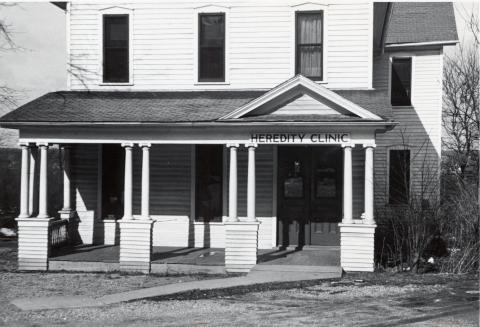 A house moved to the hospital grounds in 1914 to house interns later became the home of the nation's first Heredity Clinic for the diagnosis and care of genetic diseases.

By 1914, U-M had so many interns on board that it moved a house from another part of Ann Arbor to the grounds of the hospital to accommodate them. It soon needed expanding, and interns even moved in to occupy part of the hospital administration building.

In 1922, a new law required all medical school graduates to serve a year in an accredited hospital before they could enter practice. By 1927, the Medical School had formed a Department of Postgraduate Medicine to offer short courses in various fields to trainees from hospitals across Michigan, and to physicians already in practice.

The number of early-career medical trainees working at U-M hospitals continued to grow. According to the 1941 edition of the Encyclopedic History of the University of Michigan, “in 1940 thirty-five interns were on the Hospital staff. They rotated among the various clinical services. There were also approximately forty assistant residents, who served for a second year, and thirty resident physicians, who stayed for a third year.”

This designation of “program year”, abbreviated PGY, tracked where a resident was in his or her training, and is still used today. 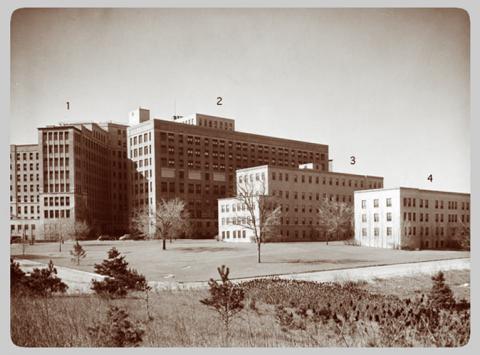 The Intern Residence, labeled with a 4, was attached to the University Hospital (labeled with a 1, and later called Old Main), and its surgical and psychiatric wings (2 and 3).

In order to keep interns and residents from leaving because they were unhappy with their living quarters, in 1939 an entire building called the Interns Residence was added to the main University Hospital that had opened in the 1920s.

It could house 75 men, in private rooms with private baths. It even had a recreation room, kitchen, dark room for photography, and handball court – though these were carefully built to be away from the bedrooms so that noise from interns enjoying their off hours wouldn’t disturb those who had just finished a shift and needed sleep.

As new departments formed within the Medical School, they formalized training programs for interns and residents who had chosen to focus on that department’s specialty. Competition for spots increased, as the reputation of the programs spread nationwide. The intern year was no longer a separate program from residency, but rather a nickname for the first  year.

Read reminiscences of residents from the mid-20th Century in this 2002 article from Medicine at Michigan magazine.

Today, Michigan Medicine has 106 post-medical school training programs – 26 residency programs and 80 fellowship programs. They’re coordinated through the academic departments of the Medical School, and the Office of Graduate Medical Education. Every year, around July 1, about 400 physicians start their internship or residency at Michigan Medicine.

At any given time, nearly 1,300 physicians bear the title of “house officer” at U-M – from the interns who start July 1 to senior residents who do research and provide leadership to their junior colleagues. And just as in 1874, Michigan Medicine’s hospitals and clinics couldn’t operate without them.