Michigan Medicine Ranked No. 5 Hospital in the U.S., No. 15 in the world by Newsweek 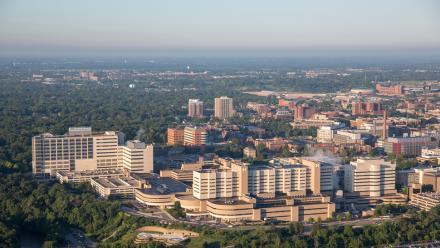 The institution also came in fifth in the United States and as the top hospital in Michigan.

The rankings are based on recommendations from medical professionals, patient surveys and key medical performance indicators, including patient safety, readmission rates and staffing levels.

“It’s our organization’s mission to advance health to serve Michigan and the world, and it’s an honor to be ranked in this year’s World’s Best Hospitals ranking,” says Marschall S. Runge, M.D., Ph.D., CEO of Michigan Medicine and dean of the University of Michigan Medical School. “We are pleased to be deemed an international health care leader.”

A new and independent global board of medical experts has helped create this year’s list, according to Newsweek. The board, chosen based on national and international expertise, is tasked with the constant development of the quality and scope of the World’s Best Hospitals Project.

Newsweek has reported on advances in medicine and science since its founding in 1933. For the last two years, the group has partnered with Statista Inc. to curate a ranking of the 100 best hospitals in the world.

For 2019-20, Michigan Medicine was also among the nation’s best hospitals and No.1 in Michigan in the U.S. News and World Report rankings. Hospitals are rated based on high-quality patient care, commitment to patient safety, clinical resources, family centeredness and other measures.

About Michigan Medicine: At Michigan Medicine, we advance health to serve Michigan and the world. We pursue excellence every day in our three hospitals, 125 clinics and home care operations that handle more than 2.3 million outpatient visits a year, as well as educate the next generation of physicians, health professionals and scientists in our U-M Medical School.

Michigan Medicine includes the top ranked U-M Medical School and the University of Michigan Health System, which includes the C.S. Mott Children’s Hospital, Von Voigtlander Women’s Hospital, University Hospital, the Frankel Cardiovascular Center and the Rogel Cancer Center. Michigan Medicine’s adult hospitals were ranked no. 11 in the nation by U.S. News and World Report in 2019-20 and C.S. Mott Children’s Hospital was the only children’s hospital in Michigan nationally ranked in all 10 pediatric specialties analyzed by U.S. News and World Report for 2019-20. The U-M Medical School is one of the nation's biomedical research powerhouses, with total research funding of more than $500 million. More information is available at www.michiganmedicine.org