Ensemble of scientists and health professionals will perform works by Beethoven, Ravel and Sibelius

Twenty years ago, a musical experiment started on the University of Michigan campus. A group of amateur musicians, all of them working or studying in medicine and science, put out the word that they wanted to form an orchestra for people like them. 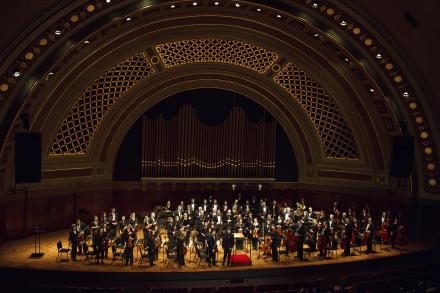 They weren’t sure anyone would show up for auditions. But dozens did. And year after year, they kept coming – even choosing to enroll or take a job at U-M instead of another institution because of the ability to keep playing their instrument.

On Sunday, January 12, the U-M Life Sciences Orchestra will kick off its 20th season of blending music, medicine and science, with a free concert at 4 p.m. at U-M’s Hill Auditorium under the baton of music director Tal Benatar.

The concert is free and open to the public, as is a pre-concert lecture at 3:15 p.m. in the lower lobby. No tickets are required, though the LSO accepts donations to support its concerts. 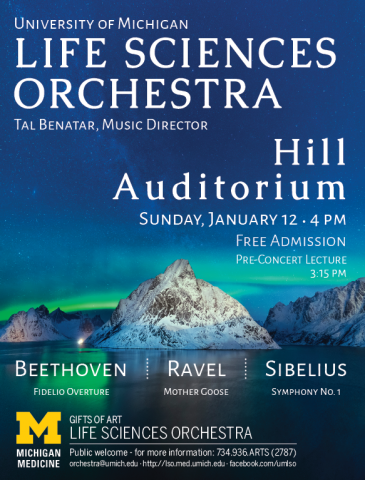 The performance will begin with the overture to Fidelio, the only opera written by Ludwig van Beethoven, followed by the fairy tale-inspired Mother Goose Suite by Maurice Ravel. It will conclude with Finnish composer Jean Sibelius’s First Symphony.

The program offers a wide range of orchestral colors, highlighting the musical talents of the LSO’s members, nearly all of whom are medical, health and science faculty, staff, students, retirees and alumni from across the university.

Benatar is pursuing a doctorate, and assistant conductor Nathan Bieber a master’s degree, in the renowned orchestral conducting program at the U-M School of Music, Theatre & Dance.

Benatar holds the Gilbert S. Omenn, M.D. Music Director position with the LSO, made possible by a gift from its namesake, the first U-M executive vice president for medical affairs and a longtime supporter of the LSO. He is also Assistant Music Director of the Michigan Pops Orchestra, and a multi-instrument performer of classical, contemporary and popular music.

The orchestra is part of the Gifts of Art program, which brings the world of art and music to Michigan Medicine. Plans to celebrate the 20th anniversary at the LSO’s concert at 8 p.m. on Saturday, April 11 are now under way.