ANN ARBOR, Mich. — Today, the U-M Board of Regents approved the appointments of George A. Mashour, M.D., Ph.D. as chair of the Department of Anesthesiology and the Robert B. Sweet Professor of Anesthesiology, effective December 1. 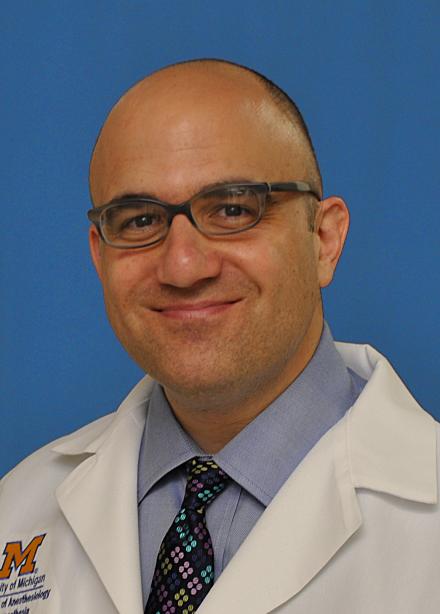 Dr. Mashour, formerly the Bert N. La Du Professor of Anesthesiology Research, has served the Medical School as associate dean for clinical and translational research and director of the Michigan Institute for Clinical and Health Research (MICHR) since 2015. He has also held the roles of associate chair for research in the Department of Anesthesiology since 2014, director of the Center for Consciousness Science since 2014, and executive director of translational research for U-M’s central Office of Research since 2016. Of these roles, he will relinquish all except for MICHR director, which he will continue to serve until a successor is named.

He received his medical degree and doctorate in neuroscience from Georgetown University, and studied neuroscience as a Fulbright Scholar in Berlin and Bonn. He completed his internship, residency, and chief residency at the Harvard Medical School and Massachusetts General Hospital. He was a fellow in neurosurgical anesthesiology at the U-M, and in 2007 was appointed assistant professor in the departments of Anesthesiology and Neurosurgery, with an additional faculty appointment in the Neuroscience Graduate Program. He was promoted to tenured associate professor in 2013, named the La Du Professor in 2014, and promoted to professor in 2017.

Dr. Mashour is an internationally recognized expert on the neurobiology of consciousness and general anesthesia. He has authored more than 200 publications and been the lead editor of five textbooks on anesthesiology and neuroscience. He currently serves as the principal investigator of several major NIH grants in the field of neuroscience, academic anesthesiology and translational science. He also serves on the steering committee of the NIH Clinical Translational Science Awards program and as a member of the NIH Surgery, Anesthesiology, and Trauma study section.

He serves on the boards of the Association of University Anesthesiologists and the International Anesthesia Research Society. He has received numerous institutional awards as well as national honors that include the Presidential Scholar Award from the American Society of Anesthesiologists and election to the National Academy of Medicine.

Said Mashour, “It is a privilege to serve in this role.  The Department of Anesthesiology is deeply committed to exceptional patient care, the education of outstanding clinicians and scientists, and research that improves health. I look forward to working with team members across the department, Michigan Medicine, and the community to fulfill this important mission.”