U-M team reaches final round in “March Madness” of science 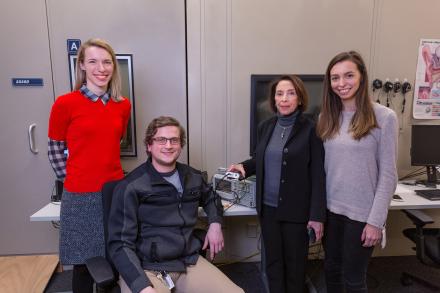 Members of the research team, including Dr. Susan Shore, second from right.

Every year, basketball fans rally around their favorite college teams in the March Madness tournament. But medical science has its own version, and a University of Michigan reseach team has made it all the way to the finals.

Two Michigan Medicine teams were picked to compete in the tournament, based on important research they published in 2018. One was beaten in the early rounds, but the other is competing against a team from the University of Utah for the championship. Anyone can vote for them, before Friday at 5 p.m. Eastern Time.

Voting is entirely online, and can be done here.

More about the Michigan Medicine teams:

The team playing for the championship is based in the U-M Medical School's departments of Otolaryngology, Molecular & Integrative Physiology and Biomedical Engineering, a joint department with the U-M College of Engineering. After years of basic research, they've developed a promising technique to treat tinnitus. That’s the condition that causes annoying, or even disabling, phantom noises in the ears.

Led by Susan Shore, Ph.D. of the Kresge Hearing Research Institute, they were chosen for their paper in Science Translational Medicine reporting research results from treating animals and humans.

Since the paper came out, they have enrolled more people in a clinical trial of the device they created after years of basic research into the causes of tinnitus. They’re seeking to commercialize the device, and they’re competing under the Michigan Medicine name.

Read more about this work on the Michigan Health Lab site.

Note: After spotting irregular voting patterns in the semifinal round, STAT rejected a large number of votes that were cast in violation of STAT Madness rules. That resulted in Michigan Medicine prevailing over Baylor College of Medicine. There is no evidence that Baylor had anything to do with the improper votes.

The other U-M team in the competition, led by residents and faculty in the Michigan Opioid Prescribing and Engagement Network or Michigan-OPEN, were chosen for a paper in JAMA Surgery. It proved that surgery patients in many hospitals were receiving prescriptions for far more opioid painkillers than they actually used. This raised their risk of persistent use of these medications.

The team used this knowledge to create the first-ever opioid prescribing guidelines for surgeons. They’ll compete under the name of the U-M Institute for Healthcare Policy and Innovation (IHPI); the lead researchers are residents and faculty in the departments of Surgery and Anesthesiology, and members of IHPI. Read the Michigan Health Lab story about this work.

Last year, Michigan Medicine made it to the Round of 8 in STAT Madness with an entry focused on antibiotic-resistant microbes in nursing homes. In the first year of the tournament the organization’s researchers who study the microbes that inhabit human lungs made it to the final round.