The Survival Flight team members specifically designed the jet’s interior for the acutely ill and injured patient populations they treat.

“There is nothing our nurses that designed this interior haven’t thought of,” says Denise Landis, clinical director of Survival Flight.

The fixed-wing aircraft is mainly used for pre-planned trips, including organ procurement and patients that need to be picked up from distances the rotor-wing aircrafts cannot reach.

“This jet will allow our organ procurement teams to fly as far as Las Vegas and back to Ann Arbor within a 12-hour shift,” Landis says. “Before, we would not be able to make it to such a far distance in one shift.”

The Learjet 75 will replace the program’s Cessna Citation Encore jet, which was acquired in 2001.

“Our former aircraft was a corporate interior and while it served us well for the past 17 years, we are constantly looking toward the future and improving our ability to care for patients,” Landis says. “This jet has been in process for over a year. It started out with a committee within the university with all of the stakeholders that fly in the aircraft coming together and deciding what is it we need to better serve our patients.”

Improved features of the jet include:

“The committee really looked at all of our equipment, weighed each piece and made space for it,” Landis says. “It’s a very mobile interior because we can pull things out and put them back in based on what we need for that particular patient or trip.”

“The beauty is we have options to do what’s best for our patients and our staff,” Landis says. “We’re excited to be able to go further, faster and be very dedicated to the diverse patients we transport.” 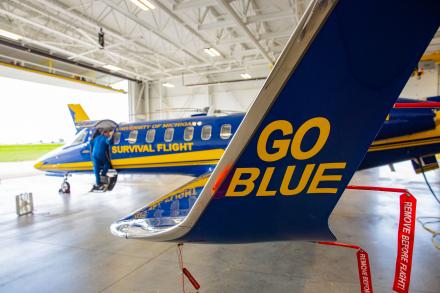 The Survival Flight team is committed to providing safe and rapid access to tertiary care using expertise generated from and proven through evidence-based research and best practices. The team is currently made up of 10 helicopter pilots, eight jet pilots, seven mechanics, 10 communication specialists, 24 flight nurses, an aviation manager, administrative specialist, a clinical supervisor, a clinical manager, as well as faculty from the Michigan Medicine Department of Emergency Medicine. To learn more about Survival Flight, please visit its website.