ANN ARBOR, Mich. -- March Madness isn't just for basketball anymore at the University of Michigan. A U-M team has advanced to the quarterfinal round in another tournament, with their eyes on the championship. 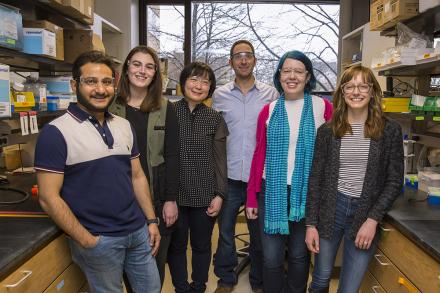 And while the potential prize in their virtual "tournament of science" is purely symbolic, the goal is very real: To spread awareness and appreciation for biomedical research done at U-M and other institutions nationwide.

The U-M team is part of STAT Madness, created by the STAT News organization. On March 1, the team beat the New York University Dental School's entry, to advance to the next round of competition. On March 8, the team beat an entry from the University of Texas Medical Branch to get to the "Science 16" round. And on March 15, they beat a North Carolina State team to get to the "Innov8" round.

Members of the public can learn about and vote for their favorite in all the matchups -- including the U-M entry -- at http://michmed.org/statmadness .

Last year, a team led by Michigan Medicine microbiologists and lung specialist Robert P. Dickson, M.D., represented U-M in the first STAT Madness tournament. Their discovery about bacteria in the lungs of critically ill patients made it all the way to the final round.

A team of microbiologists, systems biologists, infectious disease specialists and epidemiologists from across U-M has been picked to represent the university in STAT Madness, a virtual online tournament of scientific discoveries made in 2017.

This year, a team led by Evan Snitkin, Ph.D., represents U-M with research aimed at outsmarting "superbug" bacteria that have out-evolved even the most powerful antibiotics. The work was picked by STAT editors out of several entries submitted by Michigan Medicine.

The research, published in the Proceedings of the National Academy of Sciences in September 2017, uses a combination of real-world bacterial culture results and medical records from nursing home patients, and a computing approach known as systems biology.

It concludes that in order to reduce the risk of infection with a "superbug", health care institutions need to take an ecosystem-level approach, rather than one that aims at fighting just one antibiotic-resistant bacteria at a time.  Read more on the Michigan Health Lab site.

In the months since they published their findings, the team has continued to examine the way "superbugs" interact with one another, with non-resistant bacteria, and with the antibiotics chosen by care teams. They've also looked at how antibiotic-resistant microbes travel between and among health care facilities.

If the team beats East Carolina University's entry this week, it will go on to a new round of public voting among four teams next week. The tournament continues until the winner is announced April 2. (Full details here.)

No matter what the outcome in the STAT Madness tournament, the team is determined to help outsmart the bacteria that have outsmarted medicine's most powerful weapons. But they're hoping that fans of U-M, and of infection prevention, will help them rise to the top as a way of spreading awareness of their work.