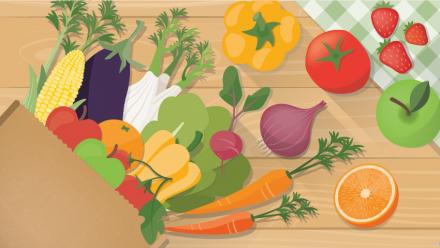 Access to fresh fruits and vegetables can be a challenge. They often cost more and have a shorter shelf life than canned and processed foods, preventing some low-income consumers from meeting their dietary needs.
“Diet-related diseases are disproportionately concentrated in low-income communities,” says Alicia Cohen, M.D., a clinical lecturer in the University of Michigan’s Department of Family Medicine and member of the Institute for Healthcare Policy and Innovation.
“One of the major barriers to eating more healthfully is cost.”
To help address this issue, and support family farmers, Michigan nonprofit Fair Food Network created the healthy food incentive program Double Up Food Bucks. Double Up matches Supplemental Nutrition Assistance Program dollars, formerly known as food stamps, on fresh produce, to help address the cost issue.
First launched in Detroit in 2009, Double Up is now a statewide program in Michigan, active at more than 250 sites, including farmers markets, grocery stores and other retail outlets. It has also become a national model for produce incentives in 22 states and counting.
By boosting families’ food dollars, Double Up and similar incentive programs have been shown to help increase fruit and vegetable purchase and consumption. But until now little was known about who uses the program — and how often they do so.
Cohen, whose research focuses on the intersections of food insecurity and health, led a study examining the program’s use at farmers markets, intending to help program administrators and policymakers understand the initiative’s effect. Her findings were published in the American Journal of Preventive Medicine.
Cohen and her team found that Double Up users at farmers markets are demographically similar to the overall Detroit SNAP-enrolled population, with the exception that Double Up users tended to be poorer and disproportionately female. How close Double Up shoppers lived to a market was a significant factor in how likely they were to return, highlighting the importance of accessibility.
Although only about 5 percent of Detroit SNAP-enrolled households used Double Up during the study period, Cohen emphasizes that is substantially higher than the approximately 1.5 percent of SNAP enrollees who shop at farmers markets nationally.
"Diet-related diseases are disproportionately concentrated in low-income communities. One of the major barriers to eating more healthfully is cost."
The details
For the work, the researchers linked two years of Detroit farmers market transaction logs with state administrative SNAP data to understand who was using the program at farmers markets. They also studied the demographic characteristics of Double Up users compared to the Detroit SNAP-enrolled population at large.
In total, Cohen’s report showed 21,541 confirmed SNAP and Double Up Food Bucks transactions June through November 2012, and July through October 2013. This resulted in a total of $410,400 in SNAP benefits redeemed and an additional $318,222 in distributed Double Up Food Bucks.
A total of 11,983 unique individuals used Double Up over the study period. Users of the program were predominantly female (72 percent), African-American (74 percent) and came from households living below the federal poverty line (87 percent).
Although nearly 12,000 SNAP enrollees redeemed incentives during the two-year period, only about one-third had repeat transactions during this time.
The Double Up model
Cohen says these findings need context. It is important to note how the program works in order to better understand the results.
When visiting a participating farmers market, shoppers take their SNAP EBT Card, which acts like a debit card, to a farmers market information booth prior to shopping. For every SNAP dollar they spent, they get a 1:1 match, up to $20 per visit, in Double Up Food Bucks tokens, which are redeemable for Michigan-grown produce.
They may choose to spend their SNAP or Double Up tokens right away or at a later date. Double Up tokens can also be used at any participating Double Up market in the city or state.
“It’s possible we are underestimating how many times people are using Double Up at farmers markets,” says Cohen, explaining she was only able to track initial electronic transactions people made with their SNAP cards and the amount they redeemed, not the number of visits over which they used their tokens.
Shoppers with repeat transactions were more likely to live closer to the farmers market and identify as white, the study showed. Rate of repeat transactions also varied by farmers market, indicating that certain characteristics specific to individual markets, such as the number of vendors, location, availability of kid-friendly activities, etc., may also affect Double Up use.
Improving access
Studies have shown that SNAP recipients don’t make worse food choices than other Americans, but the reality is they typically have more limited means.
The Double Up Food Bucks program — created to stretch low-income families’ food dollars while creating an economic incentive for healthier food — was the first statewide SNAP incentive program. Double Up is known for its uniform program design, marketing and central administration, and strong link to local agriculture.
“Incentive programs are a promising way to increase healthy food access. But more research is needed to better understand how to improve outreach and reduce barriers to use,” says Cohen. “Finding a way to address barriers can help maximize the impact of these programs among Americans at greatest risk of diet-related disease.”