Stress, reward & a few surprises found in poll of those who take care of loved ones with dementia

Only 1 in 4 caregivers use support resources meant for them, U-M/AARP National Poll on Healthy Aging finds

ANN ARBOR, MI – They don’t get pay, recognition, or much of a break. They spend hours a day helping someone who may not even recognize them anymore. 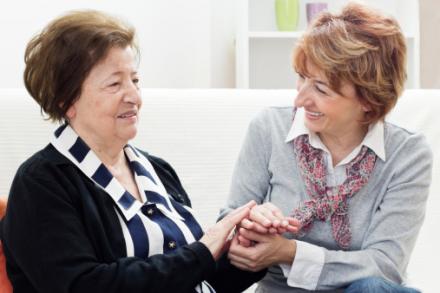 Now, a new poll gives a glimpse into the lives of the spouses, grown children and other family members and friends who act as caregivers for up to five million Americans with dementia.

The strain of providing such care for loved ones with Alzheimer’s disease and other conditions came through in the latest results from the National Poll on Healthy Aging, with 78 percent saying caregiving was stressful.

But the poll also reveals the positive side of caregiving, with 85 percent of family caregivers calling it a rewarding experience. In fact, 45 percent rated it as “very rewarding”, compared to 19 percent who called it “very stressful”. However, 40 percent of those who called dementia caregiving very stressful also said it was not rewarding.

Another potential benefit? Perspective. Ninety-one percent of the caregivers said they had thought about their own future care needs because of their experience taking care of someone with dementia. 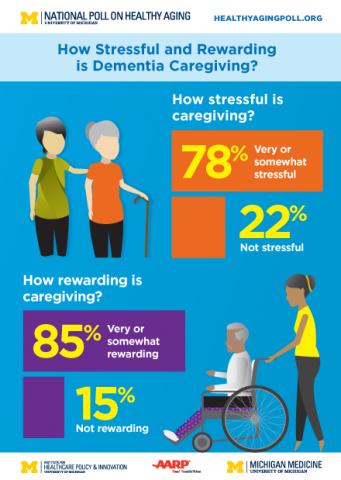 Right now, though, 66 percent of dementia caregivers say their duties interfere with their own life and work – including 27 percent who said they had neglected something related to their own health because of caregiving’s demands on their time.

Only 1 in 4 had taken advantage of resources designed to help caregivers, but 41 percent of those who didn’t expressed interest in such support.

The poll was conducted by the University of Michigan Institute for Healthcare Policy and Innovation. It is sponsored by AARP and Michigan Medicine, U-M’s academic medical center.

Knowledge to build on

The results are based on responses from 148 people between the ages of 50 and 80 who take care of a loved one over age 65 with dementia.

This group made up seven percent of a nationally representative sample, so they represent a sizable number of older adults across the general population. The poll team hopes the findings can form the basis for further exploration of caregiving issues specific to dementia.

“We need to understand the challenges, benefits and barriers that dementia caregivers face, because of the important role they play for their loved ones, in their families, and in our society and economy,” says Erica Solway, Ph.D., associate poll director and IHPI senior project manager. “We can see from this report that better support to these family caregivers is needed, which health care providers, family, friends, social service organiations, clergy and policymakers can all help to address.”

Caregivers were most likely to be women, under age 65, and taking care of a parent. Nearly half were employed in addition to being caregivers. They took care of medical needs, household tasks, and other activities to keep their loved one safe. One-quarter said the person they were caring for couldn’t be left alone for more than an hour.

Solway notes that the experience of caregiving may actually help encourage the kind of planning that many Americans haven’t attended to but should – such as completing advance directives, designating someone to make medical decisions in case of serious illness, or engaging in conversations about their wishes as they age.

“Caregiving is a complex experience that affects people across every demographic,” says Alison Bryant, Ph.D., senior vice president of research for AARP. “Providing family caregivers with resources to support them in balancing work and life pressures and reducing their stress is critical not only for them but also for those that might care for them in the future.”

The need for resources 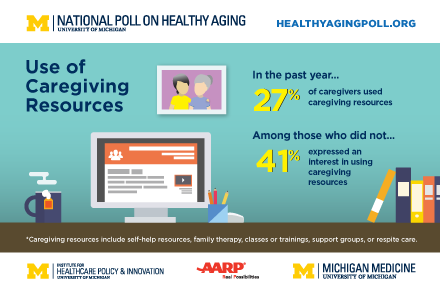 The rise in the number of people with dementia has led to the creation of many resources for caregivers that can provide vital support. These range from self-help tools and classes for learning new skills that may be needed in the role, to support groups and respite care that can help give caregivers a break from their duties.

Though the poll didn’t ask why caregivers had or had not turned to such resources, the data do suggest that many caregivers who are not currently doing so want to access them. A lack of time may be a key factor, since two-third of the caregivers in the poll said that their caregiving duties had interfered with work, family time, or even getting to the doctor when they had a health problem.

Organizations such as AARP are developing and deploying more local and online resources for caregivers. Health care providers who tend to dementia patients’ medical needs could be a key gateway to specific local and electronic resources for their patients’ caregivers, Solway notes.

But she also observes that health care providers should routinely ask patients if they serve as a caregiver to a loved one, so they can identify and address needs and concerns during the caregiver’s own appointments.

The poll results are based on answers from those who identified themselves as dementia caregivers among a nationally representative sample of 2,131 people ages 50 to 80. The poll respondents answered a wide range of questions online. Questions were written, and data interpreted and compiled, by the IHPI team. Laptops and Internet access were provided to poll respondents who did not already have it.

A full report of the findings and methodology is available at www.healthyagingpoll.org.

The poll will issue its next findings in late November; sign up for email notifications on the website.