ANN ARBOR, Mich. -- For more than a century, going to medical school has meant basically the same thing across the country: four years of learning about human anatomy and physiology, and how to diagnose and treat the diseases that afflict us. 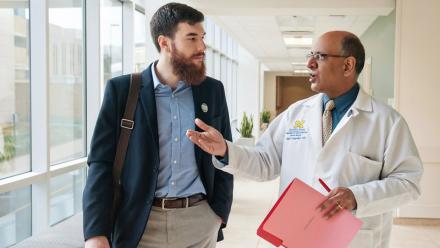 Every med student got roughly the same education, then chose a particular type of care to focus on in their residency.

But in the last few years, more med schools have added optional “scholarly concentration” tracks that students can pursue even while earning their medical degree. You might think of it as a “minor” – an add-on to their “major” in medicine.

A University of Michigan Medical School team has just published the first national study of this phenomenon. It shows that 74 percent of the top American medical schools now offer scholarly concentrations to their students.

Most schools offer five or six choices, the team reports in the journal Academic Medicine. The topics vary widely, with 199 distinct options available across the 43 schools that rated in the top tiers of U.S. News & World Report’s two medical school ranking charts.

But a close examination showed that all the “minors” at all the schools boiled down into 10 buckets, or domains of related topics.

Most popular was global health, offered by nearly all of the schools that allowed students to choose a concentration. Next on the list were research-related specializations, followed by ethics and humanities, health policy, and medical education.

“All of these schools, including Michigan, offer scholarly concentrations to give students a grounding in critical thinking, problem solving and methodology in a particular area of focus. This has been missing in the traditional curriculum,” says Jesse Burk-Rafel, the U-M fourth-year medical student who led the study. “Certainly, all medical students learn clinical problem solving, but a concentration allows a school to formalize a more scholarly community that surrounds students with faculty and other students with the same intellectual curiosity about that subject matter.”

A path to more paths

Burk-Rafel and his co-authors didn’t do the study just to take the temperature of current medical education. They were actually on a mission to help their own school.

Michigan had launched its first scholarly concentration, which it called a Path of Excellence in Global Health and Disparities, in 2011. It built on the school’s burgeoning strength in global health, and attracted students interested in reducing health disparities overseas and in the U.S.

But by that year, when Burk-Rafel was a second-year student, Michigan’s medical education leaders knew they wanted to increase the number of Paths of Excellence even further, to meet student remand.

The question was how to do it – and not over-do it.

For the answer, Burk-Rafel and his colleagues turned to the school’s current students. Even though most were too far along in their training to be able to choose a path for themselves, more than 450 students -- nearly two-thirds of the student body -- took part in a survey to understand what topics interested Michigan’s students most.

The survey used an approach called exploratory factor analysis or EFA, allowing students to rank their preferences, and even enter the same rank for choices they liked equally well. The survey listed choices similar to those documented in the national study, but with additional choices that link to the strengths of Michigan’s faculty.

This let the researchers see what kinds of paths would give the most students the chance to get into their first or second choice of topic, while still allowing the school to expand its Paths of Excellence program in a manageable way.

The expansion of the Paths was part of a much larger reimagining of the entire curriculum, which Burk-Rafel and other students were helping plan.

The survey results factored directly into how Michigan expanded its Paths of Excellence program to eight choices. Each path has its own faculty advisors, special experiences and a capstone project requirement for each student.

“The additional paths really allowed us to hit the sweet spot,” says Burk-Rafel. “Below six, we wouldn’t be offering students the choices that would satisfy them, but with eight paths total, students can overwhelmingly find an area of interest and get placed into their first choice.”

Heather Wagenschutz, M.A., M.B.A., who co-directs the Paths of Excellence program and leadership training for U-M medical students, notes that many people took part in the planning of the new paths.

“We gathered as many perspectives and ideas as we could but reached a decision making point: how many paths did we have the resources for, and which paths would be the "right" combination,” she says. “The thoughtful institutional needs assessment and the EFA on preferences gave us the data-driven approach we craved. This assured the work group on how to proceed in the best direction and helped to inform final content development.”

Ironically, Burk-Rafel’s own interest – medical education – was chosen as the basis for the Scholarship of Learning and Teaching Path, but it rolled out too late in his medical school career for him to choose it.

Still, he knows that the new paper, his involvement in the curriculum redesign, and his selection as a presenter at the Association of American Medical Colleges’ national Research in Medical Education conference, show his devotion to the subject.

Now, as he interviews at residency programs around the nation in preparation for the next step in his training, he sees his self-directed concentration in medical education as an asset.

He hopes the same will be true for future students who choose one of Michigan’s Paths. Even if they don’t go on to work in the specific area they focus on during medical school, the experience of engaging in a scholarly effort can set them apart during residency and beyond.

“Concentrations allow students to distinguish themselves, by showing what they’re passionate about with a deliverable – a presentation, website, paper or other project that they completed through their concentration,” says Burk-Rafel. “They can show that to people to say, ‘This may not be what I continue to do long-term, but the process of doing this and skills I’ve learned are valuable to addressing problems and leading change.’ ”

In the end, he says, “these programs help foster students’ passions, capitalizing on their interests but adding value through mentorship and structure. That will pay real dividends down the line to improve patient and community health.”