Kidney disease hospitalization and mortality rates continue to decline in the U.S. 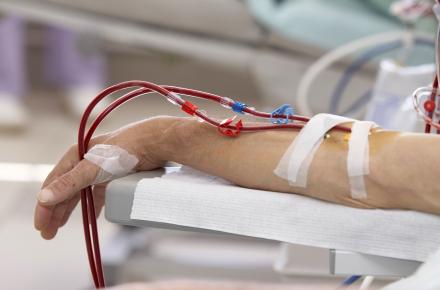 ANN ARBOR, Mich. – According to an annual data report from the United States Renal Data System (USRDS), hospitalization and mortality rates for patients with chronic kidney disease continue to decline in the U.S.

Along with those rates, the report highlights several current trends in kidney disease in the U.S., including Medicare spending in the patient population and number of kidney transplants.

This year’s report provides data from 2014 and is released by the USRDS coordinating center based at the University of Michigan Kidney Epidemiology and Cost Center, in partnership with Arbor Research Collaborative for Health.

The report states that hospitalization rates among end-stage kidney disease patients decreased to 1.7 admissions per patient per year, as compared to 2.1 in 2005, or a reduction of 19 percent. End-stage kidney disease is the last stage of chronic kidney disease when the kidneys can no longer remove waste and excess water from the body, and dialysis or kidney transplantation is necessary for survival.

In addition, mortality rates continue to decrease for dialysis and transplant patients, falling by 32 percent and 44 percent, respectively, since 1996.

“Most recent estimates indicate 14.8 percent of U.S. adults have chronic kidney disease,” says Rajiv Saran, M.D., professor of internal medicine at the University of Michigan and director of the USRDS coordinating center. “Fortunately, we’ve seen steeper declines in mortality rates in more recent years in this patient population, which is promising.”

Other highlights from the report include:

“An interesting note on kidney transplants is a relatively recent initiative called kidney paired donation,” Saran says. “The initiative is aimed at increasing the availability of living donor transplants, and in its simplest form is essentially when two living donors do not match with the respective recipients and decide to perform an exchange whereby the donation goes to each other’s compatible recipient. Kidney paired donation transplants have risen sharply in recent years with 552 performed in 2014, representing 10 percent of living donor transplants that year.”

According to Saran, earlier diagnosis and treatment of chronic kidney disease can improve patient outcomes.

“As newly reported cases of end-stage kidney disease continue to happen each year, physicians and patients need to have continued dialogue about the disease and how best to manage it,” Saran says. “We hope this report provides fellow clinicians and researchers with valuable information they can use when discussing the disease with their patients and colleagues.”

Disclosures: Dr. Hal Morgenstern is a consultant at Arbor Research Collaborative for Health. Dr. Jennifer Bragg-Gresham is a consultant with IMPAQ, and with Medical Education Institute (MEI) involving quality of life performance measures.