ANN ARBOR, Mich. -- Fewer motorcycle riders who are involved in crashes across the state of Michigan are wearing a helmet, and the state’s trauma centers have seen a 14 percent increase in head injuries among motorcyclists, since the state’s partial repeal of its universal helmet law in April 2012, a new study finds. 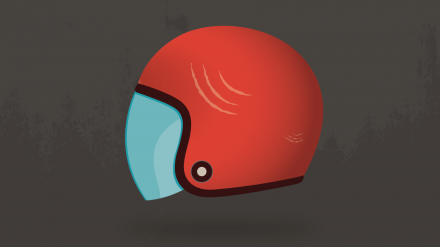 In addition, emergency physicians and trauma surgeons are seeing a shift in the types of head injuries resulting from motorcycle crashes, with the proportion due to mild concussions falling 17 percent, while the proportion due to skull fractures increasing 38 percent during the same time period.

The study was conducted by a team of researchers from the University of Michigan Injury Center, which is funded by the federal Centers for Disease Control and Prevention, as well as the University of Michigan Transportation Research Institute and the Insurance Institute for Highway Safety (IIHS). The study compared statewide rates of helmet use, fatalities, and serious head injuries for the 12-month periods before and after the repeal.

The partial repeal allowed Michigan motorcycle riders 21 years of age or older to legally ride without wearing a helmet if they have passed a motorcycle safety course or held the motorcycle endorsement on their driver’s license for at least two years. In addition, they must also have at least $20,000 in first-party medical benefits.

Helmets, research has proven, are a key injury prevention measure. Prior studies have shown that helmets decrease the risks for fatal and non-fatal head injuries by 69 percent and the overall risk of fatality after a motorcycle crash by 42 percent.

In the current study, published online today in the American Journal of Public Health, the researchers cite prior studies in other states that have demonstrated both the success of universal helmet laws at increasing helmet use among riders and the detrimental impact of similar repeal efforts in other states on the rates of head injuries and fatalities.

Still, “No previous studies have examined the effects of Michigan’s repeal on head injuries or fatalities in a statewide context,” says Patrick Carter, M.D., lead author of the study and an Assistant Professor of Emergency Medicine in the U-M Injury Center.

Carter, joined by team members from the U-M Injury Center,  the U-M Medical School Department of Surgery, UMTRI and IIHS, began by analyzing two data sets: police-reported crashes that captured both in- and out-of-hospital fatalities, and head injuries among patients hospitalized at trauma centers. This second dataset was formed by linking police-reported crashes to statewide trauma registry data from all 23 Level-1 and Level-2 Michigan trauma centers.

Researchers examined helmet use, fatalities, and head injuries from the 12 months prior to and after the repeal, and included 7,235 riders involved in police-reported crashes and 1,094 riders hospitalized at trauma centers. Both data sets included motorcycle operators or passengers who were 16 years of age or older and riding a motorcycle in Michigan and who were involved in either a police-reported motorcycle crash, or evaluated and treated at a Michigan trauma center for a traumatic injury between April 12, 2011, and April 12, 2013.

What Carter and his colleagues found should give motorcyclists pause before they head out on the road without the protection provided by a helmet.

Helmet use dropped 24 percent among riders involved in crashes, and 27 percent among those seeking care at trauma centers, following the repeal.

Although the number of motorcyclist fatalities statewide did not increase, motorcyclists who were not wearing a helmet in a crash had a fatality rate of 5.4 percent -- nearly twice as high as the 2.8 percent rate for riders wearing a helmet. That’s on top of the 14 percent increase in head injury rates overall.

Among the crash-involved riders and trauma patients sampled before and after the repeal, researchers also found that not wearing a helmet doubled the odds of a fatality and the odds of a head injury among those involved in a crash or treated at a trauma center.

"Head injuries can have a devastating impact on the long-term health of motorcyclists and their families after a crash," Carter says. "The 14 percent increase in head injuries observed in our study is consistent with the negative public health impact we have witnessed following similar repeals in other states.”

Carter hopes the sobering results can be used to inform policymakers about the motorcycle helmet law and how the repeal is affecting the health of citizens.

“This study provides important data that should be considered as part of the policy debate regarding the importance of universal helmet laws for preventing injury," he says.

The study was published in the American Journal of Public Health. Co-authors on the study were Mark Hemmila, M.D., M.S., a professor in the U-M  Department of Surgery, the Insurance Institute for Highway Safety (Dr. Cicchino), and the University of Michigan Transportation Research Institute (Dr. Buckley, Dr. Flannagan, Dr. Bingham, Ms. Almani, Mr. Bowman).