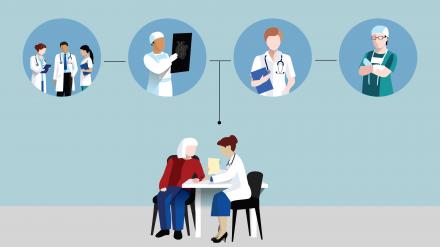 A new study finds that heart surgery patients’ chances of survival depends in part on the overall level of teamwork among all the physicians who cared for them across their surgery preparation, operation, hospitalization and recuperation.

The finding was made by a team of researchers at the U-M Medical School, just a few miles away from the stadium where Schembechler once coached.

Using data from 251,000 older Americans who had heart bypass surgery, they mapped the interactions among the 466,000 doctors who cared for them, and show the importance of tight “social networks” of physicians to patient outcomes.

They’ve published their results in the new issue of Circulation: Cardiovascular Quality and Outcomes, and hope to test their model in other conditions and by considering other types of providers beyond physicians. They’re already studying the effect further, using anthropology research techniques in the U-M Comprehensive Cancer Center.

“Surgical care is complex, involving multiple providers dispersed across locations over time,” says John Hollingsworth, M.D., M.S., lead author of the new paper and a urologist at U-M. “Our findings show that physician teamwork influences patient outcomes, even more than some measures of comorbid illness.”

The more often their physicians worked with one another in the past on the care of other patients, the lower their current patients’ chances were of ending up in the emergency department or hospital, and their chances of dying, within the first two months after their operation.

The researchers created their model of physician teamwork based on Medicare data that showed which physicians from nearly all disciplines had treated the same patients 30 days before and 60 days after their hospitalization for surgery. They factored in measures of the social and healthcare environment in the communities where the bypass surgery hospitals were located, and data on each patient’s 60-day outcomes.

The results were striking. A 25 percent increase in the measure of teamwork was associated with 17 fewer readmissions for every 1,000 patients treated.

That’s only slightly less impact than a similar-size increase in a measure of education in that same regional community; higher levels of education are already known to be associated with better surgical results.  A 25 percent increase in a measure of how complex and sick patients are – called a Charlson score -- only accounted for one extra readmission per 1,000 patients.

Hollingsworth and his colleagues, including senior author and U-M cardiologist Brahmajee Nallamothu, M.D., MPH, note that regions varied widely in their teamwork ‘score’. To illustrate, their paper shows a map of ties among physicians who treated patients who had their operations in 2011 in two Texas hospitals 90 miles apart -- one in Waco and the other Fort Worth.

The teamwork effect persisted no matter how large or small the number of bypass operations performed at a given hospital, or the type of hospital. Large academic medical centers tended to have lower teamwork scores because they receive far more patients who are referred to them from physicians far outside their local area who they don’t work with often. This may help explain why those hospitals don’t always score high on Medicare’s measures of patient outcomes.

“A lot of the focus in improving care is focused on the acute hospitalization for an episode of care. We believe that this focus is too myopic because it ignores the care delivered prior to the hospital stay and after discharge,” says Hollingsworth. “Efforts to improve teamwork, and outcomes, need to consider the entire care continuum.”

Hollingsworth and Nallamothu are both members of the U-M Institute for Healthcare Policy and Innovation. They worked with U-M cardiac surgeon Frank Pagani, M.D., Ph.D., and U-M sociologist Jason Owen-Smith, Ph.D., as well as Russell Funk, Ph.D., who earned his economic sociology degree at U-M and now is at the University of Minnesota. Their work was funded by the Agency for Healthcare Research and Quality (HS020927).

The researchers are now hoping to look at other data from Medicare and beyond to see if the teamwork effect has a similar impact on outcomes in other types of care, and in care covered by other forms of insurance. Because only physician names are captured in the bills sent to Medicare, they will need to look for other ways of assessing the impact of teamwork among nurses, nurse practitioners, physician assistants, physicians still in their residency training and front-end staff.

New funding from the National Science Foundation is fueling their studies of how networks evolve on the ground level in medicine, by observing the interactions among physicians who share patients. By understanding what factors influence physicians’ ties, and the flow of patients among them, says Hollingsworth, they hope to point out opportunities to strengthen teamwork and improve patient outcomes. The effort has started in the U-M prostate cancer clinic, and the team is looking for other clinics to join in.