A lot of blood, for no reason? U-M team concludes that common, costly clot test has few benefits

ANN ARBOR, Mich. — A half billion dollars – at least -- gets spent each year on blood tests to see which hospital patients have a genetic quirk that makes their blood more likely to form dangerous clots. 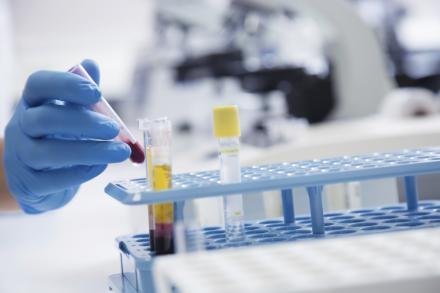 And most of that spending probably isn’t necessary, according to a new paper by a University of Michigan Medical School team.

Writing in the Journal of Hospital Medicine, they review what’s known about testing for the trait called inherited thrombophilia, and call for a drastic cut in the test’s use by doctors across America.

After all, they write, hospitalized people who have already had such dangerous clots, called venous thromboembolisms or VTEs, don’t need a positive genetic test to justify taking medication and making other changes to prevent future ones.

And there’s no evidence that medication to prevent clots will help hospital patients who haven’t yet had a VTE. Testing their DNA for inherited thrombophilia won’t change that.

In other words, the authors say, ordering inherited thromboembolism testing on inpatients is something doctors do for little or no reason. And according to the team’s analysis of data pulled from medical records, they do it hundreds of thousands of times a year in Medicare patients alone.

Often, it appears, the test gets ordered to satisfy curiosity about why a patient had a VTE, to see if they’re among the seven percent of Americans with a genetic mutation that makes blood more prone to clot.

There are several tests for several traits, so patients often get them in combination – what’s called a “hypercoagulable workup.”  But if doctors are following guidelines grounded in evidence, the test result should rarely change a patient’s care.

So, except in very specific cases where such clots are highly likely – such as women with a family history of clots who are pregnant or getting hormone replacement therapy – there’s probably not much reason to do the test at all.

“More testing is not always better,” says Christopher Petrilli, M.D., an assistant professor of internal medicine at U-M and co-first author of the new paper.

“Testing for this disorder is almost never beneficial, and in fact can even be harmful because it can cause undue psychological distress for the patient, and unnecessary expense for the healthcare system,” he adds.

“Physicians and patients should resist the temptation to perform costly search for an underlying genetic cause of venous thrombosis,” says co-first author Lauren Heidemann, M.D., also an assistant professor of medicine.

Petrilli and Heidemann – both hospitalists who specialize in treating patients in the U-M Health System’s University Hospital -- have set out to address such “no reason” testing at UMHS and beyond.

They’ve co-founded a local chapter of the group Providers for Responsible Ordering, which aims to help physicians, nurse practitioners and physician assistants reduce over-testing and use health care resources appropriately.

They’ve also led the effort to make UMHS one of more than 40 founding members of the High Value Practice Academic Research Alliance, which is working to bring institutions together to help one another implement strategies that make better use of resources.

The current climate of public attention on new genetic testing options and personalized medicine could make this difficult in some cases, they note in the paper.

Ideally, genetic tests to find out whether someone carries a certain genetic trait should be used when there’s clear information about the risks, benefits and costs of that test.

“With national health care spending reaching an unsustainable level, we as physicians need to be vigilant about becoming stewards of health care resources,” says Heidemann.

For the paper, Petrilli, Heidemann and their colleagues reviewed the full scope of literature and established guidelines on inherited thrombophilia testing. They illustrated the situation by applying this information to a hypothetical case of a young patient with a VTE but no family history who suffers a pulmonary embolism – a dangerous health emergency where clots form in the lower extremities and travel to the lungs, potentially cutting off oxygen to the body unless treatment starts quickly.

They note the conclusions about VTE prevention and treatment that have been reached by several medical bodies – including an American College of Chest Physicians guideline recommending against giving clot-prevention medication to people with the genetic trait but no VTE history.

A group that looks at genetic testing, the Evaluation of Genomic Applications in Practice and Prevention (EGAPP) Working Group, concluded that tests for inherited thrombophilia were likely not cost-effective.