When things go wrong after surgery, a patient's fate – and bills – can vary widely by hospital, study finds

ANN ARBOR, Mich. — Having major surgery comes with many risks, including problems that can crop up hours, days or even weeks after the patient leaves the operating room. Called complications, they can be deadly, or require far more care in the hospital and beyond before the patient recovers. 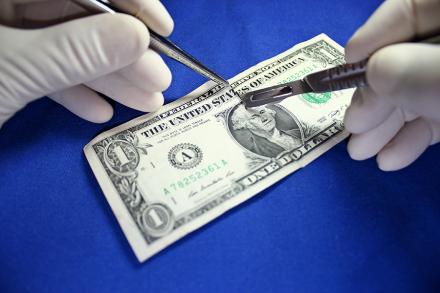 A new study shows just how much that care can cost, in the hospital and beyond, and how widely hospitals can vary in their ability to keep patients from suffering, or dying from, the same complications.

For the first time, it shows that hospitals vary widely – as much as two- or three-fold -- in what they get paid for caring for patients with the same complications from the same operation.

It also finds that the hospitals with the highest costs for such care also tend to be the ones where patients suffer the most complications in the first place.

In a new paper published online in JAMA Surgery, a team from the University of Michigan Medical School and Institute for Healthcare Policy and Innovation reports on their analysis of Medicare records from more than 576,000 people over age 65 who had four common operations. All of them had a hip replaced, an aortic aneurysm repaired, or a section of lung or intestine removed on an elective basis over a four-year period ending in 2012.

More than one in every 10 patients who had an aorta, lung or intestinal operation suffered one of the eight major complications the team studied, including infections, blood clots, serious bleeding, pneumonia, heart attack and lung or kidney failure. Just over 1 in 50 of the hip replacement patients did too.

But, says senior author and U-M surgeon Hari Nathan, M.D., Ph.D., the real surprises came when the authors standardized prices for hospitals across the country, and started comparing hospitals to one another.

“We can see substantial variation in care, and cost, after a major complication occurs, even when we account for the type of complication and other factors,” says Nathan. “This represents a real opportunity for hospitals to be more efficient in how they prevent and manage complications, for how Medicare incentivizes better care at lower costs.” 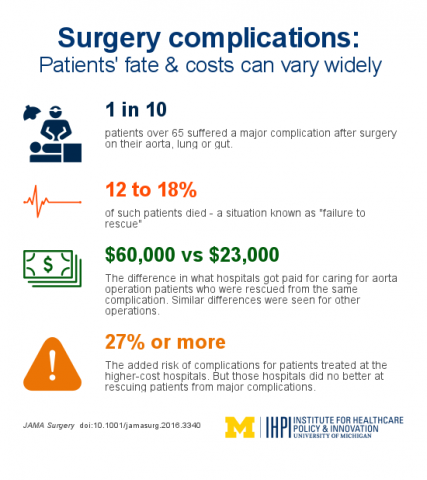 Nathan and first author Jason Pradarelli, M.D., M.S., used data from the Medicare Provider Analysis and Review system, which gives a broad view of care and costs including outpatient and post-acute care such as in skilled nursing facilities. They took into account patients’ other underlying health issues, age and other factors. Pradarelli led the analysis while he trained at U-M before leaving for his surgical residency at Brigham and Women’s Hospital.

The ability of hospitals to “rescue” patients from death when a major complication erupts is a growing area of focus for researchers. But until now no study has been able to show what the cost is for patients who were rescued versus those who were not, and died.

“Failure to rescue”, the term for a death from a complication, occurred in 3.4 percent of elective hip replacement patients, and nearly 18 percent of those who had a section of intestine or lung removed – operations called colectomy and pulmonary resection, respectively.

The researchers then looked more closely at the costs of care for patients who were rescued from a complication, and divided hospitals into groups.

Those with the highest cost of rescue had higher rates of all complications, and of major complications. But they weren’t more likely than lower-cost hospitals to actually save someone’s life from a major complication, nor to give patients a better shot at surviving the first month after their operation.

Future work by Nathan and his colleagues will look more closely at exactly what kinds of variation in care actually occurs at different hospitals. Factors such as standard protocols, availability of intensive care beds or high-level overnight staffing on general hospital units, and much more may play key roles, he says.

The study was mainly supported by the National Institutes of Health training grant that funds the U-M Masters of Science in Clinical Research program, which Pradarelli completed while at U-M.