ANN ARBOR— Two University of Michigan researchers have won the Director's New Innovator Award from the National Institutes of Health for novel approaches to solving major challenges in biomedical research.

Dus studies how our brains and genes shape our desire for sweets, and which biological functions contribute to the grip that sugar has on millions of people who can't seem to kick their addiction to it.

Dus will use her $2 million, five-year grant to attempt to demystify how nutrients regulate eating behavior by changing the activity of neurons in the brain.

"Our work will help us understand how the dietary environment influences the choice of when, how much and what to eat, and shed light on why we reach for that second cupcake even if we've already eaten enough calories for that day," Dus said.

Dus feeds fruit flies different diets and then looks at how neurons in their brains respond to the nutrient levels. She wants to know how chemical changes related to diet permanently alter the neurons and the insects' behavior.

Her work is related to epigenetics—changes to genes caused by environmental influences, such as what we eat or drink, that don't alter the DNA blueprint but rather turn genes on or off. Epigenetics influence many aspects of our behavior, from stress to drug addiction to eating.

"This will help us understand how overeating is linked to diseases such as depression, cancer, aging and neurodegeneration," Dus said.

Only about 2 percent of New Innovator Awards are funded annually, and only about 40 awards are made each year. This is the second such award to MCDB faculty since 2013.

"That we have two scientists in this department with these awards is a testament to the strength of neuroscience research in MCDB," said department chair Robert Denver. "The Innovator Awards are a vote of confidence in their research." 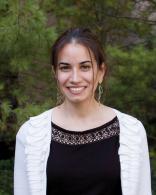 Hammoud's work in human genetics seeks to understand how sperm transmit information from fathers to offspring through factors that go beyond the DNA sequence, and to define the molecules that may be responsible.

The DNA within sperm cells is wrapped tightly around proteins, including ones called histones. In other cells of the body, changes to histones can change how often genes are turned on or off—and in sperm cells, changes to histone levels or the histones themselves can lead to major developmental problems in the offspring. But scientists don't yet know how these changes are transmitted from father to offspring, or why those developmental problems occur.

Working with specially bred mice, Hammoud's team can follow the father's proteins from the sperm through the fertilization of an egg, and study what happens when they interfere with the normal processes of embryo development.

Hammoud said that the flexibility offered by the New Innovator funding means she can try experiments that carry more risk than she might otherwise.

"This allows you to ask questions, and develop new tools, some of which may or may not work," she said.

She also noted the key role of the Reproductive Sciences Program and the U-M Center for Organogenesis for funding her work, which also extends to studying sperm production and the forms of infertility that can stem from problems with that process.

“This selection of Sue Hammoud as a 2016 NIH New Innovator Award recipient is a well-deserved honor for her work.  It is also reflective of the active collaborative research environment and support for junior faculty at the University of Michigan," said Drs. Sue Moenter and Gary D. Smith, Co-Directors of the UM Reproductive Sciences Program. "Her recruitment to U-M was fostered by one of President Coleman’s cluster hire initiatives.  This specific initiative focused on advancing reproductive sciences across campus.  The collective altruistic efforts of numerous chairs (Drs. Sally Camper, Timothy R.B. Johnson, David Bloom, Bishr Omary, Valarie Castle, Douglas Noll, and James Douglas Engel) made her recruitment possible.  In a short period of time, her research on genetics and epigenetics of sperm/egg development and function has enriched the collaborative transdisciplinary research within the UM’s Reproductive Sciences Program. We look forward to further great things from her laboratory.”