ANN ARBOR, Mich. -- Can stem cells help reveal the roots of mental illness, and open the door to better treatment? 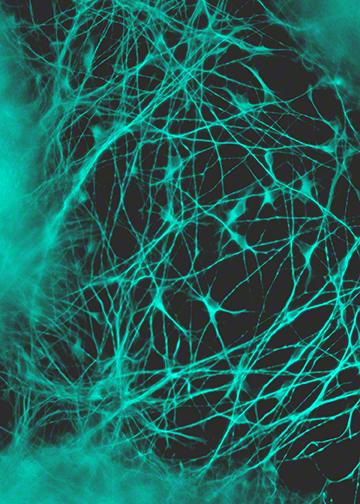 Stem cells derived from skin samples of people with bipolar disorder can be used to grow neurons like these, which can help scientists understand the condition and find new treatments.

A team of University of Michigan scientists who have helped pioneer this approach will now work with researchers around the country, in a $15 million national effort to take the research to a new level.

The U-M Medical School team will play a key role in a new scientific consortium that will develop ways to  quickly screen libraries of drugs for potential effectiveness against schizophrenia and bipolar disorder.

These systems will be based on stem cells specific to those mental illnesses, including ones first developed five years ago by U-M scientists funded by the Heinz C. Prechter Bipolar Research Fund.

The consortium, funded by the National Institute of Mental Health and led by the Johns Hopkins University School of Medicine and the Salk Institute for Biological Studies, includes four academic or nonprofit institutions and two industry partners.

Bipolar disorder affects more than 5 million Americans, and treatments often help only the depressive swings or the opposing manic swings, not both. And though schizophrenia is a devastating disease that affects about 3 million Americans and many more worldwide, scientists still know very little about its underlying causes — which cells in the brain are affected and how — and existing treatments target symptoms only.

With the recent advance of induced pluripotent stem cell (iPSC) technology, researchers are able to use donated cells, such as skin cells, from a patient and convert them first into stem cells, then into any other cell type, such as neurons. Generating human neurons in a dish that are genetically identical to patients offers researchers a potent tool for studying these diseases and developing much-needed new therapies. 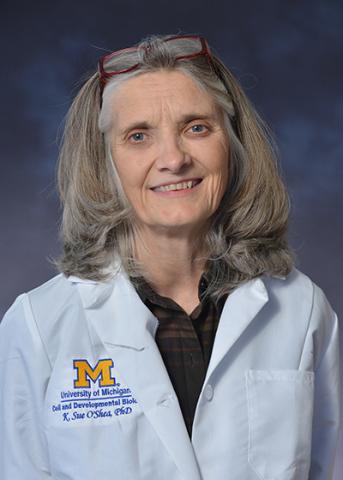 U-M stem cell biologist Sue O’Shea, Ph.D., has led iPSC work for nearly a decade, and led the development of the first bipolar-specific stem cell lines in 2011. She notes that the combined strength of the research teams in the new consortium will accelerate the progress of research.

"In addition to standardizing the assays we use to characterize iPSCs, an important aspect of this research is increasing the power of our work,” says O’Shea, who heads the Michigan Pluripotent Stem Cell Core and is the Crosby-Kahn Collegiate Professor of cell and developmental biology as well as a professor of psychiatry. “If U-M can develop and study 25 to 30 bipolar cell lines, multiplying that by four academic sites significantly increases our sample size and the likelihood that we will identify meaningful changes in neurons and astroglia, the key brain cells thought to be involved in bipolar disorder."

A major aim of the new collaboration is to improve the quality of neurons and glia differentiated from iPSC, which has been limited in the past by a lack of standards in the field and inconsistent practices among different laboratories.

The teams will use iPSCs generated from more than 50 patients with schizophrenia or bipolar disorder so that a wide range of genetic differences is taken into account. By coaxing iPSCs to become four different types of brain cells, the teams will be able to see which types are most affected by specific genetic differences and when those effects may occur during development.

First the researchers must figure out, at the cellular level, what features characterize a given illness in a given brain cell type. To do that, they will assess the cells’ shapes, connections, energy use, division and other properties. 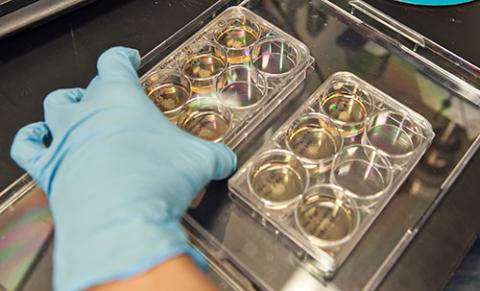 Under carefully controlled conditions, a small sample of human skin can be coaxed to become induced pluripotent stem cells, which can then be grown into other types of cells for use in research.

They will then develop a way of measuring those characteristics that works on a large scale, such as recording the activity of cells under hundreds of different conditions simultaneously. U-M scientist Geoff Murphy, Ph.D., a member of the Molecular and Behavioral Neuroscience Institute and an associate professor of physiology, will perform key electrophysiology studies for this effort.

Once a reliable, scalable and reproducible test system has been developed, industry partners will have the opportunity to use it to identify or develop drugs that might combat mental illness.

The researchers also expect to develop a large body of data that will shed light on the molecular and genetic differences between bipolar disorder and schizophrenia. And, since other mental health disorders share some of the genetic variations found in schizophrenia and bipolar disorder, the data will likely inform the study of many illnesses.

O’Shea and Melvin McInnis, M.D., who directs the Prechter research effort and is the Thomas B. and Nancy Upjohn Woodworth Professor of Bipolar Disorder and Depression at U-M, recently published a review of iPSC models of bipolar disorders in the June issue of Molecular and Cellular Neuroscience. In March 2014, they published the first results from studying several lines of iPSCs they had derived in 2011 from individuals participating in the Prechter Longitudinal Study of Bipolar Disorder.

The National Cooperative Reprogrammed Cell Research Groups program, which is funding the research, was introduced in 2013 to overcome barriers to collaboration by creating precompetitive agreements that harness the strengths of academic and industry research. 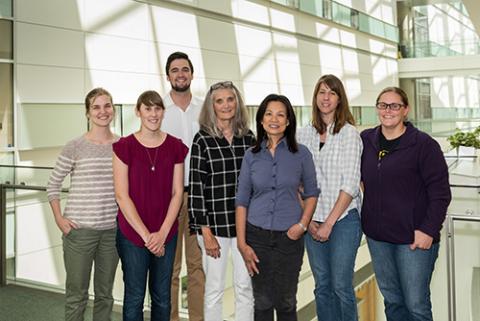 The research team of the O'Shea laboratory.

The project is led by Hongjun Song of the Johns Hopkins University School of Medicine, and Rusty Gage of the Salk Institute. Anne Bang, of the Sanford Burnham Prebys Medical Discovery Institute, is another lead academic partner. Industry partners in the effort are Guang Chen, Janssen fellow and Scientific Director of Neuroscience at Janssen Research & Development; Husseini K. Manji, Global Therapeutic Area Head of Neuroscience, at Janssen Research & Development, and Paul Doran, Strategic Alliance Manager at Cellular Dynamics International. The research is supported by grant MH106434.