Advanced care for treatment-resistant illness in adults and teens

ANN ARBOR, Mich. — A new mental health treatment unit at the University of Michigan Health System will expand the availability of a highly effective therapy for people with severe forms of depression and other illnesses. 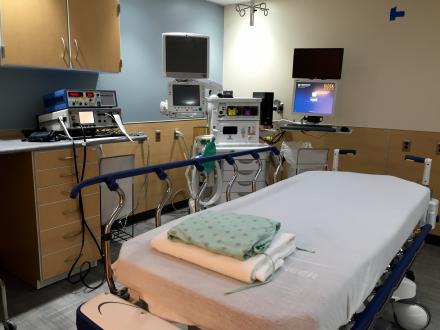 The treatment room of the new ECT unit

On July 11, the U-M Department of Psychiatry will open its new location for electroconvulsive therapy, or ECT – an approach that can help patients who haven’t benefitted from any other treatment.

A $3.6 million project converted a 9,500-square-foot area of University Hospital South from unused operating rooms to a state-of-the-art ECT suite. Demand for ECT care at UMHS has more than doubled since early 2000s.

Patients come to U-M from several states, and sometimes beyond, to receive a course of ECT treatments that can bring remission-level relief from symptoms of severe illness. ECT is based on electrical stimulation of the brain, delivered while a patient is under sedation.

The program treats adult and teen patients with treatment-resistant depression, intense mania associated with bipolar disorder, psychosis in psychotic disorders like schizophrenia, and those in catatonic states due to a mood disorder, psychosis-causing conditions, or neurological crises. It also uses ECT to quell self-injury behaviors in people of any age with severe autism. Patients must be referred to the program by a psychiatrist.

The new unit is designed to provide a much better patient experience, and consolidates services that had been spread between the ninth and first floors of University Hospital. It will also help ease congestion for other patients in those areas.

The new unit’s enhancements will improve patient and family experience through features such as: 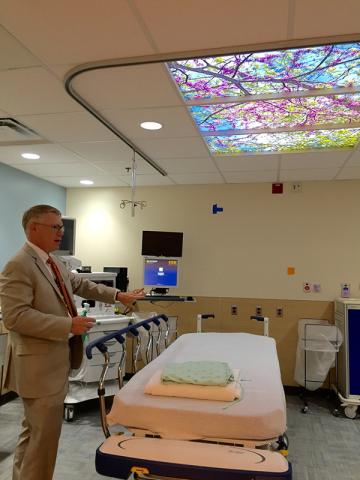 Dr. Daniel Maixner in the
treatment area of the new ECT unit.

“For those who have exhausted other treatment options, and for their families, we’re proud to open this enhanced, expanded facility,” said Daniel Maixner, M.D., an associate professor of psychiatry at the U-M Medical School and director of the UMHS ECT Program. “In our new unit, we will be able to provide three to four ECT treatments per hour, greatly expanding our current capacity of about 2,000 treatments per year – perhaps by 50 percent or more.”

Maixner is a member of the U-M Depression Center, and of a U-M team that also offers other forms of psychiatric neuromodulation, including vagus nerve stimulation and repetitive transcranial magnetic stimulation.

But the modern form of the therapy has evolved over several decades, with thousands of studies showing ECT’s power to ease devastating, even life-threatening symptoms. Insurance coverage for ECT is generally very good, as evidence of its impact has been well established. 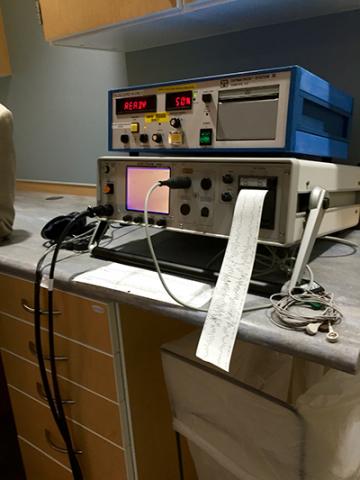 The machine used in ECT treatment.

Doctors at U-M and other centers continue to refine ECT’s use. A U-M team recently published an analysis of results from 32 studies, which reveals key factors that might help doctors better target ECT for those who can benefit the most.

For many people who receive ECT, a single course of treatments can give results that last months or even years. But some patients require a longer, tapered course of treatment in a “maintenance” mode to keep their symptoms at bay.

UMHS is one of few programs offering ECT for adolescents. ”For families searching for alternatives because their child’s mental health condition hasn’t responded to other treatments, ECT can be a lifeline,” Maixner says. “Families travel hundreds of miles to U-M to get treatment for teens who have exhausted all other options.”

In 2013, U-M psychiatrist Neera Ghaziuddin, M.D., co-edited a book published by Oxford University Press, on ECT in children and adolescents with contributions from a number of U-M ECT faculty. The first of its kind, it provides guidance on the use of the modern ECT technique in a subgroup of young people with severe psychiatric disorders.

Learn more about the UMHS ECT program at http://www.psych.med.umich.edu/ect

More about the Psychiatric Neuromodulation program is available at http://www.psych.med.umich.edu/neuromodulation/