ANN ARBOR, Mich. — They’ve taken many paths to get to this point, from 28 states, 60 undergraduate colleges. They’ve pursued educations in a wide range of fields, from biology and physics to political science, engineering and the arts. 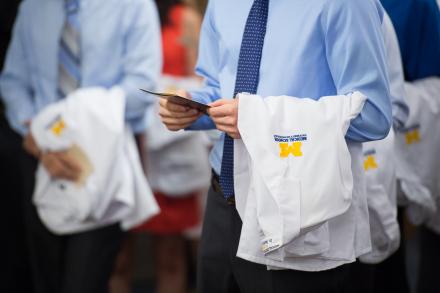 But now, their paths have merged, and they've become the 170th class of medical students to enter the University of Michigan Medical School.

In a ceremony at Hill Auditorium, the 172 aspiring physicians received their first white coats bearing the U-M logo, and their first stethoscopes, from the faculty who will lead their classes.

As they stepped from the stage, they started down the path laid by the school’s new curriculum – the first class to be fully immersed in it across all 4 years.

Not only will they learn the science and skills they need to become doctors, but they’ll gain immersive experience  working together with professionals from other health fields, and training in how to lead in a time of great change in health care.

They’ll also choose a path within a path, as the first class to have eight of the school’s new Paths of Excellence open to them. Each gives students a chance to immerse themselves in an area where they can have an impact while they are in medical school, in fields such as health policy, entrepreneurship, scientific discovery and bioethics.

The diverse class is 56 percent female and 16.3 percent from backgrounds traditionally underrepresented in medicine. The majority come to medical school after gaining experiences beyond college.

“This is an exceptional group, and we’re going to offer them an exceptional experience that takes full advantage of the changes we’ve made in recent years, all within our vibrant and supportive community,” says Rajesh Mangrulkar, M.D., associate dean for medical student education.

The community is brought together in the M-Home, a central part of the new curriculum. On the first day of medical school, students will take part in a “sorting ceremony” that may make them think they’ve been temporarily transported to the mythical Hogwarts School. Each student will find out which of four “houses” they’ll spend their medical school careers with, as a way of creating community, support, small-group learning, wellness, service and mentoring opportunities within the school.

The inaugural class of the M-Home named the houses last year, after legendary physicians with links to U-M:

The new incoming class will be immersed in the clinical care world of the U-M Health System from the beginning. They’ll develop an understanding of the immense importance of teamwork in the clinical setting while they engage in inter-professional education with students enrolled in U-M’s other health professions schools, including Nursing, Dentistry, Pharmacy, Public Health, Kinesiology and Social Work.

For more about the new curriculum, visit https://medicine.umich.edu/medschool/education/md-program/curriculum . 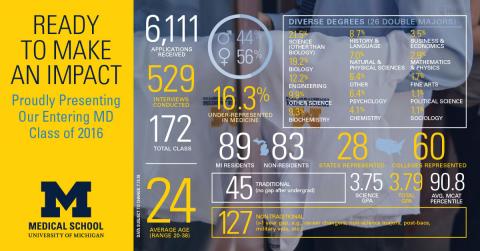 Watch the new class of students receive their white coats: