ANN ARBOR, Mich. — It happened fast. It happened in nearly every hospital in the state of Michigan. And it didn’t come with dreaded side effects.

“It” was a change in the type of patients treated by the state’s 130 hospitals – or rather, the insurance status of those patients.

A new study shows that the proportion of those patients who lacked insurance dropped by nearly 4 percentage points, and the proportion covered by Medicaid rose more than 6 points, within three months of the launch of the Healthy Michigan Plan in April 2014.

The plan enrolled hundreds of thousands of low-income Michiganders between the ages of 18 and 64 in Medicaid coverage under the Affordable Care Act.

The new findings, reported in JAMA by a team from the University of Michigan Institute for Healthcare Policy and Innovation, confirm directly what other studies have predicted or implied: That Medicaid expansion can help relieve hospitals’ burden of caring for patients who have little or no means to pay.

The researchers were also the first to look specifically at whether all hospitals across a Medicaid expansion state experienced the shift in insurance coverage for their patients.

They were surprised at how uniformly the shift in coverage occurred for hospitals across the state. In all, 94 percent of hospitals treated fewer uninsured patients, and 88 percent had more Medicaid-covered patients, in the last 9 months of 2014 compared with the same period in each of the two years before expansion.

But even as more patients had coverage that could pay for their care, hospitals didn’t see a sudden rise in the total number of non-elderly adult patients, the study finds.

In fact, the total number of hospitalizations in the year after the expansion was slightly lower than the average for the two years before expansion. Some had expressed worries about newly covered Michiganders flooding hospitals with ‘pent up demand’ for advanced care.

“This is evidence that broader availability of insurance coverage for residents of Michigan is translating into coverage at the time when people are most in need of it – namely, when they are sick enough to be in the hospital,” says Matthew M. Davis, M.D., MAPP, the lead author and a U-M professor of internal medicine, pediatrics, public policy and public health. “The Healthy Michigan Plan appears to be shifting the balance for almost all Michigan hospitals, to have a higher proportion of patients who have insurance coverage.” 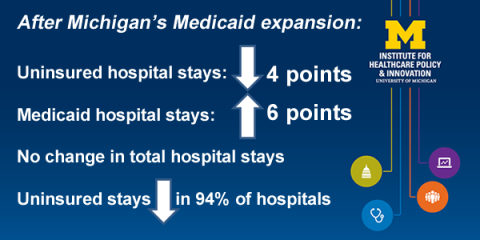 A snapshot of the impact of Healthy Michigan Plan Medicaid expansion on Michigan hospitals.

The data used in the study are from the Michigan Health and Hospital Association’s Michigan Inpatient Database, which includes data on all hospital stays no matter what the insurance status of the patient.

The data do not indicate whether Medicaid-covered hospital patients had traditional or Healthy Michigan Plan coverage, nor whether their condition was serious enough that it might have caused them to seek hospital-level care even if they didn’t have insurance. However, Davis notes that hospitals tend to have similar thresholds for admitting patients based on their condition.

Nineteen states have not expanded their Medicaid programs under the ACA. Findings from this study may add further information to debates in their state capitals.

Davis and the study’s senior author, IHPI director John Z. Ayanian, M.D., M.P.P., are also involved in a much larger IHPI-led, state-funded effort to evaluate the impact of Medicaid expansion in Michigan. The new study was not part of that evaluation, but further work by other IHPI researchers will probe the impact of Medicaid expansion on uncompensated care costs absorbed by Michigan hospitals.

The evaluation will also look at what being covered under the Healthy Michigan Plan means for the financial health of individuals, not just hospitals. Often, hospitals will attempt to bill uninsured patients for some or all of the cost of their care, and set up payment plans or other debt arrangements to try to recoup some of the cost.

“When uninsured individuals are so ill they need to be hospitalized, it poses financial risks to them as well as to the hospitals that they’re admitted to,” says Davis. “Medicaid expansion in 31 states and the District of Columbia has reduced that risk. Meanwhile, uninsured individuals in states that haven’t expanded the program continue to face that risk – as do the hospitals there.”

IHPI members are also looking at the effect of expansion on the mix of patients being seen in outpatient clinics and emergency departments around the state.

Last Friday, U-M researchers published data from the first year after expansion, showing that access to care went up, and wait times for initial primary care appointments around the state did not go up, for Medicaid patients, despite requirements under the plan that enrollees seek a primary care appointment soon after getting coverage.