Both yearly spending by people with diabetes, and cost per milliliter, up sharply – outpacing costs for other blood sugar medications

ANN ARBOR, Mich. — People with diabetes who rely on insulin have seen the cost of that drug triple in just a decade -- even as doctors have prescribed higher doses to drive down their blood sugar levels. 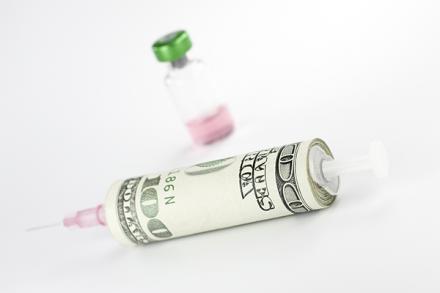 Meanwhile, the cost of other diabetes drugs has stayed about the same or even gone down.

Published today in the Journal of the American Medical Association, the findings estimate in constant dollars what patients and their insurance plans paid from 2002 to 2013 for all antihyperglycemics, or medicines that reduce blood sugar levels. 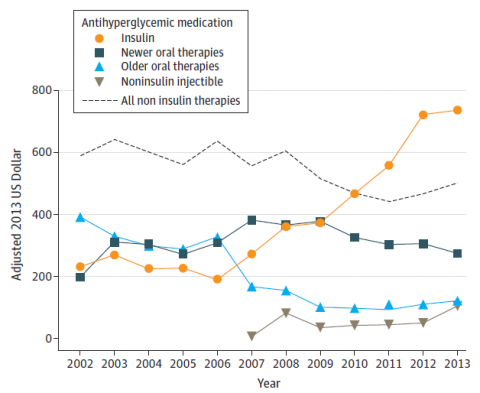 The cost of insulin has shot up, while other blood sugar medication costs have not. All costs are in constant 2013 dollars.

The authors of the study say the rise in insulin compared with other therapies means it’s time to look again at the effect, and the cost-effectiveness, of non-insulin therapies. They also note that the price of insulin is not likely to drop because of competition from generic forms, because of the way it is regulated. 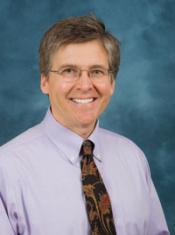 “In the United States, the more than 3-fold increase in the cost of insulin over the past decade is alarming.  It is a burden to both patients and payers and may deny some people access to a lifesaving therapy,” says William Herman, M.D., MPH, the Michigan co-author and a longtime diabetes care researcher. “Although the newer, more expensive insulin analogs appear to have incremental benefits compared to older, less expensive insulin preparations, their premium price requires us to ask whether they are really necessary, and if so, for whom?”

Herman, a professor of internal medicine at the Medical School and of epidemiology at the School of Public Health, is a member of the U-M Institute for Healthcare Policy and Innovation.

“What our study shows is how quickly things can change and why there is a need to focus on the costs as well as the benefits when deciding treatment options for people with diabetes,” says Philip Clarke, Ph.D., the study’s senior author and a professor in Melbourne’s School of Population and Global Health and Centre for Health Policy.

Insulin injections keep people with Type 1 diabetes alive, and they take multiple daily injections often starting in childhood. In adults with advanced Type 2 diabetes, doctors prescribe it to control blood sugar and stave off devastating damage throughout the body – usually after diet and exercise, and other medications, have failed to reduce blood sugar levels enough.

And in the same period, the average annual usage went from 171 mL to 206 mL, as prescribed doses went up. This likely happened due to increasing overweight and obesity, which increase the amount of insulin needed by a person, as well as new national recommendations that stress lower sugar levels for all people with diabetes.

Meanwhile, the per-person spending on all other blood sugar medications was $502 in 2013, down from about $600 in 2002 in constant dollars. The cost of these medications combined dropped over the first nine years, bottomed out in 2011 and rose slightly since then.

The cost of metformin, which is available as a generic drug, plummeted from $1.24 per tablet in 2002 to just 31 cents in 2013. Even the newer class of drugs known as DPP4 inhibitors only got 34 percent more expensive since they hit the market in 2006.

The researchers analyzed data from nearly 28,000 people who received treatment for diabetes in the 11-year period, a time when diabetes was rising steadily. The average age was around 60.

About one in four of the participants used insulin to control their blood sugar, and two-thirds were taking an oral medication. In the latter part of the study period, a small percentage began taking new injectable drugs designed to complement oral drug use.

The researchers could not separate out users of synthetic human insulin, the least expensive form currently available, from those who use the more recently introduced “analog” forms that act more slowly or quickly in the body depending on the desired effect. They also didn’t have data on what insulin users spent on the needles and other devices used to inject insulin, except when that cost was included in drug costs, such as for pre-filled insulin pens.

And, they didn’t have information on which oral medication users took generic forms, which are less expensive. But they note that prices of oral medications are likely to drop over time as generics become available, while the fact that insulin is regulated as a biologic medication by the Food and Drug Administration means that prices won’t likely drop as generic competitors enter the market and encounter the strict rules governing biologics.

Further research using data that includes these details could further enhance understanding of how costs have changed for people with diabetes over the years.

The study was supported by grants from the U.S. National Institutes of Health (DK090435) and the Australian National Health and Medical Research Council (1028335 and 1079621).