ANN ARBOR, Mich. — An internationally-recognized head and neck cancer researcher and faculty leader with a proven track record in promoting diversity was named today as the new executive vice dean for academic affairs for the U-M Medical School. 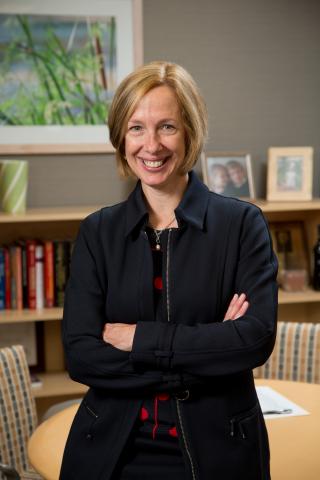 The U-M Board of Regents today appointed Carol R. Bradford, M.D., to the new position that will focus on the educational mission and continue to ensure the U-M Medical School provides excellent training and mentoring for students, residents and fellows.

In the new role, Bradford will lead a multi-year education plan, manage and develop the Medical School administrative budget, represent the Medical School with key constituents and assist Runge in recruitment and oversight of the chairs of clinical departments.

“Dr. Bradford has been an outstanding leader here at U-M, and I’m thrilled to have her on my leadership team,” said Runge.

“Her research into the treatment of head and neck cancer has brought her international recognition and here at U-M, she leads a department committed to diversifying our faculty. She has been remarkably successful in recruiting tremendous faculty members who are extraordinary educators, talented clinicians, insightful researchers and future leaders of the field.

“She will be a key part of keeping our Health System and Medical School on the frontier of medical innovation in health care and education.”

Bradford has served since 2009 as the chair of the Department of Otolaryngology-Head and Neck surgery and is also the Charles J. Krause, M.D., collegiate professor of otolaryngology.

The oldest medical specialty in the U.S., otolaryngology deals with disorders of the ear, nose and throat, which include the head and neck.

Under her leadership, the department’s faculty has grown from 40 to 55 faculty members, and Bradford has championed recruitment of women and people of color to both the faculty and residency program. An avid supporter of team leadership, Bradford also implemented an expanded leadership structure that reflects the health system’s mission areas of education, clinical care and research.

The University of Michigan's Otolaryngology Residency Program is ranked the nation’s top otolaryngology training program among public institutions, according to the Doximity Residency Navigator.

Bradford earned three degrees at U-M: her bachelor’s degree in cellular and molecular biology, her M.D. and a master’s degree in microbiology/immunology. She completed her residency training in otolaryngology-head and neck surgery at U-M, which included an 18-month research fellowship.

“I have been a part of the U-M community for my entire career, so I welcome this opportunity to help lead our educational mission,” says Bradford. “We have such an important task: preparing the next generation of physicians who will influence health care globally. I expect many challenges, but also many rewards.”

Bradford specializes in head and neck cancer surgery, focusing her research on identifying and evaluating biomarkers that can predict outcomes. She works to develop therapies to combat certain types of head and neck cancer that are resistant to traditional forms of treatment.  She also pioneered the use of sentinel lymph node biopsy as a safe and reliable tool to stage patients with melanoma of the head and neck. She has published nearly 250 peer-reviewed articles.

Bradford also was elected as the first woman president of the American Head and Neck Society in 2012 and received the 2009 Physician of the Year Award from Castle Connolly for Clinical Excellence.  In 2015, she was inducted into the prestigious Institute of Medicine (National Academy of Medicine).  She presently serves on the Board of Directors of the American Academy of Otolaryngology-Head and Neck Surgery and as President of the Society of University Otolaryngologists. She currently chairs the Clinical Practice Committee of the University of Michigan Medical Group.

The University plans to name an interim chair to replace Bradford by July 1 and later convene a search committee for a permanent replacement.