ANN ARBOR, Mich. — Dominic Pangborn’s artwork is always changing. He’s fearless in his approach, which is never the same twice. Over his decades-long career, the designer has received many awards and recognitions, and his signature ties are ubiquitous in the Detroit business community. 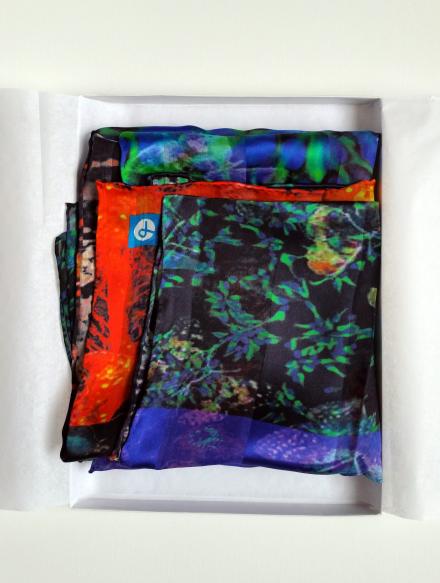 Not for the wallflower, his ties, like all his designs, combine bold patterns and beautiful colors that are aesthetically pleasing and serve as statement pieces that make the wearer stand out.

Now, Pangborn is making a statement about research on mental health. He has designed a new scarf and tie based on images generated by University of Michigan scientists. Those who add it to their wardrobe will be helping that science move ahead.

“One of my greatest joys is to ‘pay it forward’ and give back to the community,” said Pangborn.

Released just in time for May, National Mental Health Awareness Month, Pangborn’s creations are in partnership with the Heinz C. Prechter Bipolar Research Fund. The silk scarves and ties bear images of neural stem cells generated in Prechter-funded research, together with the hopeful shapes of butterflies.

The Prechter Bipolar Research Program, part of the University of Michigan Depression Center, includes research into the basic mechanisms underlying bipolar disorder. Its scientists generate stem cells from skin cells donated by people with the illness, and those without, and then grow the kinds of neural cells found in the brain.

This process allows scientists to understand — in the laboratory — what’s different between the two kinds of cells, at the genetic and molecular level. Scientists can manipulate these ‘brain cells in a dish’ to test different medications. 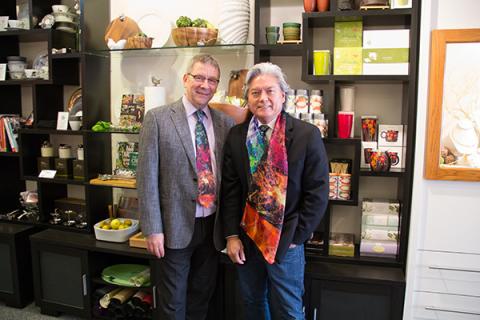 Dr. Melvin McInnis, left, and Dominic Pangborn model the tie and scarf in the Pangborn Design Store in Ann Arbor.

“The scientists at the University of Michigan Center for Pluripotent Stem Cell Research monitor the cells daily and have learned that cells taken from bipolar patients fire more intensively and in a way that is significantly different than cells from an individual who doesn't have bipolar disorder," said Melvin McInnis, M.D., the Prechter Fund research director. "By understanding the causes of bipolar disorder, we will be able to develop new treatments for the illness and most importantly, we’ll be able to prevent destructive mood episodes. Our ultimate goal is to allow people to live happy, normal lives.”

The stem cell center, headed by Sue O’Shea, Ph.D., is based in the U-M Medical School’s Department of Cell and Developmental Biology.

Bipolar disorder is an illness that affects millions of Americans and is marked by the highs of mania and the lows of depression. Also known as manic-depressive illness, the disorder causes shifts in mood, energy and activity levels, making day-to-day tasks difficult and sometimes impossible. The illness is marked by a high suicide rate and impacts the whole family.

The Prechter Fund scarf and tie project aims to call attention to research being done in this area of mental illness – research that is vitally necessary. 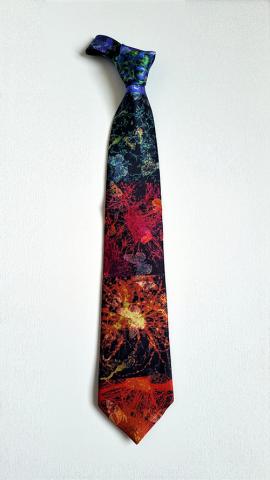 Dominic Pangborn believes that art should reflect a current mood, expression, and point in time. “I decided to add butterflies to the design because they signify metamorphosis. Our society is finally at a point where mental illness is openly talked about and research is taking a turn for the better,” he says.

The Pangborn Collection store at 335 S. Main Street in Ann Arbor, and the Pangborn Collection web store at pangborncollection.com, will sell the special edition of scarves and ties for the Prechter Fund, priced at $95.00. All net proceeds will go directly to Prechter bipolar research projects at the University of Michigan Depression Center.