What should U-M medical researchers study next? You can help decide

ANN ARBOR, Mich. — If you wish scientists would figure out a solution for a medical problem you face, or find answers for a loved one who struggles with a health condition, here’s your chance.

WellSpringboard is a crowdsourcing and crowdfunding platform for U-M health research.

The University of Michigan wants your ideas for what its medical researchers should study. You can also lend your voice to ideas suggested by other members of the public, and help them gain steam.

And once a U-M researcher agrees to take up the idea and run with it, you can help make the research happen by donating online or volunteering to take part. U-M will even kick in funds for the hottest ideas.

This week, U-M launched WellSpringboard.org as a crowdsourcing and crowdfunding platform for medical research at the U-M Health System.

They’re especially seeking ideas for studying how medical care affects patients now, and how to improve care. Every penny raised will go to U-M research.

Ready – for YOUR ideas

The site welcomes any idea, but is starting with a special focus on five areas:

“We know that the general public, and especially patients and their families, can be a great source of inspiration and support for our researchers,” says Matthew M. Davis, M.D., MAPP, the U-M physician and health researcher who leads the team that helped WellSpringboard get off the ground. “This platform provides a new, exciting way to make that happen.”

Davis worked with a team at the Michigan Institute for Clinical & Health Research, and the U-M Medical School, to develop the platform. The WellSpringboard idea received national awards from the federal Patient-Centered Outcomes Research Institute in its concept stage. Now, with support from MICHR, WellSpringboard is fully developed and ready to go.

Already, several patients have contributed videos and short statements calling for research on topics they care about. On the website, people can vote for ideas they think should be a focus of research.

U-M researchers often get their study ideas from what they see when treating patients, since many are also doctors at the U-M Health System or work with doctors, Davis notes. But getting ideas – and donations of all sizes -- from patients, families and the general public may mean even greater insights into what patients really want researchers to solve. 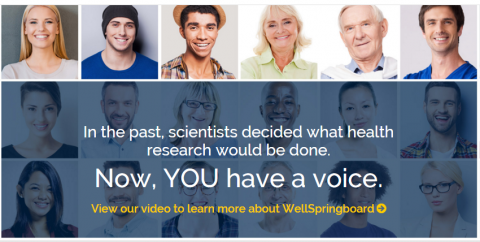 How WellSpringboard  works – in 9 easy steps:

1. Ideas Wanted: Anyone can submit an idea to WellSpringboard, and post a brief video about why the research is needed and why people should vote for or donate to it. A video taken by a smartphone is fine.

2. Support Ideas: Once it’s up on the site’s “Idea Well,” each idea can gather votes from the public. Each idea that reaches a target number of votes will be eligible for extra research funding from U-M.

3. Find a Research Connection: The WellSpringboard team will seek out U-M researchers who study topics related to submitted ideas, and ask if they’d be willing to study the topic.

4. Researchers Step Up: Then, interested researchers can post their own video to go with the one from the public, to explain what they would do if they could get funding. These “matched” ideas and research projects will go on the crowdfunding part of WellSpringboard, and start attracting donations toward a fundraising goal.

5. Crowdfunding: Anyone can donate to a matched idea and project, in any amount, via a secure online form. The site also makes it easy to spread the word through social networks about the chance to support exciting ideas.

6. On the Clock: Each matched idea will have just 30 days to reach its fundraising goal. Bonus support will flow to an idea that reaches certain targets for public donations. Donations are tax-deductible and there are no fees or cuts for administrative costs.

7. Achieving the Goal: If an idea matched with a project reaches its donation goal in time, then the U-M researcher will receive the money raised in order to carry out the project.

8. Keeping the Public Informed: Researchers will post updates on the site about how the work is going.

“We hope that the innovative combination of crowdsourcing research ideas, and crowdfunding the ones that researchers agree to study, will prove successful and be a model for other academic medical centers and research institutes,” Davis says. He is a professor of pediatrics and internal medicine at the U-M Medical School, and a member of the U-M School of Public Health, Ford School of Public Policy and Institute for Healthcare Policy and Innovation.

Visit www.wellspringboard.org to submit an idea, vote for one, or donate.