ANN ARBOR, Mich. — If you want to harness the full power of stem cells, all you might need is an eraser. 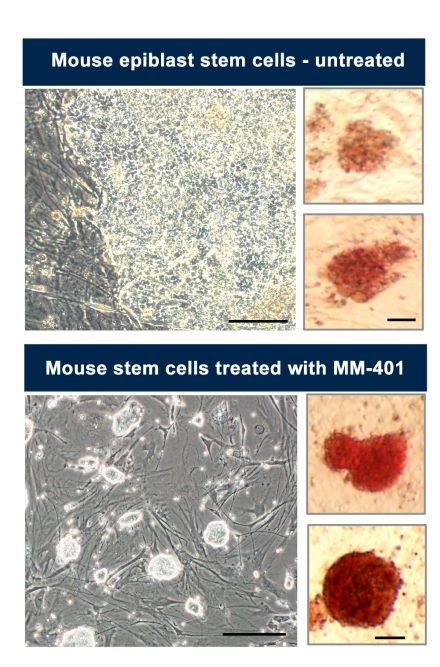 The epiblast stem cells on top have begun to differentiate, but when treated with the drug, they revert to an 'embryonic'-like state, as seen at bottom.

Not an ordinary eraser, of course. More of a drug, really. But if you use it right, it can erase the tiny labels that tell cells where to start reading important chapters in DNA, their inner instruction manual.

And if they can’t read that manual, the cells regain their full stem cell power – the power to become any kind of cell in the body.

In a surprising new finding, University of Michigan Medical School scientists have shown that a drug developed at U-M can achieve this – at least in mice.

It’s the first time that scientists have shown they can get stem cells to revert to their original state by erasing specific labels called epigenetic markers. The drug specifically targets markers on histones, the protein “spools” that DNA coils around to create structures called chromatin.

Writing in the journal Cell Stem Cell, the team reports that more than half of mouse epiblast stem cells treated with the drug reversed course within three days, and regained an embryonic “be anything” state, also called pluripotency.

In addition to generating pluripotent stem cells, the team showed that mice bred using the cells grew up healthy. 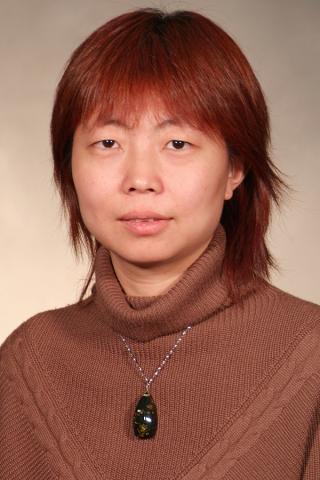 “We’ve demonstrated that we don’t have to manipulate the pluripotent genes to get to the ground state, but rather that we can block all other options of where the cell ‘wants’ to go. Then the only option is going back to the ground, or naïve, pluripotent state,” says Yali Dou, Ph.D., senior author of the new paper and an associate professor of pathology and biological chemistry at U-M.

The researchers used a relatively new compound called MM-401, which U-M scientists originally designed for use in treating leukemia. Now, they’re working to see if the MM-401 eraser technique works with human stem cells that bear some resemblance to mouse epiblast stem cells. They will share the drug with any other researchers who want to try the technique.

However, it’s far too early to see the approach as a way to avoid the use of human embryos for research or potential treatments. Currently, embryos left over from infertility treatments are the only source of human embryonic stem cells.

Other techniques can reprogram “adult” cells in the human body taken from skin, for example – but the cells still carry baggage from their previous state.

Still, the new achievement shows the power of altering the epigenetic labels that dot the chromatin packaging, without altering the DNA itself. Past attempts by other teams to restore pluripotency to mouse cells from the epiblast stem cell state have yielded far lower amounts, or non-viable cells. And, they’ve required cocktails of multiple drugs, given over the long term, to achieve it.

The U-M team shows that using MM-401 for just a few days, and then stopping its use, is enough.

The first author of the new paper is Hui Zhang, Ph.D., a postdoctoral fellow in Dou’s laboratory.

Epigenetic labels signal to the cell’s DNA-reading machinery where they should start uncoiling a chromosome in order to read it. The U-M-developed drug targets the labels that come from the activity of a gene called MLL1.

MLL1 plays a key role in the uncontrolled explosion of white blood cells that’s the hallmark of leukemia, which is why U-M researchers originally developed MM-401 to interfere with it. But it also plays a much more mundane role in regular cell development, and the formation of blood cells and the cells that form the spinal cord in later-stage embryos.

It does this by placing tiny tags -- called methyl groups -- on histones. Without those labels, the cell’s DNA-reading machinery doesn’t know where to start reading. It’s as if the invitation to open the instruction manual had vanished.

Stem cells don’t harness the power of MLL1 until they’re older. So using MM-401 to block MLL1’s normal activity in cells that had started down the path to adulthood meant that histone marks were missing before the cell needed them. The cells couldn’t continue on their journey to becoming different types of cells. But they could still function as healthy pluripotent stem cells.

“People have been focused on other epigenetic changes that are more dramatic, but ignored methylation by the MLL family,” says Dou. “Deleting MLL1 entirely causes failure later in differentiation. But inhibiting it with a drug temporarily leaves no trace behind.” 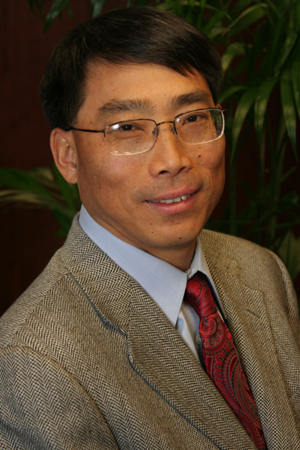 The U-M team that designed MM-401 is led by co-author Shaomeng Wang, Ph.D., the Warner-Lambert/Parke-Davis Professor at the Medical School who holds appointments in internal medicine and pharmacology, as well as an appointment in the U-M College of Pharmacy.

The team also included Sundeep Kalantry, Ph.D., an assistant professor of human genetics at U-M who showed that female stem cells treated with MM-401 had un-silenced one of their X chromosomes. This step is crucial for showing that cells have returned to true pluripotency.

Alexey Nesvizhskii, Ph.D., and his colleagues in Pathology and Computational Medicine and Bioinformatics contributed important analysis to show how changes in MLL1 expression affects other gene expression in cells.