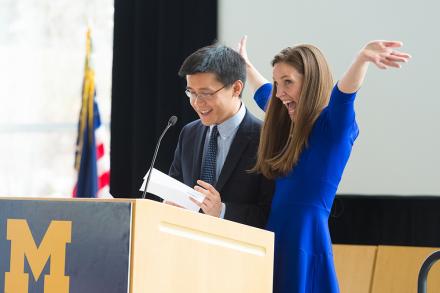 Some couples - like this one - succeed in matching to residency programs in the same city.

Or rather, they found out where they’ll go for their next round of training, after they graduate in two months.

As part of a massive national ritual called Match Day, they and their fellow near-doctors learned which residency program they’ve “matched” to. That’s where they’ll spend the next three to seven years of their lives training to learn a particular specialty and prepare to practice on their own.

More than 500 friends, family and professors joined the U-M Medical School students in celebrating their matches, in a gathering at U-M’s North Campus Research Complex.

Each graduating medical student around the country enters the matching process by ranking the locations where they’d most like to train for their chosen specialty.  The residency programs rank the students they’d most like to take. Then, an elaborate computer-based system puts it all together to make the best matches.

Learn more about the process here.

U-M’s gathering gives some students the chance to open their envelopes on stage and share their moment of surprise with the entire class. All students can announce their destination from the stage, and place a pin on a map of the U.S. They also receive a gift from the U-M Medical Center Alumni Society, whose ranks they’ll join soon.

This year, the event happened in the same week that the U-M Medical School was ranked 11th among U.S. research-oriented medical schools and 4th for primary care schools by U.S. News & World Report.

According to the U.S. News results, U-M also ranks very high in the estimation of residency program directors – senior doctors at teaching hospitals nationwide who interview and select graduating medical students to enter their programs.

Here are some highlights of this year’s match:

See and download photos from the U-M Match Day celebration

For more about Match Day this year and in past years at U-M, see http://umhealth.me/UMmatchday