Pregnancy and PTSD: Surprising findings could help moms-to-be at risk

ANN ARBOR, Mich. — For most women, expecting a baby brings intense joy --and a fair amount of worry. 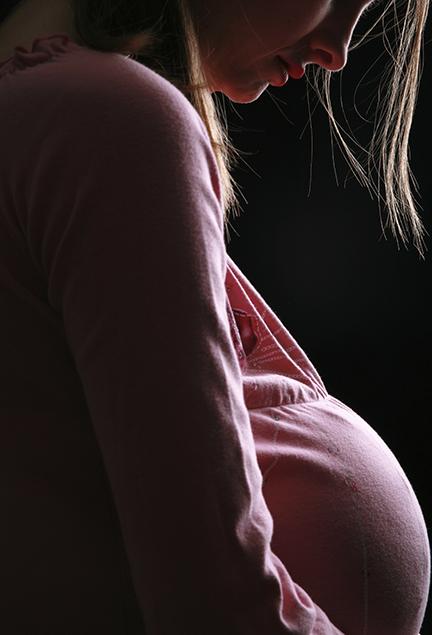 But what about women who have lived through something awful enough to cause post-traumatic stress disorder?

Contrary to what researchers expected, a new study shows that pregnancy may actually reduce their PTSD symptoms. Or at the least, it won’t cause a flare-up.

The news isn’t all good, though.

For about one in four women with PTSD, the opposite is true, the researchers find. Not only do their symptoms get worse as their pregnancy goes on, but their ability to bond with their newborn suffers, and they face a high risk of post-partum depression.

The findings, made by a University of Michigan Medical School and School of Nursing team, highlight the need to screen pregnant women for possible undiagnosed PTSD.

The study, published in the journal Depression and Anxiety, is the first to track symptoms in women with PTSD through pregnancy and after giving birth.

More than half of the 319 women in the study had high PTSD symptoms in the first part of pregnancy – and all members of this group experienced a decrease as they got closer to giving birth. Women who had low levels of symptoms early on stayed about the same.

But for some, PTSD got worse as pregnancy went on. Those who suffered a new stress or trauma during pregnancy, or who had the most anxiety about giving birth, had the worst experience with PTSD symptoms during pregnancy, and post-birth problems.

“We hope our results give a message of hope that women who have a past diagnosis of PTSD aren’t all headed for a worsening while they’re pregnant,” says Maria Muzik, M.D., M.S., the U-M psychiatrist who led the study. “But we also have highlighted a vulnerable group that has a heightened risk of worsening symptom and postnatal issues that could have lasting effects for both mother and child.”

Many women at risk of undiagnosed PTSD

Muzik notes that PTSD can be caused by many things – such as combat, car crashes, being robbed or raped, living through a natural disaster or house fire, or being the victim of abuse in childhood or adulthood. With so many possible causes, many women may not have had a formal diagnosis of PTSD before their pregnancy, but may be suffering lasting effects from their trauma.

So, the researchers cast a wide net to find the women for their study. Funded by the National Institutes of Health, the original study was called the STACY Project for Stress, Trauma, Anxiety, and the Childbearing Year, and headed up by Julia Seng, PHD, CNM, FAAN, a professor in the U-M School of Nursing.

Nurses at prenatal clinics run by three academic health centers, including ones that served mostly women who rely on public insurance, invited thousands of women to participate in the larger STACY study. The new data come from the subset of women who met the formal diagnostic criteria for PTSD either at the time of their pregnancy or in their past, based on detailed interviews using standard measures. 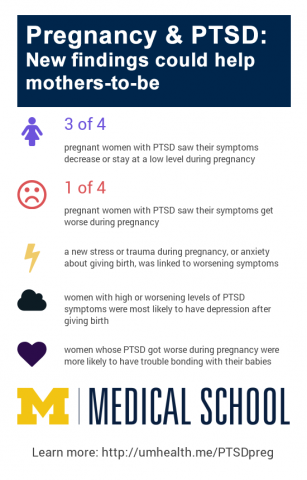 The team interviewed the women at two points during their pregnancy, and were able to interview about half the women again in the first six weeks of motherhood.

Women with the strongest social support networks during pregnancy appeared to be protected from the risk of worsening PTSD. That means that partners, relatives and friends can make a real difference for a pregnant woman.

Muzik heads the Women and Infants Mental Health Program in the U-M Department of Psychiatry, which serves women experiencing mood and trauma-related issues during and after pregnancy.

She hopes that the new results will encourage providers who care for pregnant women to make PTSD screening part of their regular prenatal care. “With a few questions and screening measures, they can identify women who are experiencing risk factors, and heighten their awareness for support and treatment,” she says. “Preventing the worsening of symptoms could reduce their chance of post-birth illness, and protect their future child from the lasting ill effects that a mother’s mental illness can have.”