ANN ARBOR -- An international team of scientists that includes researchers from the University of Michigan has identified 16 new genetic variations for age-related macular degeneration (AMD). 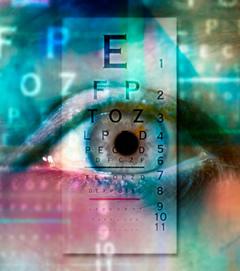 Their findings nearly double the number of regions, or loci, associated with the disease.

The International AMD Genomics Consortium with its 26 participating institutions also confirmed several previously reported AMD risk genes in the study involving 43,000 people. With its large sample size and high density of genetic variants, the study was able to prioritize candidate variants within identified risk loci, which in turn will help to plan more efficient follow-up experiments.

Furthermore, the study detected an enrichment of very rare protein coding variants in AMD cases within three of the known AMD risk genes, CFH, CFI and TIMP3. With observed frequencies in controls below 0.1 percent and strong risk effects, these findings indicate that there exist very personal situations that noticeably can shift the risk of developing the disease.

The research brings to 52 the number of identified common and rare variants associated with the disease that causes vision loss in people 50 and older. Together these could explain up to 60 percent of the inherited genetic risk for the disease.

The consortium's findings are reported today in Nature Genetics.

The study's lead author, Lars Fritsche, research investigator in the U-M School of Public Health Center for Statistical Genetics, said the large size of the sample along with advancements in genotyping technology allowed the study team to dissect the combined contributions of common and rare variants.

“Often, we have common variant associations and don’t know exactly why they are associated with disease, but with these rare variant associations we have observed protein coding changes that could have direct functional consequences,” Fritsche said, adding that the consortium’s finding of these rare variants at such low frequencies points to the need for even larger studies, and for genome sequencing rather than genotyping.

“Our results also emphasize that we need to continue to work together to have the statistical and analytical power to find interesting rare variants that can point us to the disease mechanism itself,” he said.

AMD is a neurodegenerative disease that is estimated to affect 30 million to 50 million people globally, and growing. It involves a loss of sight in the center of the visual field, caused by damage to the retina. It comes in two forms, geographic atrophy or “dry” AMD, and neovascular “wet” AMD.

In this study, researchers also identified the first variant solely for “wet” AMD, which they say may explain why current therapies for this form don’t work for everyone. Other variants have been associated with both forms of the disease.

"Understanding the genetic basis for AMD is an essential first step in moving forward with developing future treatments and preventions for this condition,” said Kari Branham, assistant research scientist in the U-M Medical School, and coordinator of the Kellogg Eye Center AMD Family Studies Core.

“In 1998, the Kellogg Eye Center began collecting samples for AMD genetic studies and has now collected more than 2,600 samples from affected individuals, unaffected controls, and families with AMD,” Branham said. “Our group contributed 1,456 samples to the analysis. We are excited to have been a part of this significant international endeavor. The project is truly a testament to the power of scientific collaboration.”

Supported by the National Eye Institute (NEI), part of the National Institutes of Health, the study included about 23,000 participants with AMD and 20,000 without the disease. Researchers analyzed DNA samples from both groups, surveying most of the genome but also focusing on distinct loci already known or suspected to be associated with AMD.

Next, they compared participant DNA to data from the 1000 Genomes project, yielding more than 12 million genetic variants of potential interest. Finally, they went back to the participant DNA samples, looking at all 12 million variants, to see if any were found more or less often in people with AMD than those without it.

“With the identification of major genetic variants in AMD, it will be possible to investigate how the expression of these genes interact with the known aging genes, changes in the retinal mitochondrial genome, and expression of genes from the telomere region (tips of chromosomes), which are known to change with the aging process,” said John Heckenlively, M.D., the Paul R. Lichter Professor of Ophthalmic Genetics at the Kellogg Eye Center at the U-M Medical School.