ANN ARBOR, Mich. – If you think caring for severely injured patients is hard work, imagine doing it 2,000 feet above the ground and at 175 miles per hour. And if that doesn’t sound bad enough, perform all of those same caring techniques in front of hundreds of fellow medical professionals, video crews, and of course, judges. 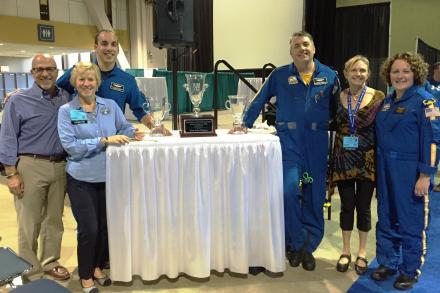 The competition invites some of the top air medical services on the continent to participate in realistic emergency situations that test the skills and knowledge of each flight crew.

The competition begins with 10 teams of two flight nurses from the top air medical service programs across North America. The teams perform patient care scenarios for both a pediatric patient and an adult patient, and are scored based on their performances. The four top scoring teams move on to the final patient scenario, with the champions taking home the grand prize AAMS SIM Cup. 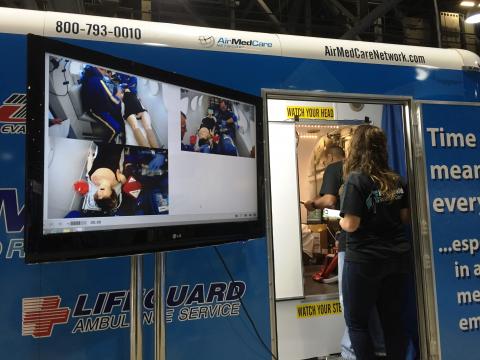 U-M Survival Flight nurses Chad Stoller and Jeff Thomas
are shown on the screen assisting a mock patient inside
the trailer. The trailer was set up to simulate the inside
of a fixed-wing aircraft.

“These sound like crazy, off-the-wall, scenarios,” Stoller says. “But some of these things could definitely happen, and we have to be prepared to handle anything.”

Advanced mannequins are used to simulate actual patients. But, don’t think these are just your average dummies. The mannequins have vital signs, symptoms and sounds, and act and react very similar to a live human being. 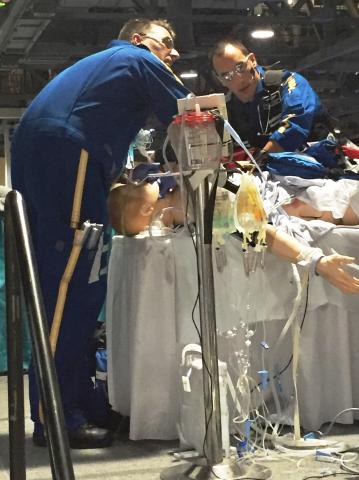 U-M Survival Flight nurses Jeff Thomas and Chad Stoller
have to narrate each of their lifesaving actions as they
care for the mock patient.

In addition, the participants have to narrate each of their lifesaving actions as they work, including diagnoses, treatments, and explaining their evaluation and decision processes.

This back-to-back win for Stoller and Thomas is the sixth international title for the Survival Flight team in the 13 years the competition has been held.

“We’re incredibly proud of our team and the strong performance they show each year at this competition,” says Survival Flight medical director, Mark J. Lowell, M.D., of the U-M Medical School’s Department of Emergency Medicine.

“The real value is in the preparation, as it is truly a team effort. Both their Survival Flight colleagues and physicians from other departments assist by practicing scenarios with them in the weeks and months leading up to the competition. The Cup is a testament to everyone’s hard work.”

Stoller and Thomas both mention studying and training are important for succeeding in this vigorous competition, as well as having the support of their colleagues and mentors.

“Dr. Lowell is instrumental in our training,” Stoller says. “We’re all competitive, but he sees the real educational component to this competition.”

Thomas agrees, “He comes in on his nights off to help us train.”

Seeing as Survival Flight had nearly 1,300 missions this past year, Stoller and Thomas had plenty of real-life scenarios to keep them busy before this year’s competition.

“This competition provides us with opportunities to learn how to better care for patients,” Thomas says. “The whole experience helps us be the best we can be in our line of work.”

“While this competition only lasts a couple of days, our crews are constantly performing these same lifesaving actions on a daily basis for our most critically ill and injured patients,” Lowell says.

To learn more about Survival Flight, visit their website.