ANN ARBOR, Mich. — Can any cancer cell form another tumor, or is it only select cancer stem cells that give rise to new cancer cells? The answer, a new study finds, is both. 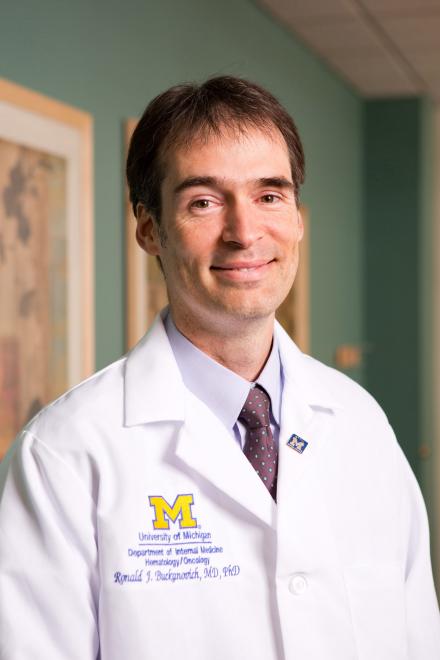 But in rare exceptions, the daughter cells gave rise to the stem-like grandmother cells.

The question of whether cancer cells divide in a patterned fashion or randomly has been hotly debated.

“Like any nature/nurture question, the answer is always both. In general we observed that cancer cells do not divide randomly. Just like in normal biology, we saw the pattern of stem cells giving rise to daughter cells. But within that hierarchy, we saw rare exceptions that went against the hierarchy,” says senior study author Ronald J. Buckanovich, M.D., Ph.D., associate professor of internal medicine at the University of Michigan Medical School.

“This is very significant for how you design cancer therapies. These stem-like cells are the really critical therapeutic targets, but the non-stem cells need to be addressed as well,” he adds.

“BMP2 tells the cancer to make more grandmothers and stop making granddaughters. So there are fewer bulk cells. But there are more of the aggressive, chemotherapy-resistant cells that have the ability to create new tumors,” Buckanovich says.

When the researcher blocked BMP2, it reduced the ability of the cancer cells to make new stem cells. But blocking BMP2 promotes the growth of the granddaughter bulk cells. The challenge is to target the BMP2 inhibitor to the cancer stem cells only. This type of treatment is not currently available to patients. Researchers are examining ways to deliver an inhibitor only to the stem cells.

The study, which is published in Proceedings of the National Academy of Sciences, is unique because it looked at human tissue, rather than mouse models. The cancer researchers tapped into a microfluidic device designed by Euisik Yoon’s group at the University of Michigan College of Engineering. The device enabled the cells to be separated and studied individually over time in a manner that would not be possible with traditional methods.

“We could watch cancer cells divide in real time, actually track and watch who’s the mother and who’s the daughter,” Buckanovich says. “This device allowed us to study human cells instead of mouse models. We believe it is the first instance to define a cancer hierarchy using cells from patients.”