ANN ARBOR, Mich. — Deep within your DNA, a tiny parasite lurks, waiting to pounce from its perch and land in the middle of an unsuspecting healthy gene. If it succeeds, it can make you sick. 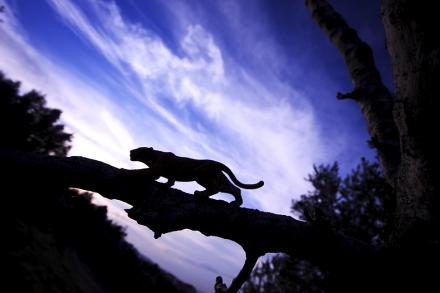 Like a jungle cat, this parasite sports a long tail. But until now little was known about what role that tail plays in this dangerous jumping.

Today, scientists report that without a tail, this parasitic gene can’t jump efficiently. The findings could help lead to new strategies for inhibiting the movement of the parasite, called a LINE-1 retrotransposon.

The research, published in Molecular Cell by a team from the University of Michigan Medical School and the Howard Hughes Medical Institute, answers a key question about how “jumping genes” move to new DNA locations.

The parasite in question isn’t a foreign beast, but rather a piece of DNA that carries its own instructions for making a piece of “rogue” genetic material and two proteins that can help it jump. “Jumping” allows this rogue copy to land anywhere in the DNA of a cell, causing a change called a mutation.

Jumping LINE-1s – and other genetic parasites like it – are responsible for about one in every 250 disease producing mutations in humans. They’ve been blamed for causing a number of diseases, including hemophilia, Duchenne muscular dystrophy, and cancer. Copies of this parasite litter our DNA, though most of them can no longer jump and cause damage.

For these reasons, scientists want to understand as much as possible about how this process works. Perhaps someday, this new understanding could help fight the effects of these jumps – or prevent the parasites from leaping in the first place.

“Now, we have a mechanism to explain how sequences that comprise one-third of our genome have moved,” says John Moran, Ph.D., senior author of the new paper and a longtime U-M and HHMI researcher studying jumping genes. “By understanding how LINE-1 jumps, we can understand how it contributes to disease.” 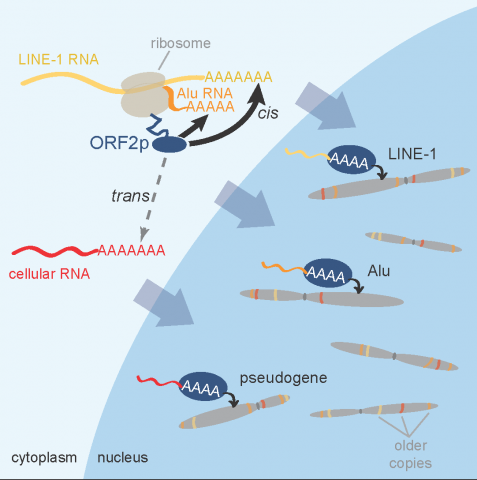 The scientists' work helpes explain how LINE-1 "parasite" genes can jump - and also suggests that other "parasites" harness the LINE-1 process to jump as well.

The gene that’s responsible for LINE-1 jumping does its damage by first creating an RNA copy of itself. That RNA copy tells the cell to make two proteins that help make it possible for the LINE-1 RNA itself to jump into a new spot.

Each copy of LINE-1 RNA has a long tail at its end that’s made up of multiple copies of a substance called adenosine. Known as a “poly(A) tail”, it’s long been suspected of playing a role in LINE-1 jumping. But it was impossible to figure this role out by removing the tail, because the tail also serves a key function in getting the RNA to the location where proteins are made.

Like the Cheshire Cat of Alice in Wonderland, if the tail vanished, the rest of the “cat” would too.

So, a postdoctoral fellow, Aurélien Doucet, Ph.D., now a research associate at the Institute for Research on Cancer and Aging in Nice, or CNRS, in France, collaborated with Jeremy Wilusz, Ph.D., now an assistant professor at the University of Pennsylvania Perelman School of Medicine, to figure out a way to delete the LINE-1 poly(A) tail to determine if it affected LINE-1 jumping.

They succeeded in making a LINE-1 RNA, without a poly(A) tail, that got where it needed to in the cell to make proteins.

The substitute tail allowed the scientists to see what happened when LINE-1 RNA could get to the protein-making spot, but without its usual appendage.

Here’s where it gets interesting. Without the poly(A) tail, almost no jumping happened – because the tailless LINE-1 RNA couldn’t interact well with a protein called ORF2p.

ORF2p is actually one of the two proteins that the LINE-1 RNA tells the cell to make. Once ORF2p binds to the RNA’s tail, it sets in motion the steps needed for a jump to occur.

Moran compares it to a Lego set – where one kind of tail could get unplugged and another slotted in to serve some, but not all, of the same functions.

In other words, the LINE-1 parasite is especially crafty.

A parasite of a parasite?

LINE-1 also has a competitor parasite, called Alu. And when LINE-1 RNA lacked the tail and couldn’t jump, Alu RNA did much better at jumping.

Alu RNA also sports a poly(A) sequence at its end, which has already been shown to be vital to its ability to jump. But the Alu RNA doesn’t contain the instructions for making a protein. This suggests, says Moran, that the two parasites compete to have access to ORF2p proteins. That is, Alu is a parasite of a parasite.

Moran and his team continue to build on their new finding that poly(A) sequences are crucial for retrotransposition. They’re studying how Alu interacts with ORF2p, and how the use of a replacement for the poly(A) tail may be helpful in other research. They’re also interested in how the cell, or host, fights off jumping genes and protects DNA from damage.

“Our DNA is a sea of junk copies of LINE-1 that can’t jump, and a small minority of LINE-1s that can,” says Moran, who is the Gilbert S. Omenn Collegiate Professor of Human Genetics in the U-M Department of Human Genetics. “We need to understand at the RNA level how these LINE-1 RNAs are chosen for jumping, and how we can stop them.”

In addition to Doucet, Wilusz and Moran, the research team includes Tomoichiro Miyoshi, and Ying Liu. Support for the research came from HHMI and the National Institutes of Health, including grant GM060518.